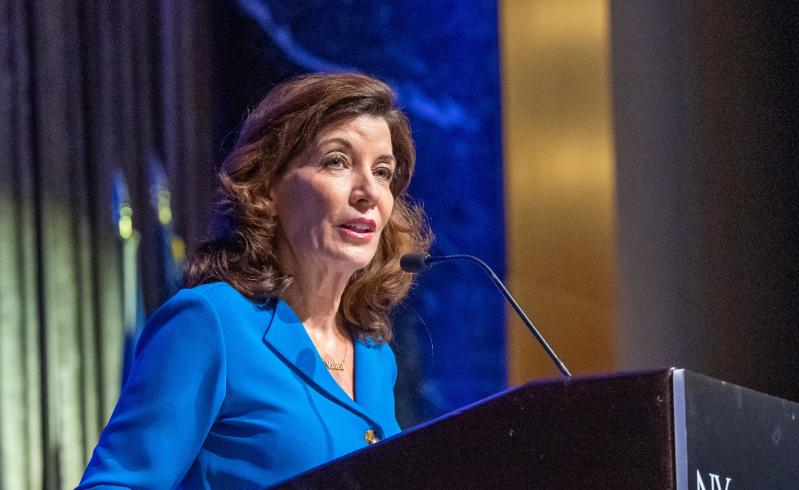 Businesses with fewer than 10 workers, or those that already provide retirement plans, will not be impacted by the new law.

Nilay Oza of Oza Sabbeth Architects of Bridgehampton, is one employer who will be affected by the new law. He was optimistic about its introduction.

"We've wanted to offer a retirement plan in any case, because as a growing business, it helps us attract employees." He explained that in the past the company has had issues with the high fees associated with private 401K plans. Mr. Oza hopes that the Secure Choice Savings Plan, which is being touted as a "low cost" option for businesses, is relatively painless to introduce.

All of the retirement savings in the Secure Choice Plan will come from employee payroll deductions, and employers will not provide matching fees. To implement the plan, small businesses need only work with their payroll provider to add another line to their payroll stub.

The bill, co-introduced by Assemblyman Fred W. Thiele Jr., would give employees a number of investment options to choose from, the default option being a life-cycle fund with a target date based upon the age of the enrollee.

"It's difficult for many workers to save enough for a comfortable retirement, especially if their employer doesn't offer a plan," Assemblyman Thiele said on his website.

According to the bill, unless an employee specifies a contribution level, 3 percent of their wages would be deducted and invested in the I.R.A. Importantly, the I.R.A. is portable, meaning it can be moved from employer to employer. The account wouldn't need to be closed should someone change their occupation.

"This program will give more workers an opportunity to put money aside and prepare for the future," Mr. Thiele pointed out.

The bill also provides for employees to opt out of the program if they're not interested. Should they change their mind and want back in, they could do so during an annual open enrollment period. If employers fail to enroll their employees, there are penalties. They would be fined $250 per employee for each year during which the employee was not enrolled and had not opted out. Those fines could double if left unpaid or if the business fails to enroll its employees.

Assemblyman Robert Rodriguez and State Senator Diane Savino sponsored the bill because of federal inaction on helping people save for retirement. While lack of retirement savings is a national problem, the problem is compounded for New Yorkers because of our high cost of living. According to personalcapital.com, New York ranks 42nd out of the 50 states in average retirement savings.

The automatic nature of the program does mean that it will soon have to be addressed by many of the small businesses on the East End. Coming off the hard times of the pandemic years, that may raise some hackles. But according to an AARP study, automatic enrollment can lead to a 90 percent participation rate. An additional benefit of making the program mandated is that, since employers now are forced to offer retirement plans, they may be more inclined to shop around for the best deals.

For example, there's Mr. Oza of Oza Sabbeth Architects, who plans to use the new mandated program to kick-start his research into retirement plans for his employees. "I'm keen to look into the state-run I.R.A.," he said, "but this will cause us to look into the marketplace as well. I'm glad that it's there."