The East Hampton Star is providing free access to election 2021 coverage. Your visit will not count against the 10-article monthly limit for nonsubscribers. 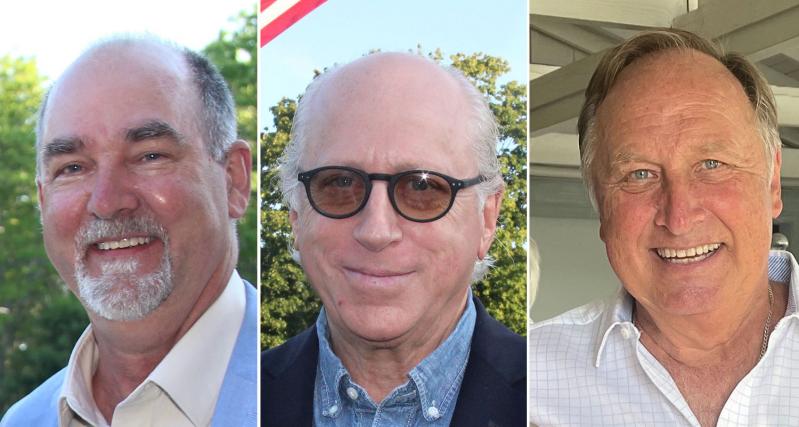 The Nov. 2 election for East Hampton Town supervisor pits onetime allies, the incumbent, Peter Van Scoyoc, and Councilman Jeff Bragman, against each other, with the Republican and Conservative candidate Ken Walles also vying for the top job in town government.

Mr. Van Scoyoc is seeking a third term as supervisor, after serving six years on the town board and, before it, on the planning board and zoning board of appeals.

In a conversation with candidates hosted by the East Hampton Village Preservation Society earlier this month, he said that "getting us through the pandemic" was his biggest accomplishment as supervisor. This included "pulling together over 100 volunteers to administer vaccines" to senior citizens and other residents and help with other tasks on vaccination days. The vaccination rate in the town is high and its per-capita infection rate is the third lowest in Suffolk County.

He also cited his efforts on renewable energy, chiefly the negotiation of easements and a community benefits package with the developers of the South Fork Wind farm and the 1.6-megawatt Accabonac Solar plant. The town also offers incentives for residents to install solar panels through its Energize East Hampton program. Renewable energy is "critically important," he said, given "the devastation climate change is bringing to the community," citing the tens of thousands of trees lost to the southern pine beetle, sea level rise, and coastal erosion. All are "pressing issues that will have significant consequences in the future, and we need to start planning now."

The town government, during his administra-tion, launched a coastal assessment and resiliency planning effort using state grants to engage consultants and "help us analyze areas most at risk, property values most at risk," such as downtown Montauk, he said. With assessing and planning complete, "implementation of those plans is now what needs to happen," he said. This, he said, will mean, in some cases, requiring buildings to be raised or relocated, and creation of more natural shorelines. "The town has had a very aggressive plan for purchas-ing and removing structures on low-lying coastal areas," he said, among them Gerard Drive in Springs.

He also pointed to the preservation of "hundreds of acres of open space" during his tenure, including 32 acres of farmland recently acquired in Amagansett.

East Hampton Airport "has outgrown the footprint the community will accept," he said. The town board must "delve deeply into data, facts, alternatives, options to bring meaningful change to those that are impacted by air traffic." Those impacts "have expanded, I think, exponentially over the last several years. What was a very small recreational airport some decades ago has now morphed into a major regional commuter hub. I don't believe that's compatible with the vision for what East Hampton should be and has been in the past." With control reverting to the town when federal grand assurances expired in September, the board is now discussing its options.

Given the ongoing pandemic, "I don't think it is time to step back, shirk away from the responsibility I've taken on for the last 10 years," he said. "I want to see us through this time. . . . I believe I am well positioned, in fact the best candidate for this particular time."

Councilman Jeff Bragman, an attorney who was elected to the town board in 2017, told the Village Preservation Society's Kathleen Cunningham that he is running for supervisor "for a very simple reason: East Hampton is my home and I want to protect it." In what has become something of a stump speech, he said that "We can't let the houses and the parties get bigger and bigger while the local community gets smaller and smaller." He is inclined to do "anything I can do to make East Hampton calmer, quieter, and slower."

If elected, he pledged to "bring change to the way we do business," charging that the town board has "shortchanged" transparent government and "orderly and thoughtful decision-making." Instead, he said, the board's agenda is presented to the public as "a done deal." The board must "involve the public as soon as possible, because they shape us, inform us, and will tell us if we're off base and tell us if we're on target."

As an example, he charged that his colleagues on the board "hastily decided to put a 185-foot cell tower in a residential neighborhood that was really a woodland preserve," a reference to a plan, now on hold, to erect a monopole to house emergency communications and personal wireless equipment, which galvanized the neighbors' campaign against it. "I listened, looked at the property, and said this is a bad idea," Mr. Bragman said.

He also took credit for urging the installa-tion of on-site water filtration systems for Wainscott residents whose private wells were found to be contaminated. "Eventually, they unanimously agreed with me," he said of his colleagues. When dust storms fouled Amagansett's downtown and forced some businesses to close, "I worked with the farming community, the agriculture committee, and was able to craft a law for cover crops . . . and eventually the town board approved it."

Quality of life is suffering in the town, he said, citing excessive litter, speeding, and noise, the latter in the form of "a $2 million rock concert with a 30-piece marching band" that a billionaire staged last summer on Town Lane. The town's beaches are "getting commercialized," he said, and the special events committee, which regulates gatherings greater than 50 people, should be revised.

He claims "the longest record of anybody on the board in support of local control" of East Hampton Airport "and trying to eliminate not only noise but environment and safety impacts" there. He proposes "an air traffic holiday" of at least a year during which commercial aircraft, helicopters, and jets would be prohibited. The town could assess the results and reopen the airport with new restrictions in place.

The town must take a stand on construction of ever-larger houses, which are changing neighborhoods' character and increasing density, he said, and the zoning code should be updated to address it. That would "set an example that we're still a rural, small town, even though we're very privileged" to have an affluent community with many accomplished residents.

Whether a mew arrival or a lifelong resident, all came because "we're a beautiful seaside town," he said. "I would like it to be calmer, more in keeping with the reason we moved here."

As a businessman who ran hotels here and across the country, Ken Walles of Montauk said in an interview this week that his background in "organization, structure, policies, and procedures" makes him uniquely suited to hold the office of East Hampton Town supervisor.

In his first bid for public office, Mr. Walles said he wants to re-evaluate the inner workings of many aspects of government here, including entities such as the architectural review board, zoning board of appeals, and citizens advisory committees.

"I would like to see some streamlining in those systems and approval processes," he said. "Not shortcuts -- let's make sure it's thorough. I like to be more hands-on. I think I'd be sitting in on more meetings than most supervisors did."

In some of his campaign literature, Mr. Walles said one of his greatest achievements is curing himself of cancer, a diagnosis he received in 2004. He said he did so by adopting a macrobiotic diet and healthy lifestyle. "They want to do something about health care, but health care can't be rectified if people aren't eating right. A lot of people do relate to that. When you relate to personal bodily health, that translates to the health of a community."

Mr. Walles is a native of the UpIsland community of Elmont, first coming out to Montauk for surfing in the 1970s. He said he then traveled extensively as a manager of Hilton and Four Seasons hotels, often overseeing as many as 1,200 employees at once, before settling in Montauk in 1999. That year, he purchased the Oceanside Beach Resort at the west end of the hamlet's downtown. He sold it about five years ago.

Now, he said, it's time to give back to the local community.

"I have a basic understanding of logical management and common sense," he said. "You're there to serve the people and provide them with what they need. I don't have an ego. . . . I think I've accomplished a lot in my life. Now it's time to straighten things out."

He said if elected, he would seek to increase representation in the town's hamlets, possibly by adding two more town board seats. He supports keeping the East Hampton Airport open, turning on the dormant cellphone communications tower at the Springs Fire Department headquarters, a sewer system in downtown Montauk, and a moratorium on building oversized houses in Amagansett. He also said he supports the idea of work force housing and suggested dormitory-style units that could house seasonal workers several months out of the year.

Mr. Walles has not participated in televised virtual debates because "I don't find a Zoom debate a debate. I'd like to see more spontaneity. . . . It's got to be real-time and direct," instead of candidates being able to look at their notes. He said his suggestion of an outdoor debate was ignored.

Asked how closely he identifies with the stances of the national Republican Party and with Lee Zeldin, the congressman running for New York State governor, he said he is "focused on local."

"I don't like politics. I don't like what the Republicans and Democrats are doing," Mr. Walles said. "I do believe in the 'deep state' -- they're playing both sides, and the ones that suffer are us. All I can do is a small part locally and say who cares what's going on in the outside."