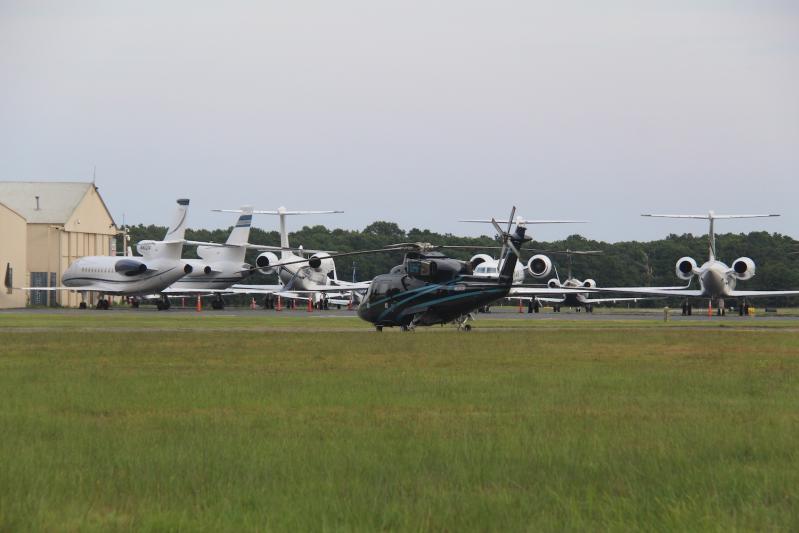 To close and reopen the airport, East Hampton Town would have to undergo a deactivation process with the F.A.A., according to Bill O'Conner of the Cooley law firm, who is advising the town on airport matters.
Durell Godfrey
By Christopher Walsh

The East Hampton Town Board appears likely to temporarily close East Hampton Airport and reopen it as a publicly owned, private-use airport, with the understanding that conditions would have to be monitored for any unintended consequences of its goal to reduce noise and pollution.

Bill O'Conner of the Cooley law firm, which is advising the board as to imposing changes at the airport following last month's expiration of federal grant assurances, walked the board through a multitude of options on Tuesday.

A majority of the board looked favorably on a middle path between continuing operations as is and closing the airport permanently.

Tuesday's work session was the latest in which a re-envisioning of the airport was considered, following sessions in May, July, August, September, and earlier this month. Four workshops were also held in September, during which members of the public weighed in as to their wishes for the airport's future.

With the expiration of federal grant assurances, the town can close the airport, use remaining money in the airport account as it desires, and repurpose its 600 acres. But, Mr. O'Conner said, "You do have the option to change the use of the airport from public to private use." While it would remain publicly owned, the airport "won't be generally opened to the public," he said, rather usable only with permission from the town.

To close and reopen the airport, the town would have to undergo a deactivation process with the F.A.A., Mr. O'Conner said, describing a "straightforward legal process." But "as a practical matter, a lot more thought needs to go into how this would work, what it would look like, and how long it would remain closed."

The airport would be closed to all operations for a duration to be determined, he said. The town would then implement a system of authorized rights or prior permission required, or P.P.R., for operational use. "This is easy to say, but hard to do," he said. "Some tough choices are going to have to be made in terms of what that system will look like." Before reopening the airport, the town could make modifications, such as shortening runways, he said.

A prior-permissions-required model offers flexibility to grant, remove, and revise permissions at a private-use airport, Mr. O'Conner said. "Flexibility is what's most attractive about a private-use airport that implements a P.P.R. framework." Permissions can include authorized rights for certain users and/or managed permissions under a plan administered by the town. That authority could be delegated to Jim Brundige, the town's airport director, he said.

Should the town reopen it as a private-use airport, it would need to set specific policies for permissions to use it, including rules governing types of permitted use, enforcement mechanisms to ensure compliance, and a way to amend rules and permissions as more is learned about the airport's operation.

The town could choose to implement curfews with enhanced weekend hours to constrain operations, Mr. O'Conner said, or reduce runway length "to something more compatible with aircraft you'd like to see at the airport." It could provide blanket authorization for small aircraft, and be made available to all medevac aircraft. It could prohibit, or limit, commercial aircraft, he said. One approach, he said, would be to determine the desired reduction of certain types of operations, "and we figure out how." The town could simply refuse permission for certain aircraft types, enact restrictions based on noise, increase airport fees, or incentivize electric aircraft and aircraft using unleaded fuel, both expected to be introduced in the near future.

It will be important to continue to engage the F.A.A., Mr. O'Conner said. "They have to be our partners in terms of procedural aspects." The board, he said, must determine the initial parameters for a private-use airport, should it choose that option. "It will take some time to understand what the operations will look like after changes are made to the airport."

Revenue will be diminished should operations at the airport be reduced by prohibiting the heaviest aircraft, which pay the highest fees. "Spreading out costs among those granted permission to use the airport in a rational way is something you can do," Mr. O'Conner said, with the understanding that the town "may have to adjust fees" in order for the airport to remain self-sustaining. "There may be a deficit, for example, in the first year."

Supervisor Peter Van Scoyoc advocated a temporary closure and reopening. The first question to address, he said, is "whether or not we have consensus over the issue of closing for a short period of time." He suggested that a closure happen in the winter, when the airport sees the least use, before a reopening as a publicly owned, private-use airport.

Councilwoman Sylvia Overby reminded her colleagues that the board, having declared a climate emergency earlier this year, must consider the airport's environmental impact in its deliberations. The board, Mr. O'Conner said, can set policies and goals consistent with that declaration. That could include phasing out certain types of aircraft, or phasing in "green aircraft."

The discussion included the question of how closure or restrictions at East Hampton Airport would affect Montauk and its smaller, privately owned airport, to which aircraft might be diverted. "Montauk really wants what everybody else in town wants," said Councilman Jeff Bragman, who attended a meeting about the airport at the hamlet's firehouse on Sunday. "They do not want helicopters destroying peace and tranquillity. One town, one problem, one solution. I think what Montauk wants to hear is that we have their back and that we will be protecting them."