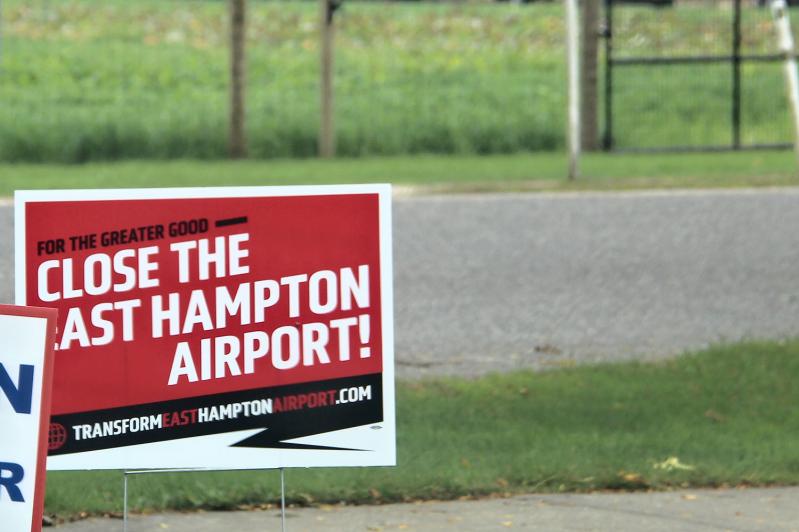 As East Hampton Town debates the future of the airport, signs and ads both for and against the facility are popping up around town, on TV, and on social media.
Durell Godfrey
By Christopher Walsh

A review of the East Hampton Town Board’s public engagement process with respect to a re-envisioning of East Hampton Airport was aired at the board’s work session on Tuesday, weeks after four virtual workshops saw hundreds of participants, most of them adamant that the airport must change, either through its permanent closure or a temporary closure followed by a reopening with restrictions and curfews in place.

The town supervisor, meanwhile, said he sees a compromise solution that would prevent a complete shutdown.

With last month’s expiration of Federal Aviation Administration grant assurances, the town can take control of the airport. It could allow operations to continue as they are, enact restrictions or curfews on air traffic such as the elimination of commercial flights, close the airport and reopen it with new restrictions in place, or close the airport permanently and repurpose the site.

The proliferation of helicopter and jet traffic into and out of the airport has driven mounting opposition, with many residents stating that the airport has outgrown its initial purpose. While some favor its complete closure, others feel it should serve only local, recreational pilots.

Lisa Liquori, a consultant to the town on the airport’s future, told the board that 303 people had participated in the workshops. Noise, pollution, safety, and quality of life were cited by workshop participants who favor the airport’s closure, said Peter Flinker, another consultant to the town. But those who favor keeping it open, most of them connected to the aviation industry, called the airport an important community resource and economic engine that provides jobs and delivers customers to the town’s businesses.

Twenty percent favor the airport’s closure, Mr. Flinker said, with the rest supporting its continued existence but with restrictions. Many, particularly residents of Montauk, voiced the concern that closing it would only divert air traffic, and particularly helicopter traffic, to Montauk’s smaller, privately owned airport.

The presentation closely followed the issuance, on Monday, of Supervisor Peter Van Scoyoc’s own proposals to curb aircraft noise and traffic in East Hampton and Montauk. “I propose that we immediately impose curfews and take other similar steps that we know will not cause air traffic from East Hampton Airport to be diverted to the Montauk Airport,” he said. “Additional restrictions that will target specific aircraft operations that cause the most pain and disruption to our residents will follow.”

Mr. Van Scoyoc said in his statement that he has “engaged the ownership of the Montauk Airport and I am optimistic these discussions will ultimately be productive. I anticipate that by the end of January, depending on what the final results of our studies show, we will largely reduce or eliminate commercial helicopter and jet traffic, preventing the need to close the East Hampton Airport completely.”

Montauk United, a group that has been particularly vocal in its fear that closing the airport would divert traffic to the hamlet, will host a meeting at the Montauk Firehouse on Sunday at 1 p.m.

In the consultants’ summary of comments, suggestions for the airport included reducing the length of a runway, eliminating one or more runways, and the elimination of fueling services. The airport might be restricted to local pilots and recreational aircraft and emergency use, with helicopters, jets, seaplanes, and drones banned. Another suggestion was that only the noisiest types of aircraft be prohibited.

Other suggestions included the imposition of curfews, or limits placed on the number of aircraft operations per hour, day, or year. Minimum altitudes could be mandated, and routes, which are now voluntary, could be regulated and adjusted. Another suggestion was that landing fees be adjusted to incentivize quieter aircraft.

The consultants are to prepare a summary report, including a description and assessment of positions and underlying interests of stakeholders on all sides of the issue, a description of key issues and opportunities to be addressed during the re-envisioning process, and a discussion of the fact-finding process with recommendations for further study.

Representatives from Cooley L.L.P., the town’s outside counsel on airport matters, will discuss potential restrictions and other actions at the board’s work session on Tuesday.