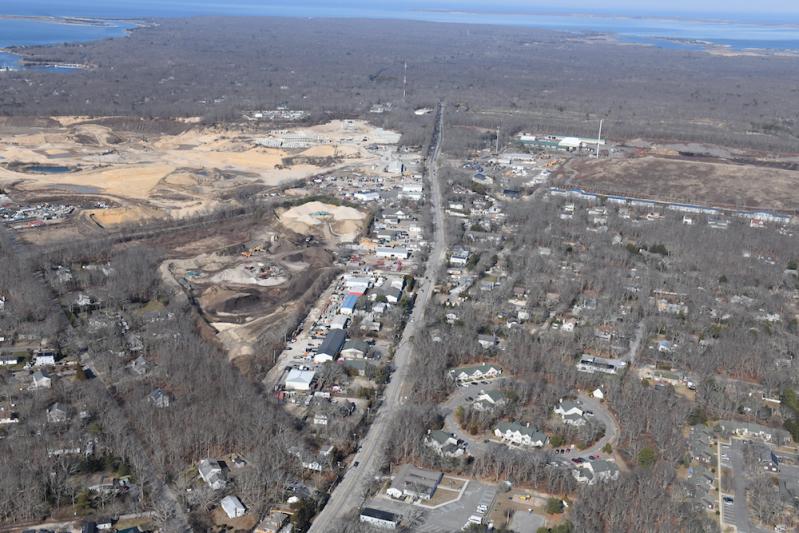 Springs-Fireplace Road, looking north toward Springs, in February of this year. A team of consultants is collecting and analyzing existing conditions, projected buildout, and other issues facing the commercial-industrial-residential area.
Doug Kuntz
By Christopher Walsh

Land use trends, traffic, pollution, and future growth potential were among the matters considered on Sept. 8, when the East Hampton Town Board was updated on an ongoing evaluation of issues affecting the Springs-Fireplace Road corridor.

A team of consultants is collecting and analyzing existing conditions, projected buildout, and other issues facing the commercial-industrial-residential area, with the goal of developing short and long-range plans to improve its functionality and visual character while reducing potential threats to the environment.

The study, which followed a larger review of all of the town's hamlets, was launched with a February workshop at the Springs Library. "Two weeks later, Covid struck," said Councilwoman Kathee Burke-Gonzalez, liaison to the hamlet's citizens advisory committee, curtailing nonessential activities for months.

The workshop illuminated a "long list of problem areas" that "add up to major headaches," according to the consultants' virtual PowerPoint presentation. Vehicular traffic, particularly large trucks, present a "complicated traffic issue," said Peter Flinker of Dodson & Flinker, one that is "particularly magnified at intersections." Town facilities in the corridor add to that truck traffic. "People want to see a balance of growth," he said, limiting it, but also allowing for roads and intersections to accept further traffic.

Dirt, dust, and odors are impacting the quality of life in the corridor, Mr. Flinker said, and raising concern about public health. There is also concern about groundwater pollution, particularly in the area around the capped landfill. The Suffolk County Water Authority, said Lisa Liquori of Fine Arts and Sciences, is conducting a survey of private wells. The results have been delayed due to the pandemic, she said, but could come next month. When they do, the consultants will analyze them and draft recommendations to safeguard drinking water resources, she said. Ms. Liquori is a former director of the town's Planning Department.

By subtracting existing developed lots and town-owned land and reviewing recently approved and in-process building permits, the consultants determined that there are approximately 275 developable acres in the study area, comprising 182 parcels ranging from 2,000 square feet to 62 acres. All but 13 are under two acres.

Under current zoning, future growth could include 100 to 110 existing and new lots in residential zones. Separately, the town has proposed an affordable housing project of up to 60 units on recently purchased property off Three Mile Harbor Road.

Commercial-industrial buildout will be limited by existing uses. Market demand, economic feasibility, and engineering constraints will determine future commercial-industrial development, Mr. Flinker said. Based on what is possible, "We're trying to estimate what are the environmental impacts of this, and what are traffic impacts?"

Takeaways from the February workshop included support for roadway improvements and landscaping, such as trees and other vegetation to screen industrial uses, and integration of pedestrian connections, trails, and green spaces with their surroundings. A roundabout at the awkward intersection of Springs-Fireplace Road, Three Mile Harbor Road, and North Main Street should be considered, participants said.

Because the Long Island Rail Road was replacing trestles over North Main Street and Accabonac Road last year, altering traffic patterns, it was determined that the 2015 and 2016 studies would be used to project traffic 10 and 20 years into the future, using the New York Metropolitan Transportation Council's best-practices model. That, Mr. DiBiase said, projected an annual growth rate of .71 percent, or 14.2 percent over 20 years, the highest rate on Long Island.

Based on the study, "We'll end up with a wish list of improvements for roadways and other things affecting transportation" for vehicles, pedestrians, and cyclists, he said. The pandemic will affect future traffic predictions, he said, in the form of the possible permanent work-from-home status of residents, an increase in school enrollment resulting from second-home owners relocating here, the failure of some retail businesses, and offices relocating from downtown areas.

"Autonomous vehicles are on the way, within the period of this study," he added, meaning that fewer parking spaces will be needed. Federal or state monies could be obtained for identified improvements.