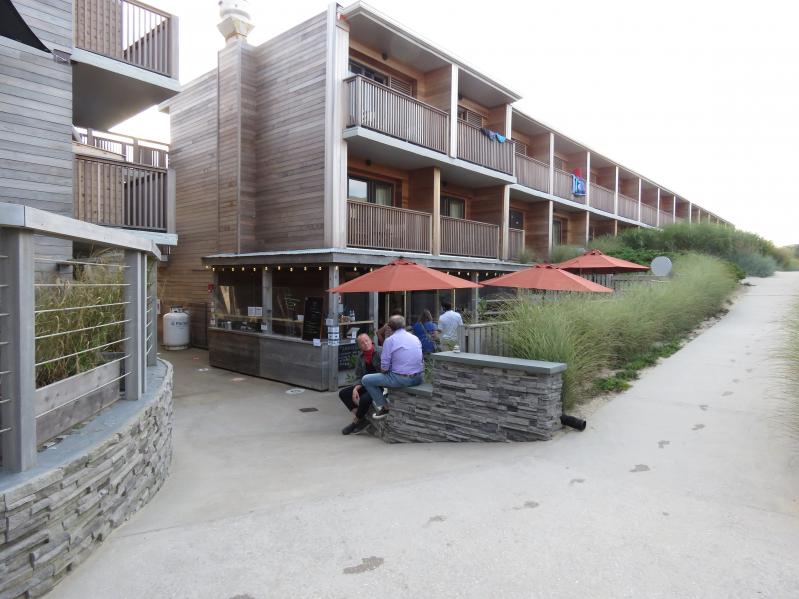 Marram Montauk on Friday. According to the Marram website, the restaurant Mostrador Marram is serving breakfast, lunch, and dinner, with guest chefs for the summer from the Manhattan restaurant Il Buco.
Jane Bimson
By Christopher Walsh

Citing "multiple ongoing violations," East Hampton Town is seeking an injunction in State Supreme Court to prohibit the 96-room Marram Montauk resort on the downtown oceanfront from continuing to use unapproved bar areas and a snack bar that the town said was converted to a full-service restaurant without approval.

According to the website for Marram, formerly the Atlantic Terrace, a restaurant called Mostrador Marram, serving breakfast, lunch, and dinner, is operating on the site, with guest chefs for the summer from the Lower Manhattan restaurant Il Buco. The bar areas and the restaurant, which has an expanded outdoor cooking area, are operating in violation of town code, the town said in a release on Friday.

The town issued charges against Marram on July 14 and July 18 relatedÊto the outdoor bar and cooking area, as well as awnings. TheÊcharges, which will be heard in East Hampton Town Justice Court, include citations for lack of site plan approval, lack of a building permit, and failure to obtain a certificate of occupancy and a tent permit.

A July 27 inspection by the Suffolk County Health Department found violations including the addition of an outdoor barbecue grill cooking station in the parking lot, which is prohibited, and other additions, including indoor and outdoor bars constructed without the required Health Department approval. The county also noted that the restaurant was operating without a designated person in charge who holds a food safety/food protection certificate, according to the statement from Town Hall. Marram is on Oceanview Terrace, in a residential zone.

"Our community standards, which include protecting the sanctity of residential neighborhoods and public access to our beaches, are reflected in the adopted town codes," Supervisor Peter Van Scoyoc said in the statement. "Businesses that operate contrary to those codes are not acting as good neighbors, and such actions will not be allowed to continue."

But Eric Bregman, an attorney representing the resort, pushed back on the charges. "The town's complaint against the Marram Hotel is filled with misleading statements and omits and misstates critical facts," he said.Ê"The issues actually raised by the town relate to administrative questions as to whether the proper paperwork has been submitted for the food and beverage services offered by the hotel. We believe that the paperwork is proper and intend to fight the town's attempt to claim that longstanding structures and food and beverage service are somehow 'new' and require new permits and approvals."

Neighbors of the resort have also raised concerns about Marram's commercial use of the public beach, exclusively for its guests. Mr. Bregman said that that charge, too, was unfounded. The town, he said, "issued a press release claiming that the hotel has restricted access to the beach in front of its property. This is absolutely false."

Bridgeton Holdings, which owns Marram Montauk and the Hero Beach Club in Montauk as well as the Journey East Hampton hotel in East Hampton, applied in early March for a liquor license from the state, a move that drew opposition from town officials.

The resort's plan for a restaurant and bar, with the intent to host special events featuring live and recorded music as well as dancing, presented the very scenario neighbors have warned of since Bridgeton Holdings bought the resort in 2018.

The resort use of the land began before the town zoning code was established. As The Star reported in May, the Montauk Atlantic Terrace Hotel Operating Group and Bridgeton Hotel Management, doing business as Marram — "a barefoot luxury boutique resort" according to its website — and Mostrador Marram provided the town with the required 30-day advance notice of the application to the State Liquor Authority.

In a March 17 letter to the S.L.A., NancyLynn Thiele, an assistant town attorney, wrote that "although there is a hotel, there is no restaurant for use by the guests. The only food service is a 'snack bar for retail use only.' "

Ms. Thiele suggested at the time that the applicant might ask the state to interpret a 1968 zoning board of appeals determination "to indicate that they have approval for bar use, but," she stressed, "that variance was for a physical structure — a counter across which alcoholic drinks or refreshments can be served." The structure has long existed, "but it has not been approved for the service of food or alcohol for decades," and, she noted, the property's zoning changed from commercial to residential subsequent to the 1968 determination. It appears to be an abandoned pre-existing use, she wrote.

With Reporting by Jamie Bufalino
--
Note: This article has been updated since it originally appeared online.