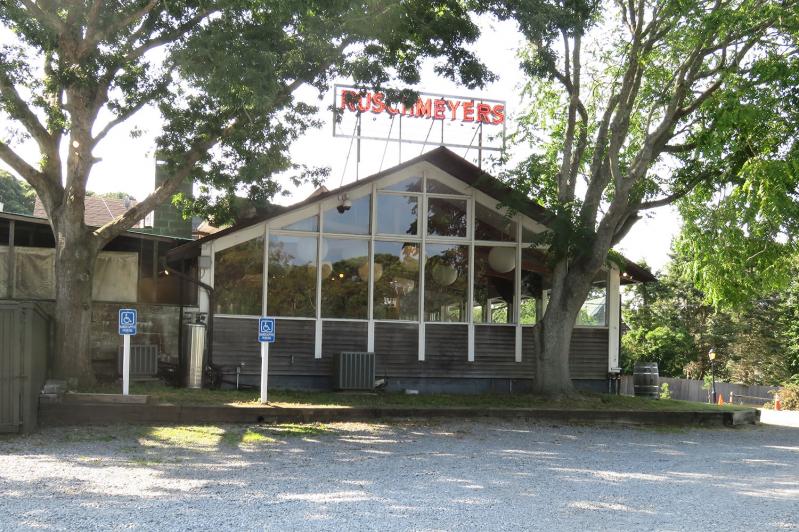 Ruschmeyer’s in Montauk is having quite the busy summer and is weighing whether to extend its season past Thanksgiving this year.
Jane Bimson
By Christine Sampson Anabel Sosa

The giant sparklers may have stopped, but the fireworks continue for Ruschmeyer's Hotel and Restaurant in Montauk.

"What they ran into was the realization that the way they wanted to run a business didn't conform to the way the town requires people to run businesses," East Hampton Town Supervisor Peter Van Scoyoc said last week. Among the citations issued to Ruschmeyer's, he said, were a noise violation and an illegal fireworks violation for the alleged possession of a case of 150 oversize sparklers.

The owner of Ruschmeyer's, Vincenzo Lentini, was one of three Montauk restaurant personnel issued an appearance ticket on July 4 on low-level charges related to liquor storage and signs. In an interview last week, Mr. Lentini called the charges unfair and suggested they were "an attempt to put every business on notice that anything they find, they can pull your liquor license."

"There was some concern that maybe they were expanding their commercial use there," Mr. Van Scoyoc said. "We did send enforcement personnel to investigate and there are charges that are pending as a result, the nature of which I can't really speak to."

After a handful of noise complaints in July, the most recent incident documented by East Hampton Town Police was an alleged Covid-19 violation at Ruschmeyer's on Aug. 3 in the afternoon.

Photographs taken of the scene earlier this summer show dozens of cars clogging the roadside outside both properties. One distraught neighbor, Tom Melore, took matters into his own hands by making a conspicuous sign that read "COVID party," with an arrow pointing in the direction of the properties. Mr. Melore said a manager of the club went onto his property and removed the sign.

"I needed to draw attention to them," Mr. Melore said last month. "Saturday night, they kept me up with the noise. If I don't do something they'll continue."

"It's really apparent what's been going on with certain establishments," said Glenn Glasser, a resident of Second House Road who said he witnessed hundreds of blue plastic cups scattered on the road last month. "The police don't have enough help and we don't feel we're being heard."

While the house is owned by Ruschmeyer's Hospitality Group, Mr. Lentini disputed the allegation that it is a party house. He said he hired a property management company to rent it to visitors, not staff members, and that it has a rental registry number in accordance with East Hampton Town rules.

After Etiquette was axed, Mr. Lentini called the situation "frustrating."

"We hired 11 security people to make sure everyone stayed at their tables and conformed to Covid rules so nobody would be harmed or put in jeopardy," he said. "Even with that, they found a way to get us. We took all necessary precautions. We had two security guards just by the bathrooms to make sure people had a mask on. It was more like babysitting."

"You're trying to operate a business. You're trying to make a living in a seasonal business," Mr. Lentini later continued. "It's a short season to begin with and it's got challenges because of Covid. The Police Department, fire marshal, State Liquor Authority -- they're breathing down your neck, almost like they don't want you here. We're generating revenue, paying taxes, employing people."

Ruschmeyer's is weighing extending its season past Thanksgiving. Customer traffic is higher this year, Mr. Lentini said. "But it dies down earlier, I've noticed, because of all the restrictions. I've never seen Montauk closed so early -- 11 o'clock," he said.