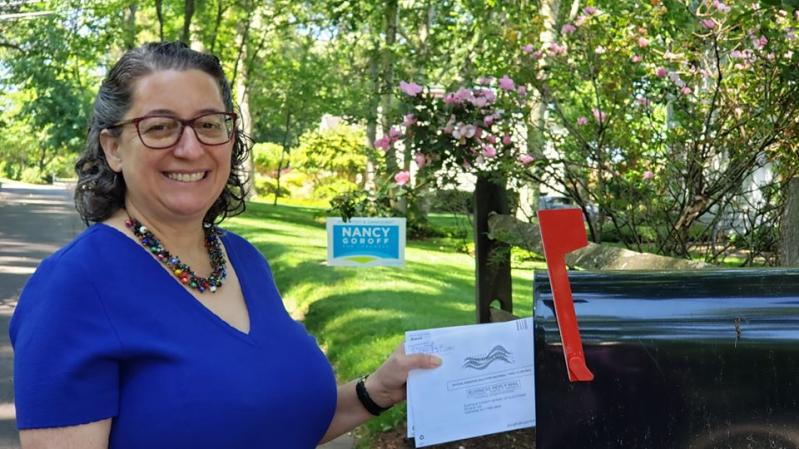 Nancy Goroff in a photograph posted on her Twitter account during the 2020 primary in New York State. She is the apparent winner among a four-Democrat field to face Representative Lee Zeldin in November.
By Christopher Walsh

Update, June 16, 10 a.m.: Nancy Goroff, a political newcomer who declared her candidacy for the Democratic nomination to challenge Representative Lee Zeldin in New York’s First Congressional District one year ago, is the official winner of the June 23 primary election.

Ms. Goroff’s challengers for the nomination, Perry Gershon and Suffolk County Legislator Bridget Fleming, conceded the race last Thursday, and an official at the Suffolk County Board of Elections said yesterday that the result had been certified. Absentee ballots, which represented the majority of votes cast in the primary election because of the Covid-19 pandemic, were counted last week.

Democrats will hold a “unity party” featuring Ms. Goroff, Mr. Gershon, and Ms. Fleming as well as the actor Alec Baldwin, who lives in Amagansett, on Saturday at 5 p.m. via Zoom. East Hampton Town Councilwoman Sylvia Overby is a member of the rally’s host committee. Registration is at bit.ly/38UrOPy.

As they did in 2018, when Mr. Gershon, as the Democrats’ nominee, lost to Mr. Zeldin by four percentage points in a “blue wave” election that saw Democrats retake a majority in the House of Representatives with a net gain of 40 seats, the Cook Political Report and Sabato’s Crystal Ball list the district as “likely Republican” and “leans Republican,” respectively.

Nonetheless, “Zeldin, now having tied himself so tightly to the president, is more vulnerable than he’s ever been,” Ms. Goroff, who is on leave from her position as chairwoman of Stony Brook University’s chemistry department, told The Star on Tuesday. “We think the district has moved away from Trump. We’ve seen polling that shows Trump losing to Biden in the district,” she said, an indication that Mr. Zeldin’s fervent support for the president could be more liability than asset in 2020.

With the Nov. 3 election just three and a half months away, Ms. Goroff said the Cook and Sabato forecasts “don’t reflect accurately what’s really going on here. The energy and enthusiasm are overwhelming on the side of getting rid of Zeldin and getting rid of Trump. In Zeldin’s case, he has done very, very little, essentially nothing, for the district. He’s been so busy going on cable [television] to defend the president and tweeting about [New York City Mayor] Bill de Blasio instead of focusing on issues that are here.”

Mr. Zeldin, who is seeking a fourth term, “even went to Tulsa without a mask,” she said, referring to the president’s June 20 rally, which Mr. Zeldin attended without wearing a face covering. “How you can represent this district and think that’s an appropriate thing to do, I don’t know.”

Mr. Zeldin issued a statement via email last Thursday expressing a spirit of bipartisanship, but observing, “America is at a crossroads, with many in our country pushing to ‘defund,’ ‘disband,’ ‘dismantle,’ or ‘abolish’ our police departments, institute a federal government takeover of our health care system, implement a disastrously flawed ‘Green New Deal,’ and raise our taxes the likes of which we’ve never seen. . . . We can’t let that happen.”

Tom Emmer, chairman of the National Republican Congressional Committee, said in an email on Monday that Mr. Zeldin “continues to deliver for Long Island families in Congress by putting them first.” Voters, he asserted, “will reject Nancy Goroff, who is a far-left radical and would be nothing but a rubber stamp for Nancy Pelosi’s socialist agenda.” He did not respond to an email asking for evidence supporting those statements.

Mr. Gershon wrote on Facebook last Thursday that he had called to congratulate Ms. Goroff. “I loved meeting with thousands of people over the last few years and discussing how we can make things better for our families here in Suffolk,” he wrote. “That journey goes on. Lee Zeldin continues to let us down in addressing Suffolk’s problems, and I am confident that Nancy will offer real solutions.”

Ms. Fleming, who lives in Noyac, said she was “proud of the campaign we ran” in an email thanking her staff, volunteers, and supporters. “You truly gave me the energy to keep fighting despite a global pandemic and the barrage of outside spending in this race. . . . I have called Nancy Goroff to congratulate her, and I look forward to supporting her as the Democratic nominee in the November election against our common foe Lee Zeldin — an absentee congressman who cares more about Donald Trump’s adoration than he does the people of the First Congressional District.”

In other primary election news, Laura Ahearn, one of five Democratic candidates in the race to challenge Assemblyman Anthony Palumbo in the state’s First Senatorial District, declared victory last week, and an official at the Board of Elections confirmed that result yesterday.

Ms. Ahearn, an attorney and social worker who lives in Port Jefferson, led four challengers, among them Southampton Town Councilman Tommy John Schiavoni of North Haven, in the unofficial count of in-person votes. She and Mr. Palumbo will face off in the general election to succeed State Senator Kenneth P. LaValle, who is retiring.

In the Second Congressional District, which straddles southwestern Suffolk and a small portion of southeastern Nassau County, former Babylon Town Councilwoman Jackie Gordon won the Democratic primary election, and Assemblyman Andrew Garbarino was the victor in the Republican primary. They will face off in the general election to replace Representative Peter King, who is retiring after 14 terms.

The Republican primary election in the Third Congressional District, which extends from northwestern Suffolk across northern Nassau and into northeastern Queens, was canceled. The party’s candidate, George Santos, will challenge Representative Tom Suozzi, who is seeking re-election after fending off two challengers in the Democratic primary election.
--
Note: This article has been updated since it first appeared online.