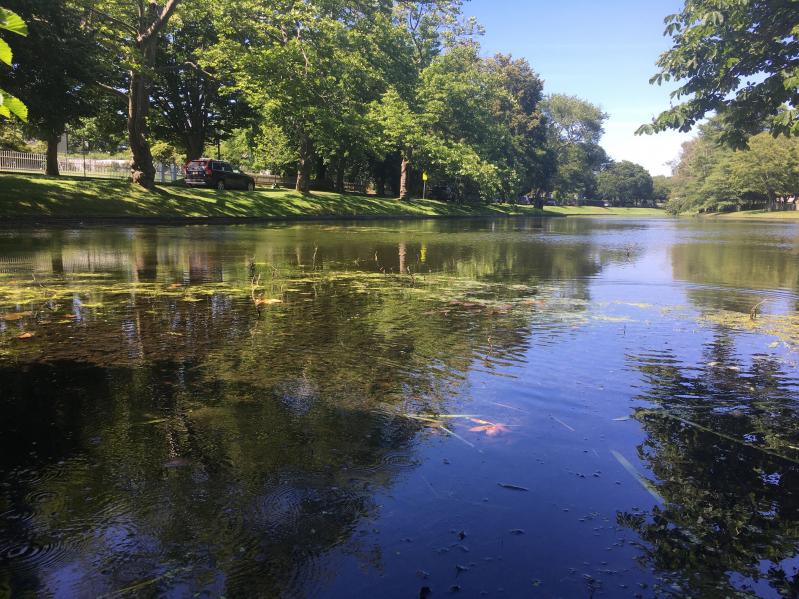 Town Pond in East Hampton on Thursday. After a debate, the village board has approved costly plan to remove clogging silt.
David E. Rattray
By Jamie Bufalino

An $863,500 proposal to dredge Town Pond led to a heated discussion about budget priorities at last Thursday's virtual meeting of the East Hampton Village Board. According to Becky Molinaro Hansen, the village administrator, the village plans to borrow money for the dredging by issuing a bond next spring. The interest payments would not be due until the fiscal year 2021-2022.

In early June, the board had approved what trustees deemed a conservative budget of $23 million for the 2020-2021 fiscal year. Due to concerns about the possible economic impact of the Covid-19 pandemic in the months ahead, the budget did not allow for spending on any major capital improvements, public works projects, or equipment upgrades.

A vote on the bid to dredge the pond, submitted by Patrick Bistrian Inc., was the last item on last Thursday's agenda. Earlier in the meeting, Arthur Graham, a trustee, had expressed concern about the cost of the proposal, wondering also if it would derail other initiatives, among them the renovation of the "unusable" Herrick Park tennis courts, or the replacement of Department of Public Works equipment such as a "marginally useful" street sweeper, and dump trucks that have holes in them.

"I'm all in favor of dredging the pond, but I think there are several other things that we probably need to do as well," said Mr. Graham, who is a candidate for mayor in the Sept. 15 election.

Rose Brown, his colleague and a fellow member of the Fish Hooks Party, echoed his concern, and noted that the village had other major infrastructure issues to address, including improving drainage and following through on plans to redesign the entirety of Herrick Park.

"We're all in agreement that we need to do these other projects," said Deputy Mayor Barbara Borsack, who is also a mayoral candidate, running on the Elms Party line. "If we're going to be borrowing money for a capital project like this, we should figure out what other things we need to do and make it part of one big capital project."

Mayor Richard Lawler, an Elms Party member who is running to reclaim his former trustee seat in the election, agreed, but said he wanted to wait to discuss the other projects. "Right now, we're addressing this particular resolution," he said, "and the other items will be put on the agenda at the appropriate time, and we'll have a chance to discuss those. We'd like to include them all in a single bond issuance if we can."

"I just want to make sure that we actually do that," Mr. Graham replied.

Ultimately, the Bistrian bid was approved by unanimous vote.

Board members made it clear that they will grant an easement to allow Robert Rattenni, the owner of a commercial building at 55 Main Street, to install an advanced nitrogen-reducing septic system under the Reutershan parking lot. Mr. Rattenni is seeking to upgrade the building's existing septic system to accommodate increased use. He had initially proposed installing a new conventional system, but opted for a more environmentally friendly one at the village's urging, said Billy Hajek, the village planner.

The Juice Press shop is a tenant in the building, and the new system will allow it to prepare its juices on site. And if the Juice Press leaves, Mr. Rattenni said, "we'll have the option to put an ice cream shop or coffee bar there." The installation will take place next spring, he said, and will require about two weeks of work. The board will vote on a resolution to approve the easement on July 31.

Citing the pandemic, the board also intends to make a temporary adjustment to a pension-like incentive program for volunteer members of the East Hampton Village Ambulance Association and Fire Department. The length-of-service awards program, known as LOSAP, is a financial benefit provided to ambulance association volunteers once they reach retirement age. To qualify for the benefit, members must take part in a required number of response calls, training courses, meetings, and other activities each year. Because of Covid-19, however, many members, for safety reasons, have not been able to meet those requirements, so the state is allowing municipalities to lower the threshold for qualification.

The adjustment is "a small way of saying thank you to volunteers," said Lisa Charde, the chief of the ambulance association. The organization's 40 members respond to about 1,300 calls per year, she said.

Members of the fire department have been busier than ever because of the pandemic, said Chief Gerard Turza Jr. "Our call volume has skyrocketed ╤ and our members have not skipped a beat," he told the board members.