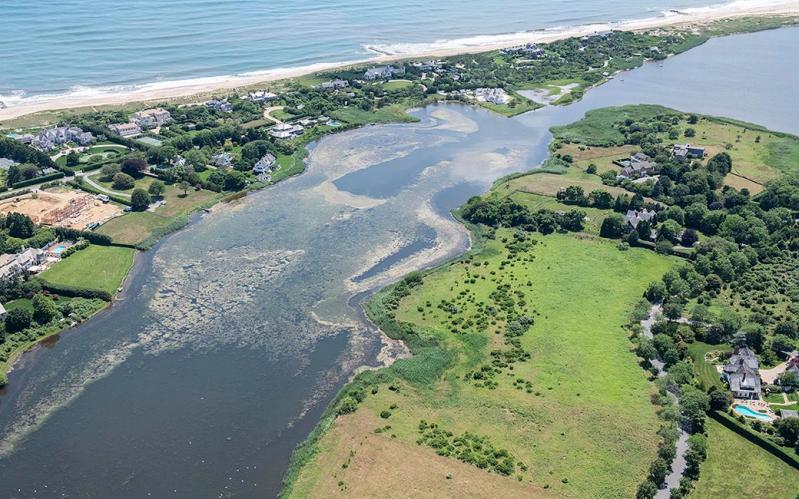 The East Hampton Town Trustees and the Friends of Georgica Pond Foundation have applied to the New York State Department of Environmental Conservation and the town board for emergency authorization to use an aquatic weed harvester in the Georgica Cove section of Georgica Pond.

The move is an effort to address a “major bloom of macroalgae and macrophytes,” said Sara Davison, executive director of the foundation, a group of pondfront property owners who got together to develop and implement initiatives to alleviate the pond’s degraded water quality, which every summer since 2012 has included toxic cyanobacteria, or blue-green algae.

Georgica Pond is eutrophic, with excessive nitrogen inputs from ground and surface water runoff feeding dense plant life, the decomposition of which is blamed for choking the pond of oxygen. The present bloom of macroalgae and macrophytes has resulted in hypoxia, or low levels of dissolved oxygen, at night, which promotes fish kills and harmful algal blooms.

The application for emergency authorization was submitted on Monday, Jim Grimes of the trustees told his colleagues during their meeting via video conference. The D.E.C. responded that it had been distributed to its analysts, he said. “As per a conversation with Sara a few days ago, the hope is they’ll issue an emergency permit sometime toward the latter part of this week.” One “can virtually walk on” the water in the cove, he said. “It’s really a mess.”

Ms. Davison, who told The Star that two experienced sailors have gotten stuck in the cove because of the dense vegetation, said the foundation also hopes for a decision this week. At present, the condition exists only in the cove and not in the wider pond, she said.

The harvester was used in the pond during the summers of 2016 to 2018, removing large quantities of macroalgae. Its use is widely believed to have had a direct benefit on the pond’s water quality. The town prohibits motorized craft on the pond, however, and the harvester’s use requires an exemption. Ms. Davison said the foundation is still awaiting a tidal wetlands permit from the D.E.C. and a natural resources permit from the town to use the harvester “but [does not] expect them to decide for months,” hence the application for emergency authorization.

The trustees historically open the pond to the Atlantic Ocean biannually, in the spring and fall, which serves to flush it of toxins, increase circulation, and reduce the volume of water. The opening closes naturally, though the span in which it remains open varies. Last year it remained open to the ocean until July 25, longer than is typical, and the water quality remained high throughout the summer.

The trustees mused aloud on Monday about midsummer openings of the pond. The annual nesting of piping plovers and least terns in the area, both protected shorebirds, could complicate such an effort, however.

It is a shame, said Rick Drew of the trustees, to see how conditions in the pond “have deteriorated so much when we made so much progress” since the trustees and the foundation, having engaged Christopher Gobler of Stony Brook University’s School of Marine and Atmospheric Sciences, undertook efforts to improve the pond’s degraded water quality. Fishing and crabbing were productive, sailing and water sports were safe, and “the pond was getting back to its former self.”

Excessive nutrient loading remains a problem, Mr. Drew said. As a result, a lot of vegetation is growing in the pond and turning to macroalgae. “It’s important we get the harvester back . . . so we can deal with this excess material.”