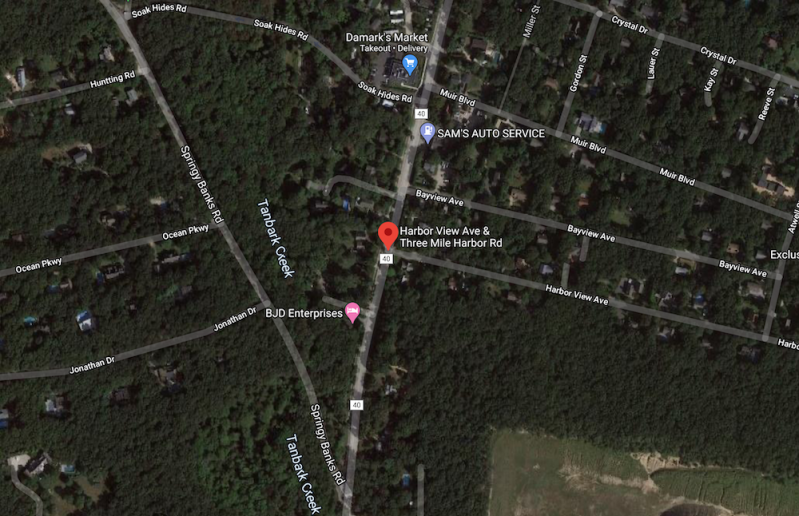 The region in the area of Harbor View Avenue and Three Mile Harbor Road may see an affordable housing project.
Google Maps
By Christopher Walsh

The East Hampton Town Board held its most substantive discussion to date about rezoning a narrow 14.2-acre undeveloped site off Three Mile Harbor Road in East Hampton on Tuesday. As many as 60 units of affordable housing could be built there.

The East Hampton Housing Authority has proposed an affordable housing overlay district at 286 and 290 Three Mile Harbor Road, adjoining the Bistrian Gravel Corporation to the south and Harbor View Avenue to the north. The housing authority would be partners in the project with Georgica Green Ventures, a private developer, as they are in Gansett Meadow, the 37-unit affordable housing complex now under construction on Montauk Highway in Amagansett.

Joanne Pahwul, the town's planning director, brought the proposal to the board's attention in May. Last Thursday, Catherine Casey, the housing authority's executive director, asked members to schedule a discussion about rezoning to create the overlay district, so that the project might move forward.

Details of the proposed complex are still in the preplanning stages, but Ms. Casey told the board that "the concept for this property would be somewhat similar" to Gansett Meadow: one, two, and three-bedroom apartments at varying rent levels based on income, "to create as many fully accessible units as possible" Ñ accessible to those with disabilities or other mobility issues.

The development would include multiple buildings with several apartments in each, she said, accessed from Three Mile Harbor Road and situated "so you only see one or two at a time," with just one visible from the road.

A concept plan and community input would inform the number of apartments to be constructed, board members said, and a review under the State Environmental Quality Review Act would follow.

A zoning change would be necessary, subject to a public hearing before it could be enacted. Councilman Jeff Bragman suggested two hearings "in the age of Covid," when the board's meetings take place via video conference, with the public able to call in and be connected with board members. "The more you get the community engaged, the better it is," he said. "It's better to know early what the reaction is."

"It sounds like the board is ready to schedule a public hearing," said Supervisor Peter Van Scoyoc.