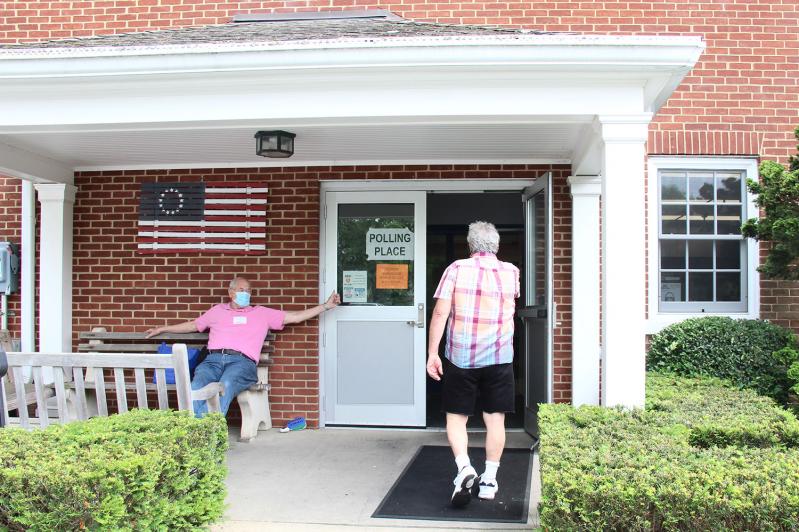 Tuesday’s Democratic primary election was unlike any in memory: Instead of a result before midnight, voters will likely wait weeks to know who will challenge Representative Lee Zeldin in New York’s First Congressional District and Assemblyman Anthony Palumbo in the State Senate’s First District.

An official at the Suffolk County Board of Elections said yesterday that, while around 150,000 voters received absentee ballots, the board is expecting between 70,000 and 90,000 to be returned. Either figure dwarfs the 14,596 votes in the board’s unofficial count of in-person votes for congressional candidates.

Due to the coronavirus pandemic, Gov. Andrew M. Cuomo issued an executive order in April allowing New Yorkers to vote by absentee ballot in the primary election. A subsequent order extended the deadline to submit absentee ballots until Tuesday.

As of yesterday, and with all election districts reporting an unofficial count of in-person votes, the board of elections had Perry Gershon, the Democrats’ 2018 nominee who lost to Mr. Zeldin by four percentage points, leading with 5,166 votes, or 35.39 percent. Close behind was Nancy Goroff, who is on leave from her position as chairwoman of Stony Brook University’s chemistry department, with 5,002 votes, or 34.27 percent. County Legislator Bridget Fleming, a former Southampton Town Councilwoman and prosecutor in the Manhattan District Attorney’s office who entered the race later and raised less money than Mr. Gershon and Ms. Goroff, had captured 4,062 votes, or 27.83 percent. A fourth candidate, Gregory-John Fischer, a business strategist, was far behind with 2.21 percent.

In a text message yesterday, Mr. Gershon said that “I am optimistic that my lead after in-person results will continue to build momentum when absentee ballots are counted. I knew from the 11 town halls I have held since last September, including the last five that were held virtually, that my message of fighting for Long Island’s interests instead of Washington insiders was resonating. My support comes from all parts of the district, which will be a key to victory in November.”

During the campaign, Mr. Gershon noted that many elected officials lost their first contest only to prevail in the next election. Mr. Zeldin is one example: He lost a challenge to former Representative Tim Bishop in 2008 before defeating him in 2014. He has successfully defended the seat twice since that election.

Jacob Sarkozi, Ms. Goroff’s campaign manager, said yesterday that “We are very encouraged by the record turnout yesterday and by mail, and tremendously grateful to the thousands of voters and supporters who cast their ballots demanding a representative who will work to improve people’s lives and make public policy based on facts and reality. The enthusiasm that fueled the primary’s unprecedented turnout will carry over into November, when we will flip NY-01. Moreover, having spent weeks encouraging our supporters to vote by mail, our data have us confident that Nancy will be the Democratic nominee to beat Lee Zeldin in the fall.”

Ms. Fleming also took to Facebook on Tuesday at 9 p.m. “Polls are closed!” she wrote. “Thank you to everyone that voted, all our volunteers, and our amazing campaign team. We couldn’t have come this far without you. We’ll be back as soon as we have results!”

In the race to succeed State Senator Kenneth P. LaValle, who is retiring, Laura Ahearn, a Port Jefferson attorney and executive director of the Crime Victims Center, was in the lead in an unofficial count of in-person votes with 2,360 votes, or just over 31 percent. Brookhaven Town Councilwoman Valerie Cartwright was close behind with 2,120 votes, or 27.88 percent. Southampton Town Councilman Tommy John Schiavoni was in third place with 1,812 votes, or 23.83 percent. Skyler Johnson, a political science student at Suffolk Community College, had received 945 votes, or 12.43 percent, and Nora Higgins, a nurse and the regional coordinator of the Public Employees Federation, had 356 votes, or 4.68 percent.

Candidates held online events with supporters on Tuesday night. During Ms. Fleming’s video conference event, former East Hampton Town Supervisor Judith Hope spoke to what she said was the urgency of the Nov. 3 general election. “I am well aware a life of public service has become exceedingly difficult,” she said in remarks directed to Ms. Fleming. “It is challenging and even ugly, but it has never, ever been more important in my lifetime. I do feel our country is in a very perilous and very fragile situation at this moment in time, and we need all the good people we can get in the United States Congress. Right now, the only thing that stands between us and the abyss is the House of Representatives.”

All of the Democratic candidates for New York’s First Congressional District have sharply criticized Mr. Zeldin, a close ally of President Trump. “Lee Zeldin has forgotten about us in his search for Donald Trump’s adoration,” Ms. Fleming told supporters via video conference at around 11 p.m. on Tuesday. The congressman, she said, “cares more about the president’s high regard than he does about our health care.” Mr. Zeldin, she said, “only cares about a constituency of one and it lives on Pennsylvania Avenue,” a reference to the White House, “not anywhere on Montauk Highway or Route 112.”