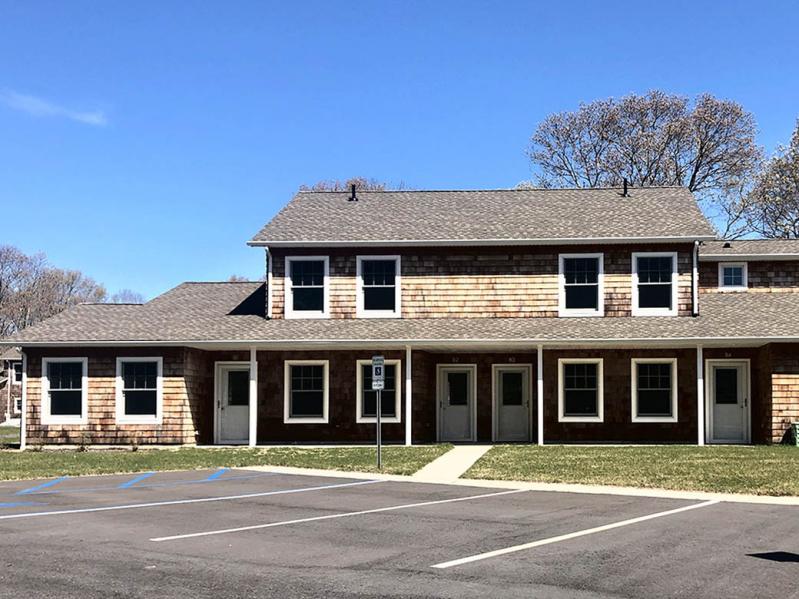 After a delay of several months, buyers may soon be able to close on and occupy the “manor house” condominium apartments in East Hampton.
Christine Sampson
By Christopher Walsh

The long wait that buyers of the 12 “manor house” condominium units on Accabonac Road in East Hampton have experienced because of the discovery of elevated levels of volatile organic compounds in the units’ cellars may be nearing an end, but the director of East Hampton Town’s Office of Housing and Community Development is taking a cautious approach to the contractor’s assertion that the issue has been resolved.

The three-building complex represents the town’s first ownership opportunity among its efforts to provide affordable housing. The one, two, and three-bedroom units are offered to qualified residents at below-market rates, ranging from $126,835 to $267,850. Residents on a waiting list maintained by the town were contacted based on the results of a May 2017 lottery, in which 331 names were randomly assigned a number and listed in the order in which their number was drawn.

At a Dec. 6, 2019, ribbon-cutting ceremony, town officials said that some buyers might occupy their units by year’s end. But last fall, one buyer’s appraiser noticed an odor in some units’ basements. People’s United Bank, which had hired the appraiser, required that the air be tested before closing. Tests revealed levels of ethyl acetate above the federal Environmental Protection Agency’s residential regional screening levels in 11 of the units (one test malfunctioned). Elevated levels of other volatile organic compounds, or VOCs, were found in some basements. Buyers were notified in a Jan. 23 email.

Ethyl acetate is a solvent used in products including paint and nail varnish removers. It is naturally present in many organisms, but overexposure can cause irritation of the eyes, nose, and throat, and at very high concentrations it can have severe health impacts.

The basements were heated, in some cases to 85 degrees, in an effort to “cook off” the VOCs and chemicals, and then ventilated as weather allowed, a process that lasted more than one month. The basements were tested again, the results again revealing levels of ethyl acetate in excess of the E.P.A.’s recommended guidelines. Those results were shared with buyers in March.

Officials in the Office of Housing and Community Development maintain that off-gassing of the basements’ foam insulation, or the paint that coats it, is the likely cause of the compromised air quality, though the paint’s manufacturer insisted that ethyl acetate is not used in its product.

The contractor, JNS Contracting of Wading River, hired Air Quality Insights, a Brookhaven environmental services company, to conduct another round of tests. In an April 23 letter to JNS Contracting, Chris Ciervo of Air Quality Insights stated that “the air quality within the unit locations . . . is acceptable for most individuals to occupy these spaces,” with the exception of one two-bedroom apartment, which still had air quality he deemed “marginal,” allowing that “some effect on the occupants is possible.”

Mr. Ciervo cited the U.S. Green Building Council’s “healthy building” recommendation for total VOC levels in indoor air, an aggregate of all emitted gases within a target area, below 500 nanograms per liter. Air in the two-bedroom apartment’s cellar was found to have 1,000 nanograms per liter.

Last Thursday, the town board passed a resolution directing the town attorney to “take any and all actions necessary to compel the contractor” and/or its bonding company to “take appropriate remedial actions to bring the manor house condominium units into compliance with acceptable air quality standards, so that such units may be transferred to, and safely occupied by, the purchasers” and their families.

A letter from Air Quality Insights dated last Thursday, the same day the resolution was passed, informed JNS Contracting that a subsequent test of the unit that had demonstrated “marginal” air quality now measured just 360 nanograms per liter, well within the range considered normal and “acceptable for most individuals” to occupy.

Tom Ruhle, the director of the Office of Housing and Community Development, said on Monday that he had yet to closely examine Air Quality Insights’ report of last Thursday. “I have no reason to believe it’s not true,” he said of the lower VOC measurement, but pointed to the timing of the town board’s resolution and the report deeming the unit’s air quality normal and acceptable. It is also “an open question,” he said, “as to whether it’s going to satisfy banks and other parties. We’re looking at that.”

“Our pre-eminent goal is for these units to be safe and to close, both as soon as possible,” Mr. Ruhle said. “We are trying to move ahead, but we’re balancing those two things — and operating within a pandemic.”

East Hampton Samples Are a Crucial Contributor to Lyme Test
Ready to Adopt a Pet? ARF Is Ready, Too
Guild Hall's Curator Visiting Studios Virtually Through June
Seeking Stories and Images From the Time of Covid
END_OF_DOCUMENT_TOKEN_TO_BE_REPLACED