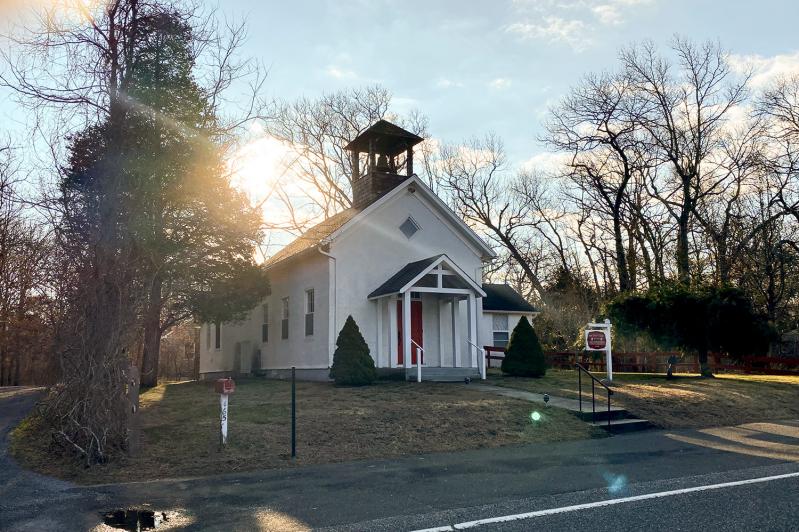 AT&T has proposed building a cell tower disguised as a bell tower at St. Peter’s Chapel in Springs. Above, the chapel as it now looks, and below, a rendering of what it would look like with the bell tower.
Jamie Bufalino
By Jamie Bufalino

A proposal from AT&T to build a 50-foot-high freestanding “campanile” to house cellphone antennas, at St. Peter’s Chapel on Old Stone Highway in Springs, took a big step forward on Feb. 26, when the East Hampton Town Planning Board determined the project would not have a negative impact on the environment.

In 2015, AT&T sought to add a cell tower to the roof of the chapel by disguising it as a steeple. The planning and architectural review boards did not approve that plan. The A.R.B. recommended the company pursue the design it is now proposing, a campanile, or bell tower.

Since then, AT&T has explored alternative sites for the tower, including  the Springs School, the Blue Bay Girl Scouts Camp on Flaggy Hole Road, and the market at the corner of Old Stone Highway and Neck Path, said Mr. Fitzgerald. The existing structures at the latter spot made it unsuitable for a tower, he said, and the other two sites are too far away to remedy the coverage gap.

In July, the planning board asked the company to determine whether a 50-foot pole could be built in a wooded area of the property, rather than right behind the chapel. Mr. Fitzgerald said last week that would not be feasible: “The surrounding trees are simply too high and too close.” The facility would not broadcast effectively, he said.

AT&T will also need variances from the zoning board of appeals, including a special permit to build near freshwater wetlands, and relief from fall zone setbacks. According to the town code, “No habitable building or outdoor space where people congregate” can be within two times the height of a cell tower. Properties to the north and east are within that distance, and the church itself would be just three feet away.

The zoning board had suggested that AT&T build a pole in the wooded area, and suggested increasing its height to 70 feet to prevent cell transmissions from being blocked by the trees, Mr. Fitzgerald told the planning board. An AT&T consultant deemed that option ill-advised for aesthetic reasons, he said. “He concluded that the campanile was a better fit for the community, and would be the least intrusive means of remedying the gap in coverage.”

A straw poll taken at a recent Z.B.A. hearing indicated that the board will approve the variances, but members must await the planning board’s environmental assessment before they can make an official determination.

According to the State Department of Environmental Conservation, when determining the environmental impact of an application, governmental boards may factor in aesthetic concerns, and the historical nature of the subject property.

St. Peter’s Chapel is a mission chapel of St. Luke’s Episcopal Church in East Hampton Village. It dates to 1881 and has a Civil War-era bell in its bell tower, according to the Village Preservation Society. “This is not an insignificant historic property,” said Kathy Cunningham, a planning board member who is also the executive director of the preservation society.

“I would submit that just based on the historic importance of the property there would be a significant adverse impact,” agreed Randy Parsons, Ms. Cunningham’s colleague on the board.

The structure, however, has not been officially designated a local, state, or national historic site, as Mr. Fitzgerald pointed out. “We’re not talking capital-H historic,” he said. He also noted that Lys Marigold, a historian of St. Luke’s Church, had said at the Z.B.A. public hearing on the proposal that several earlier additions had been made to the chapel. The tower would be a benefit to the church, said Ms. Marigold, because the money the church would receive from renting its land to AT&T could be used to develop more community programs.

The town code encourages the use of existing church steeples for wireless facilities. That section of the code, Mr. Parsons declared, is being exploited by an “unholy alliance” of cell companies and religious institutions. “Churches are having a hard time financially and they’re susceptible to wanting the revenue from the lease,” he said.

Mr. Parsons also had safety concerns about radio frequency emissions from the campanile. The Federal Communications Commissions sets the acceptable level for such emissions, and AT&T has submitted documents showing that the proposed antennas would meet those standards. “Because the facility complies with all F.C.C. requirements, the planning board, as a matter of federal law, is preempted from considering the health effect associated with it,” said Mr. Fitzgerald.

“That doesn’t reassure me, but I understand the legality,” replied Mr. Parsons, who said the board should undertake a more detailed study of the project’s environmental impacts. He was outvoted 4 to 1. Ms. Cunningham abstained, and Ed Krug recused himself.

Mr. Parsons said the board did not have the expertise to determine whether the data AT&T was presenting — everything from the details of its coverage gap to the unsuitability of alternative sites — was accurate. “Thus far, this town has not provided expert advice for its planning board, so we are being asked to rely on your assessment of all these issues. I think we should have our own experts reviewing what you submitted and advising us.”

Samuel Kramer, the chairman, agreed. “The board needs specific guidance with respect to the technical aspects of this application and every other cell application,” he said. “We’ve been flying by the seat of our pants.”

Later in the meeting, a public hearing was held on an application from Verizon to build a nearly 7-foot-tall enclosure for a wireless facility on top of the Montauk Community Church. No one spoke out against the proposal.