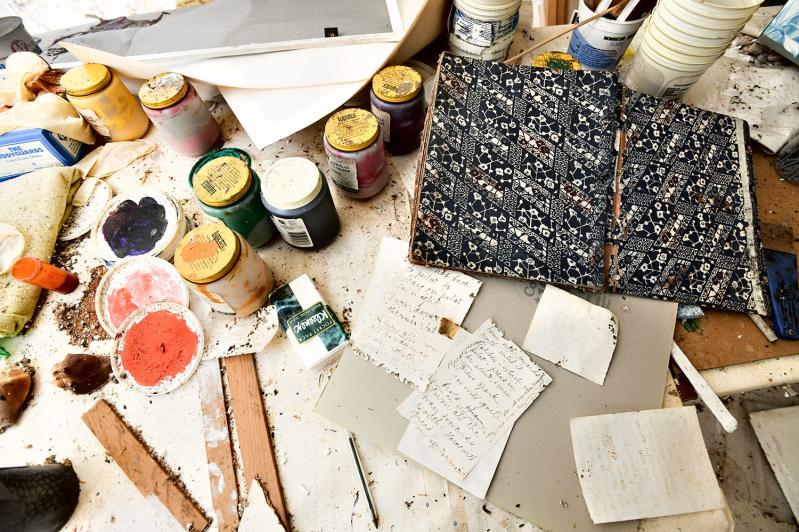 When East Hampton Town first acquired the Springs property that belonged to the artists James Brooks and Charlotte Park, a studio there looked as if the artists had just stepped away.
Doug Kuntz
By Christopher Walsh

The National Trust for Historic Preservation has asked the East Hampton Town Board to halt the planned demolition of the Springs house and studios of the Abstract Expressionist artists James Brooks and Charlotte Park.

In a letter read to the board by Robert Strada, the executive director of Peconic Historic Preservation, Katherine Malone-France, the trust’s chief preservation officer, asked that the town “work with interested parties to develop a revised plan for the long-term future of this nationally significant site.”

Brooks and Park, who were married, were an important part of the midcentury artists community here. Ms. Malone-France stated that the national trust considers their property “an exceptional example of an environment that reflects the artists’ domestic and creative lives and contributes to the Town of East Hampton’s larger history of being an artists’ enclave.” Brooks died in 1992 and Park in 2010.

The town bought their 11-acre property on Neck Path for $1.1 million in 2013, initially as open space and a link to nearby trails, using the community preservation fund. After it was determined that the house and studios had remained unchanged since the artists’ deaths, residents formed the Brooks Park Heritage Project and lobbied for preserving the buildings as a community arts space. The structures were designated a town historic landmark in 2014.

In 2017, the town entered into an agreement with Peconic Historic Preservation to allow use of the property by a not-for-profit after the town rehabilitated the buildings. Last year, however, the town’s property management committee recommended instead that the buildings be demolished, citing their poor condition, and the board voted in November to authorize the Department of Land Acquisition and Management to seek bids for the demolition. (The Pollock-Krasner House and Study Center, also in Springs, has offered to relocate one structure, a shed that functioned as the couple’s guest house, to its own site, on Springs-Fireplace Road.)

Ms. Malone-France wrote that demolition “would be contrary to the purpose of the Town of East Hampton’s local preservation ordinance, which states, ‘The protection, enhancement, and perpetuation of landmarks and historic districts is necessary to promote the economic, cultural, educational, and general welfare of the public.’ ”

“Given the property’s historic significance and cultural importance to understanding East Hampton’s heritage,” she continued, the Trust urges the town “to work with interested parties to develop a sustainable long-term plan for the rehabilitation and management of the Brooks Park historic landmark.”

Mr. Strada told the town board that Peconic Historic Preservation “is indeed one of those ‘interested parties.’ ”

Supervisor Peter Van Scoyoc replied that the board was acting on the property management committee’s recommendation. The structures, he said, are badly deteriorated, “and without some support of a viable plan for managing going forward, and with no movement in terms of progress, the property sits, after seven years, as an attractive nuisance and causes great potential liability for the town.”

Nonetheless, said the supervisor, “If there is a path forward, I personally am all ears.” . . . “If the National Historic Trust wants to get involved and put the weight of the Trust behind this effort, and if there are other individuals who want to come forward and help out, we would certainly embrace that.” The town is willing to help, he said, but “if there isn’t the backing and support within the community and organizations beyond, then it becomes much more difficult for us to preserve these buildings.”

Mr. Strada said he would meet with Paul Edmondson, president and chief executive officer of the National Trust, as early as this week, and report back to the board.