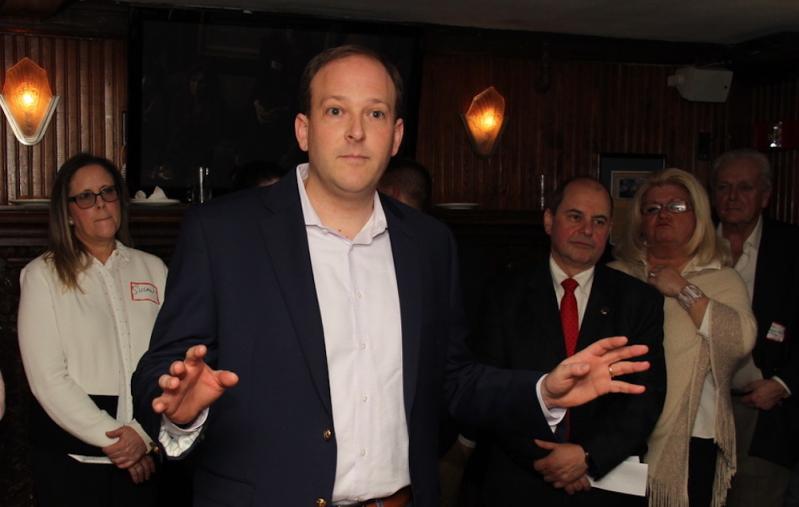 Representative Lee Zeldin of New York’s First Congressional District was among 168 members of the House of Representatives, all but two of them Republicans, who asked the Supreme Court last Thursday to consider overturning landmark rulings establishing a woman’s right to an abortion.

The House members, along with 39 Republican senators, signed a “friend of the court” brief in a case regarding a Louisiana law restricting access to abortion, which the court is expected to hear in the spring and rule on in June. In it, they cite “the unworkability of the ‘right to abortion’ found in Roe v. Wade,” the 1973 ruling establishing the right to an abortion, “and the need for the Court to again take up the issue of whether Roe and Casey” — the latter a reference to a 1992 ruling that upheld the right established by Roe v. Wade — “should be reconsidered and, if appropriate, overruled.”

Advocates of women’s reproductive rights are worried that the conservative justices appointed by President Trump, Neil Gorsuch and Brett Kavanaugh, have tipped the court’s balance toward overturning Roe v. Wade.

Supporters of women’s reproductive rights, including candidates seeking to challenge Mr. Zeldin in the Nov. 3 election, were quick to criticize the congressman, who was first elected in 2014. “We are not surprised Congressman Zeldin signed on to this amicus brief,” said Vincent Russell, president and chief executive officer of Planned Parenthood Hudson Peconic. “He has a long history of opposing access to reproductive health care for the people of Suffolk County. This is another tactic by anti-reproductive health politicians to impose their views, when nearly 7 out of 10 Americans support Roe v. Wade. Abortion care is safe and legal, and we will continue our work to keep it that way.”

Suffolk County Legislator Bridget Fleming, who in November announced her intention to seek the Democratic Party’s nomination to challenge Mr. Zeldin, said yesterday that the congressman’s signature on the friend of the court brief “is a reflection of how out of touch Mr. Zeldin has become with the district. This is a very extreme position. Roe is a longstanding, hard-fought-for landmark of American jurisprudence that protects the basic rights of women to make decisions about their own reproductive health care, and to determine what happens with their own bodies.”

Perry Gershon, the 2018 Democratic Party nominee who lost to Mr. Zeldin by four percentage points and is again seeking his party’s nomination to challenge him this year, referred to Mr. Zeldin’s participation in the friend of the court brief in a fund-raising email sent on Friday. “Lee Zeldin is drawing a line in the sand,” wrote Mr. Gershon, who lives in East Hampton. “He wants to take reproductive choice away from every woman in America. . . . We need to show Zeldin that he is wrong! The vast majority of Americans, including Long Islanders, believe every woman should have reproductive choices that are safe and legal. Lee Zeldin should not have signed onto this amicus brief and we need to make him pay.”

This is not the first time Mr. Gershon has criticized Mr. Zeldin on the abortion issue. In the closing days of the 2018 campaign, his campaign mailed a flier depicting a clothes hanger with the message “Lee Zeldin’s plan for women’s healthcare.” The flier called Mr. Zeldin “an anti-choice zealot who wants to see Roe v. Wade overturned,” and said that he “voted to let insurance companies refuse to cover basic preventive care for women,” and voted to block funding for Planned Parenthood.

In response, Mr. Zeldin called the flier “the most disgusting mail piece I have ever seen in any campaign I have ever been a part of.”

Nancy Goroff, who is also seeking the Democratic Party’s nomination to challenge Mr. Zeldin, said in a statement to The Star yesterday that “Zeldin’s move isn’t a surprise after he voted against Planned Parenthood over 30 times last year. It’s time our district had a representative to stand up for us and our right to make our own medical decisions.”

Ms. Goroff, who is on a leave of absence from her position as professor and chairwoman of Stony Brook University’s chemistry department, noted that Emily’s List, a political action committee that works to elect pro-choice Democratic female candidates to office, has endorsed her campaign. “They support me because they know that I’ll work hard to debunk the lies from the far right that have been used to restrict reproductive choice,” she said. “At a moment when our courts are stacked with Trump appointees, we need proud pro-choice leaders in Congress who will fight back with legislation to protect our reproductive health.”