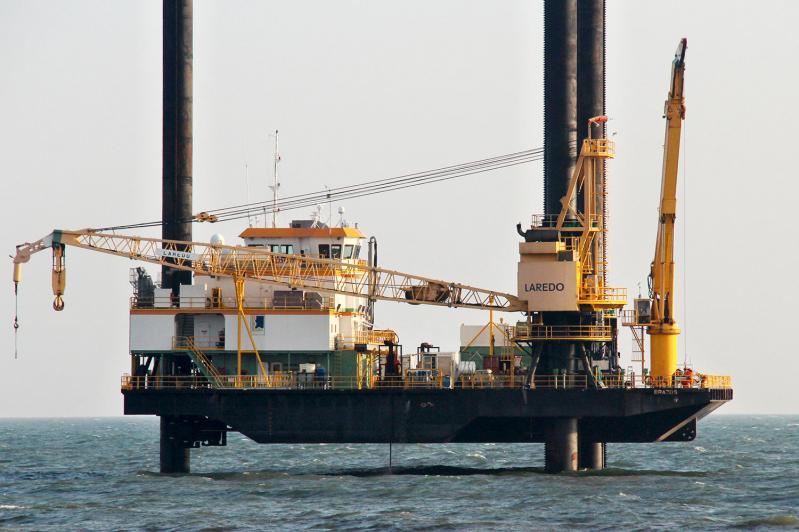 The large lift boat that conducted geotechnical survey work off the ocean beach at the end of Beach Lane in Wainscott last month returned to complete that work late last week.
Durell Godfrey
By Christopher Walsh

An agreement that would see the Town of East Hampton reap an almost $29 million payment from the developers of the South Fork Wind farm in exchange for allowing a 138-kilovolt cable to be buried under town highway rights of way, from Beach Lane in Wainscott to the Long Island Power Authority substation in East Hampton, was unveiled this week.

The agreement, still in draft form, furthers the town board's and trustees' negotiations with Orsted U.S Offshore Wind and Eversource Energy, which are jointly developing the 15-turbine project some 35 miles off Montauk. It would only take effect, however, if the proposed installation wins the approval of multiple federal, state, and other permitting entities, which are reviewing the proposal.

Before voting to grant the easement and lease, the town board will dedicate a work session to public comment on the documents, on Jan. 12, with written comments being accepted now and through that date. "We want to engage with the public and have the public have an opportunity to have a good long look at these documents before we act on them," said Supervisor Peter Van Scoyoc.

The New York State Public Service Commission recently concluded hearings on the portion of the installation that would lie in state waters and on land, with a decision on issuing a certificate of "environmental compatibility and public need" expected in the first quarter of 2021. The federal Bureau of Ocean Energy Management, which also has to approve the wind farm, has delayed its review, which is expected to postpone operations to 2023, a year later than expected.

The town board unveiled broad outlines of the agreement in September. It includes two initial "milestone" payments of $500,000 each. The first, nonrefundable payment is to be made within 90 days of the agreement's taking effect; the second, within 90 days of the start of construction. Within six months of the start of operations, the developers are to make 25 annual payments, starting at $870,000 and increasing by 2 percent annually.

Combined with a $100,000 geotechnical access/license fee already paid to the town, the price tag is approximately $28.9 million.

Last week the developers returned the Laredo Brazos, a barge that can stand out of the water, to the ocean at the end of Beach Lane, in order to complete geotechnical surveys that began last month but were not completed due to weather conditions.

The agreement also calls for the developers to hire an intermediary who will liaise with the town's commercial fishermen for the duration of the wind farm's operation. It also calls for their turbine maintenance contractor to establish a support facility and transfer vessel base in Montauk, provided a suitable location and required permits for such a facility can be obtained. Orsted U.S. Offshore Wind and Eversource Energy will be required to pay town property taxes on its onshore infrastructure, an expected additional $4 million over the life of the project.

The easement along the town's rights of way is conditioned on the export cable being installed, maintained, repaired, and ultimately decommissioned in accordance with the protection and preservation of natural and historical resources, and the assurance that the public's safety and quality of life will be safeguarded during installation and operation.

"We are pleased to reach agreement with the Town of East Hampton on the terms of easements for South Fork Wind's transmission cable route from Wainscott Beach," said Meaghan Wims, a spokeswoman for the developers. "Our agreement includes approximately $29 million in payments to the town, and extensive conditions we've developed together to minimize impacts to the community and the environment from this project. We look forward to the public's review of these documents and to the town board's vote on conveyance of the easements."

On Monday, the town trustees also considered calling a special meeting to discuss the agreement and easement with the public. Informally, they spoke of possible environmental remediation projects that might be financed by the benefits package, including dredging Napeague Harbor to improve water flow, in hopes of the harbor's supporting eelgrass beds and scallops, and a similar effort in Lake Montauk, though those waters are not under trustee jurisdiction.

"I think the best legacy we could leave as a board would be to step away after 25 years and have a healthy bottomland in Montauk, in East Hampton, on Napeague, in Northwest, that we don't have in a lot of places now, at least not reliably," said Trustee Jim Grimes.

The export cable, whose siting is a topic of intense criticism among many Wainscott residents, is to be buried 30 feet beneath the beach. Residents of the hamlet have cited the potential disruption and duration of its installation as well as its possible exposure in the surf, as happened off Block Island, where the first offshore wind farm in the country, the five-turbine Block Island Wind Farm, is in operation. A number of those residents have formed Citizens for the Preservation of Wainscott, which is petitioning to incorporate the hamlet as a village.

On Tuesday, at least one resident gave his full-throated support for the wind farm and the export cable's landing site. Michael Hansen, calling in to the town board's virtual work session, told the board that "your leadership has been crucial to this. Leadership from the trustees," who have jurisdiction over the beach in question, "has been equally important."

"We are in a climate crisis," Mr. Hansen said in advocating for the wind farm's renewable, emission-free electricity. "It is a five-alarm fire. East Hampton Town and Wainscott are on the front lines, and we need to do our part. Doing our part is supporting this modest wind farm project."