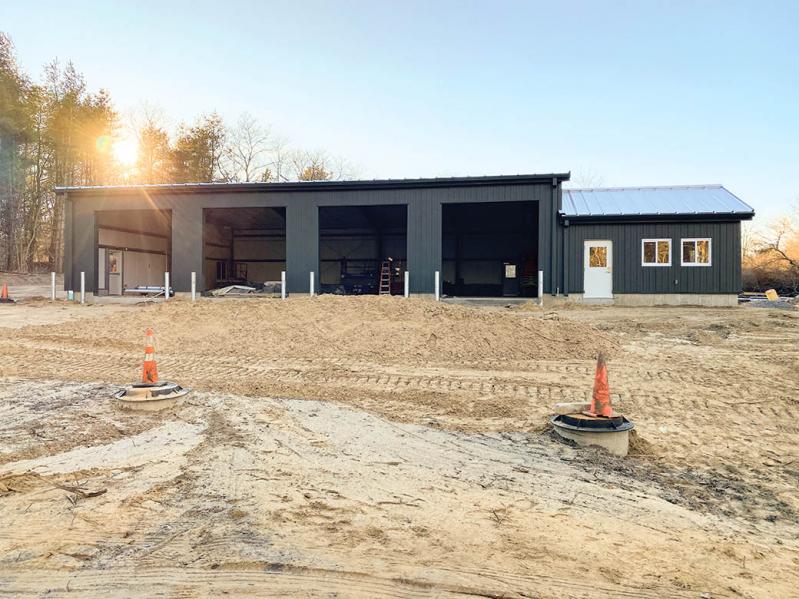 A tower at an East Hampton Fire Department substation under construction near Bull Path and Old Northwest Road would hold not only emergency communications equipment but panel antennas and remote radio heads that could boost cellphone service in the area.
Jamie Bufalino
By Jamie Bufalino

The East Hampton Town Planning Board agreed to fast-track a proposal from AT&T to build a 185-foot-tall cell tower on land adjacent to an East Hampton Fire Department substation under construction in Northwest Woods, and inched closer to scheduling a public hearing of an application to build a car wash next to the East Hampton Town Recycling Center on Springs-Fireplace Road, at a meeting on Jan. 8.

The proposed cell tower would have 12 panel antennas and 15 remote radio heads plus associated equipment between the 155-to-160-foot mark, and the space above would hold the town’s emergency communications equipment. It would be sited on a 264-square-foot concrete slab within a 2,500-square-foot fenced area between Bull Path and Old Northwest Road.

The application, said Kimberly Nason, a lawyer for the telecommunications company, is the result of a legal settlement between East Hampton Town and AT&T, which had sued after the planning board in 2017 denied its application to install antenna panels on an existing wind turbine at Iacono Farm on Long Lane in East Hampton.

“In the settlement agreement, the town acknowledges that AT&T has a gap in coverage . . . and the town has the obligation to allow AT&T to remedy that gap,” she said. “There’s virtually no coverage in the area of this site, and this is a genuine safety concern.” The tower would provide improved coverage in the vicinity of Old Northwest Road, Stephen Hand’s Path, Hand’s Creek Road, Two Holes of Water Road, and Cedar Street, she said.

The settlement also called for an expedited review process from the planning, zoning, and architectural review boards, said Ms. Nason. Approvals from each must be granted by Feb. 18, 60 days after the application was filed. If permission is not granted by that date, AT&T will be able to pursue its earlier plan to install the equipment at Iacono Farm.

According to Eric Schantz, a senior planner, the proposed tower would be well concealed in a wooded area “deep within the interior of the site.” Variances from the zoning board of appeals are needed, however, because the tower would not meet the “fall zone” setback from two nearby residences and the fire substation. Town code says that “no habitable building or outdoor space where people congregate” can be within two times the height of a cell tower.

A 160-foot-tall tower, which is all AT&T would need for its equipment, would have been safely outside the required fall zone setback, said Ms. Nason, “but the town wants to use the pole as part of its upgrade of the emergency communications systems, and asked for the pole to be 185 feet tall.”

Kathy Cunningham, the board’s vice chairwoman, said the proposed site for the tower, a former brush dump, was a far better location than Iacono Farm. “I think this is the best case scenario we could ask for,” she said. Since the site is in a water recharge overlay district, she asked that a rim be added to the concrete slab, so that any substances that spill would be less likely to reach the ground. Ms. Nason said she would ask AT&T to make that adjustment.

A public hearing on the matter will be held at the board’s Feb. 5 meeting.

In other business at last week’s meeting, Greg Darvin, the owner of property adjacent to the East Hampton Recycling Center, returned to the board with his plans to build a nearly 5,500-square-foot car wash with parking on an acre of land between Maryland Avenue and Ohio Avenue, the entrance and exit roads to the dump.

The business would be at the rear of the parcel and screened from Springs-Fireplace Road by a proposed 50-foot-wide scenic easement. The site plan was recently amended to also provide a 10-foot setback between the car wash and the easement.

A traffic study commissioned by the applicant found that traffic flow in the area would not be severely impacted by the business.

At a meeting in August, the main sticking point for the board was the potential environmental impacts, particularly on groundwater. Because the way the car wash operates is proprietary information, the board has not received details about the chemicals that will be used for cleaning.

Britton Bistrian, a land use consultant who has represented the applicant before the board, had said the business would obtain permits from the New York State Department of Environmental Conservation and the Suffolk County Health Department, and those agencies would ensure that no discharge to the groundwater occurred.

After the last meeting, Mr. Schantz said the Planning Department had reached out to Kim Shaw, the town’s environmental protection director, who confirmed that the way the business operates is under the purview of the Health Department. She also noted, he said, that the state requires all car washes to use “closed systems,” ones that recycle water rather than discharging it.

“I spoke with her [Ms. Shaw] at length and I wish there was something more that we could do, but it’s not in our purview,” Ms. Cunningham said.

Water that drips off freshly washed cars, however, would be released into the environment, so Ms. Cunningham asked the applicant to add a dry well with a filter to the site.

Although the meeting was a work session, Samuel Kramer, the chairman, allowed Robert Pine and Phyllis Italiano, both Springs residents, and Carl Irace, a lawyer for Citizens to Preserve the East End, to voice opposition to the application.

Both Mr. Pine and Mr. Irace said that in 1998 the town board had passed a resolution that said Maryland Avenue should be reserved for access to the dump.

They interpreted that to mean no other business should be allowed to use the access road. Mr. Schantz, however, said that he had previously discussed that resolution with John Jilnicki, the former lawyer for the planning board who is now the town attorney, and Mr. Jilnicki had said that the resolution does not state that the road is “only” for the dump.

“If it was the intention to reserve it solely for the dump, it would have said so,” said Mr. Kramer.

Nevertheless, the board decided to seek more clarity on the access road question, and whether the car wash would negatively impact the environment and traffic flow prior to scheduling a public hearing.