Extra hours via an app; revenue eyed for sewer system 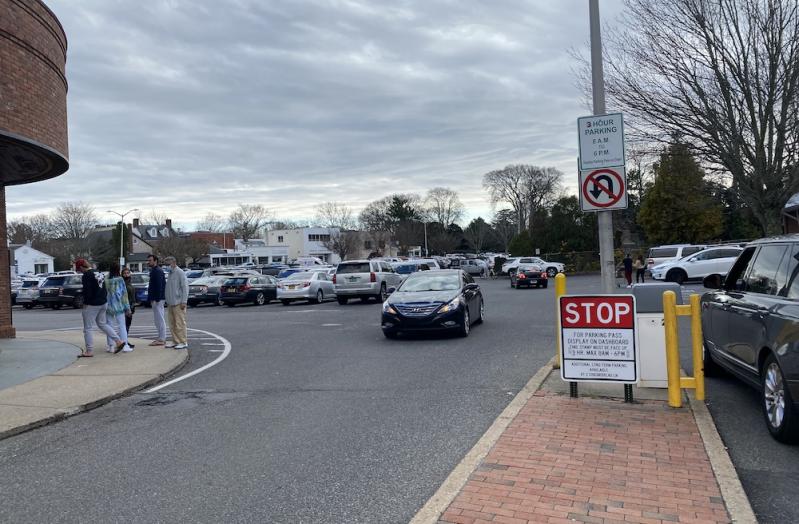 A smartphone app could be used to pay for up to four hours beyond the two free hours allowed in the Reutershan and Schenck parking lots or the one free hour allowed in parking spaces on Newtown Lane and Main Street.
Jamie Bufalino
By Jamie Bufalino

The East Hampton Village Board approved large increases in the cost of several permit fees, and discussed a plan to charge for additional hours of parking in the commercial district at a meeting on Friday.

A proposal to "amend" the permit fees was on the meeting's agenda, and the board passed it in a unanimous vote without discussion. After the vote, Rose Brown, a trustee, asked Mayor Jerry Larsen, "Did we want to discuss what those permit fees are, and the increases just for the public's sake? . . . Maybe, Mayor, you'd like to inform everyone of the changes?"

After Mr. Larsen demurred, June Lester, the deputy clerk, provided the details. The fee to receive a demolition permit from the Building Department will be raised from $100 to $1,000, and a certificate of occupancy from $100 to $150. The cost to apply to the planning board for a subdivision lot line modification will increase from $1,000 to $2,000. The $750 cost to request a variance from the zoning board of appeals will be raised to $1,000 for one requested prior to construction, and $2,000 for one requested after. The fee for an awning permit from the design review board will increase from $25 to $150, and for a miscellaneous permit such as the installation of solar panels the fee ranges from $25 to $200 for work that has yet to be done, and to $400 for work that has been completed prior to receiving approval.

The decision to raise the fees, Mr. Larsen said, was made during a recent staff meeting he had had with the village's clerk, treasurer, department heads, and attorney.

In March, while campaigning for mayor, Mr. Larsen had recommended the village charge for additional hours of parking in the commercial district, and use the revenue to finance the installation of a centralized sewer system. Drivers could pay for the extra time via a smartphone app, he said. At Friday's meeting, Lex Blum, a regional sales manager for ParkMobile, a company that provides an app-based payment service, gave a presentation on his firm's system.

With 21 million users, ParkMobile is the largest mobile payment provider in the country, Mr. Blum said. To create an account, a user must download the app, and enter an email address, a method of payment, a car's license plate number, and the state of registration. Up to five cars can be registered per account. Those who don't have a smartphone or prefer not to use an app, can set up an account and pay via a 1-800 phone number.

In the village, the service would be used to pay for up to four hours beyond the two free hours allowed in the Reutershan and Schenck parking lots or the one free hour allowed in parking spaces on Newtown Lane and Main Street, said Police Capt. Anthony Long. Each parking area will be classified as a different zone. The amount the village plans to charge per hour was not discussed.

The app uses GPS coordinates to identify the car's location, and the amount of time allowed. It notifies users of the time remaining, and allows them to add more time when they're running late. Mayor Larsen said the app can also be used to manage daily parking passes at the village beaches. The system will be compatible with the mobile system the Police Department will soon be using to enforce parking regulations, said Mr. Blum.

There is no upfront cost to the village, Mr. Larsen said. ParkMobile will receive 30 cents per transaction, and the village will keep the rest.

"I'm pretty excited about this," said Mr. Larsen. "I've been talking about paid parking for as long as I can remember because it's going to really help the businesses, and it's going to help us pay for providing the services that we need." He told Sag Harbor Village Mayor Kathleen Mulcahy and Southampton Village Mayor Jesse Warren about the village's plan to use the system, he said, and they are eager to use it as well. The three villages plan to launch their apps around the same time, he said.

Also on Friday, the board approved a $23,125 emergency repair of the Fire Department's ladder truck, which Fire Chief Gerard Turza Jr. described at the Nov. 5 meeting as the department's "most critical piece of equipment."

A $74,768 purchase of two Chevy Tahoes for the Police Department was also approved, as was a nearly $1.79 million payment for this fiscal year's contribution to the village's retirement programs for employees and members of the Police and Fire Departments.

The board resolved to ratify a collective bargaining agreement with the Public Safety Dispatchers Association, and agreed to allow the mayor to execute the agreement on behalf of the village.

Jack Patricof, a village resident, was appointed director of the Mayor's Youth Council, an organization Mr. Larsen has started to encourage civic involvement among young people and to provide community service and other opportunities for them.

The village is seeking bidders for the five-year lease of the Main Beach concession, with the bid opening to be held at 2 p.m. on Dec. 29.

The installation of a Little Free Library on the village's nature trail was approved for one year, and a public hearing was scheduled for Dec. 18 on a proposal to discontinue the requirement to display parking receipts while parking in the Reutershan and Schenck parking lots.