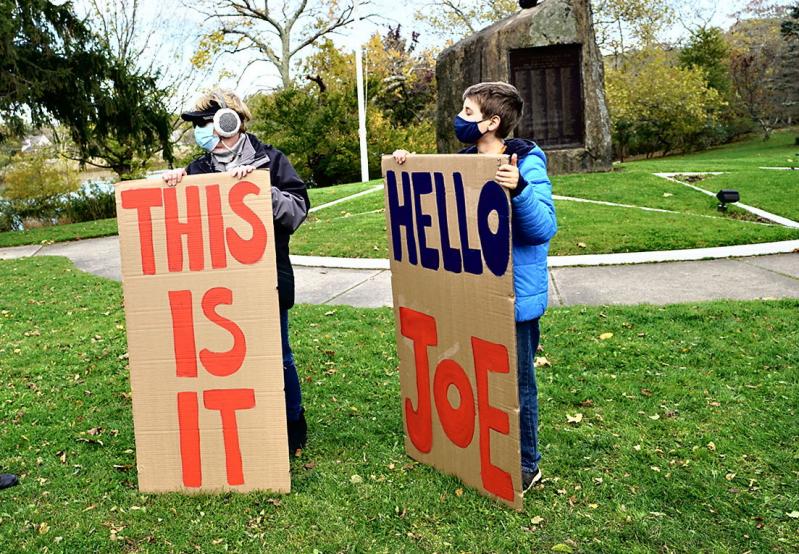 On Election Day in Sag Harbor two people made their choice for president clear.
Doug Kuntz
By Christopher Walsh

Reaction on the South Fork was muted, at least publicly, when the Associated Press and major news networks announced on Saturday that former Vice President Joe Biden had won the presidential election, voters having rejected the norm-shattering reign of President Trump after one term.

While the president had refused to concede the election as of yesterday, residents reacted to a new administration and the changes in store, here and in the country at large.

"I think the number of first-day executive orders that Joe Biden is talking about are consequential for us, particularly on climate change," said Cate Rogers, chairwoman of the East Hampton Democratic Committee. "Addressing our vulnerability to climate change is huge."

She was relieved that the Trump administration would not be able "to continue its assault on the Affordable Care Act," and said, "we're also impacted by reassuring and reinstating the DREAM Act," which would grant temporary conditional residence and a path to permanent residence to qualifying immigrants who entered the United States as minors, "so that children who came here can stay here, as my ancestors were allowed to do. Those alone are very consequential for our year-round population."

Minerva Perez, executive director of the nonpartisan Organizacion Latino-Americana of Long Island, or OLA, spoke of the Trump practice of "demonizing immigrants, even those seeking safety, fleeing violence, fleeing gangs, and what have you. And our prior administration had no qualms separating children from their families . . . which is arguably a crime against humanity." Ms. Perez also pointed to the coronavirus pandemic, which she said the Trump administration had not taken seriously enough.

"At least on those three accounts, I can say that what we will expect and hope for from this new administration is the opposite of all the things I just mentioned. That will help our community, and not just the Latino members of our community but all of our community."

Others echoed Ms. Rogers's thoughts on climate change. Lena Tabori, chairwoman of East Hampton's energy sustainability advisory committee, predicted that President-elect Biden would reverse the more than 100 environmental regulations that Mr. Trump rolled back, including returning the United States to the 2015 Paris climate agreement. "But keep in mind that the federal courts will be less supportive to him now after more than 200 judges friendly to Trump's fossil fuel interests have been appointed — including at the Supreme Court."

Mr. Biden, she said, "will absolutely move to expand support for renewables, to put policies in place that shift our energy from fossil fuels to electricity and accelerate the mix of renewables into our electricity. I don't believe for a moment that he is going to halt gas and oil overnight, but I believe he is going to put policies into place which make that inevitable over the next 30 years."

Once the federal Bureau of Ocean Energy Management "is no longer under the control of the White House," she said, "we will also have the opportunity to provide offshore wind energy — clean, renewable energy — to New York State."

Gordian Raacke, executive director of Renewable Energy Long Island, agreed that "We are witnessing an exciting shift in direction and it comes not a moment too soon. The new administration is expected to put climate change back on the front burner and has committed to address the climate crisis by building a 21st-century clean energy economy." The incoming administration's plan to create a carbon-free power sector by 2035, he said, "will help East Hampton and other communities reach our ambitious local goals."

Andy Stern, a managing partner of YorkBridge Wealth Partners, a Bridgehampton financial planning firm, said his clients are hoping for "a return to normalcy, that they can get back to work, and that the broad economy experiences a period of growth and job creation." Changes to the tax code are hard to predict, he said, "but our view is that the president-elect will not want to impose changes that would be construed as punitive and damaging to the growth prospects of the broad economy."

In the short term, Mr. Stern said, "everyone is concerned about a peaceful and orderly transfer of power. Given the president's posturing over the last week, we expect this will be a drawn-out affair that ultimately leads to a change in administrations. For sure, anything that disrupts the traditional norms around this could impact the markets, but we would view any disruption as a limited event and not one that would have lasting negative implications on the economy as a whole."

Some residents were noncommittal with respect to the election result. Paul Monte, president of the Montauk Chamber of Commerce and a member of East Hampton Town's Business Recovery Group, did not say that he questioned whether Mr. Biden had been fairly elected, but did say that "If there are true irregularities in the voting, they should be investigated." As to the future, "We know what we've had for the past four years, but the question is what will we get."

Mr. Biden could help the town's businesses if the H-1B visa program for foreign workers resumes, he said, but "a lot of times politicians don't follow through."

Manny Vilar, chairman of the East Hampton Town Republican Committee, had a more definitive take on the election's integrity than Mr. Monte. "It's clear at this point there is systemic and pervasive fraud," he said. "There's no doubt in my mind at this point. The question is, what are the legal remedies available?"

While the state's election boards — outside of New York City ("a hot mess," he said) — afford little opportunity for widespread fraud, he pointed to President Trump's election night lead in states including Pennsylvania, Georgia, and Arizona, all of which evaporated as absentee ballots were counted. "I believe, in the end, Donald Trump will prevail."

As founding president of the Police Benevolent Association of New York State, "I'm always concerned that there will be a further push to defund our police departments."

Assemblyman Fred W. Thiele Jr., who was apparently re-elected last week, had a different point of view. Of President Trump, he said, "You would hope that there would be some rationality and statesmanship, but based on what I've seen over the past few days, I don't have high hopes." The president, he said, is "genetically incapable of conceding," but "the election results are clear, and President-elect Biden will take office on Jan. 20." Still, "it's going to be a rocky transition, and a difficult period over the next two months."

Diana Weir, a former Republican member of the East Hampton Town Board who serves on the Suffolk County Hispanic American Advisory Board and as Southampton Town's director of housing and community development, said Mr. Biden "probably won, but the media is not the one that calls the elections. They can make a prediction, let's put it that way." As for the future, "We want to see good fiscal policies, good foreign policy, we want to have a good safety net for people who need it," she said. "That's not going away."

Americans "are a generous, kind people," Ms. Weir said, and "when the election's over, you have to take all the crap that's filling the airwaves and put it aside and say let's work together. I'm very much of that mind."

With Reporting by Jamie Bufalino and Christine Sampson