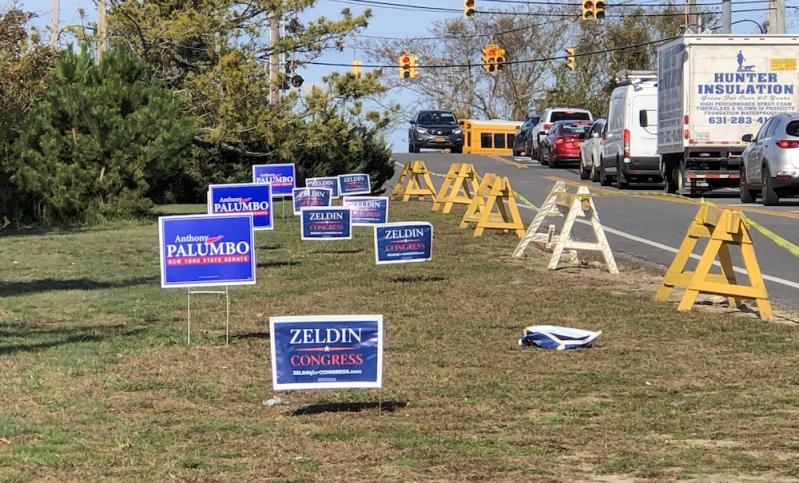 Though Representative Lee Zeldin has a commanding lead in his re-election campaign in New York's First Congressional District, Nancy Goroff, his Democratic Party challenger, has yet to concede, telling supporters on Sunday that the contest is far from over.

Statistics provided by the Suffolk County Board of Elections on Tuesday showed 88,130 absentee ballots returned from the First Congressional District. Of those, 39,879 are from registered Democrats, 21,859 are from unaffiliated voters, 21,146 are from Republicans, 3,462 are from Independence Party voters, and 1,323 are from Conservative Party voters. Fewer than 200 ballots each were returned from voters aligned with minor parties.

Those numbers were likely to grow on Tuesday, which was the deadline for receipt of absentee ballots, as more than 21,000 remained outstanding as of that day.

The breakdown of absentee ballots by party affiliation suggests that a win by Ms. Goroff is unlikely. Mr. Zeldin, a Republican seeking a fourth term in Congress and one of President Trump's most ardent supporters there, claimed victory in the late hours of Nov. 3, Election Day. The board of elections has the incumbent unofficially leading Ms. Goroff, who is on leave from her position as chairwoman of Stony Brook University's chemistry department, by 176,323 votes to 111,203 votes, or 61.3 percent to 38.1 percent.

But "at this point in the race for NY-01, we know that there are over 82,000 ballots left to be counted, and we owe it to each voter to count every ballot," Ms. Goroff said in an email on Sunday. "This can take a while: We do not expect the Suffolk Board of Elections to begin counting absentee ballots until November 16, and they may not start with our race."

Manny Vilar, chairman of the East Hampton Town Republican Committee, noted Mr. Zeldin's rating as the 12th most bipartisan member of Congress by the Lugar Center, founded by former Senator Richard Lugar. That, he said, "means this is someone that works as well with the Democrats as they do with the Republicans, and strikes a nice middle chord, which is everything we say we want." Mr. Zeldin, he said, "has delivered time and time and time again. Long Islanders in the district knew that."

In the race in State Senate District 1, Assemblyman Anthony Palumbo leads his challenger, Laura Ahearn, 74,293 votes to 55,557 votes, or 57.2 percent to 42.8 percent, according to the board of elections' unofficial tally. But 42,087 absentee ballots had been received at the board of elections as of Tuesday, with 19,136 of them from registered Democrats versus 9,904 from Republicans. Another 10,425 were from unaffiliated voters, and 1,837 more came from Independence Party voters. Fewer than 800 more came from voters registered with a minor party.

The candidates are vying to succeed Senator Kenneth P. LaValle, who is retiring.

"I feel quite good," Mr. Palumbo, running on the Republican and Conservative Party tickets, said yesterday. "We certainly don't want to jump to conclusions until the absentee ballots are counted, but I'm hoping they break in the same fashion as the early votes."

We're waiting for every ballot to be counted," Ms. Ahearn, his Democratic and Protect the Taxpayer Party challenger, said on Monday. "We're looking forward to a final result so we can move forward to achieve our goals for [Senate District 1] and New York State."

"We've seen across the nation how the mail-in ballots have favored Democrats," she said, "so we believe we are in striking distance."

Assemblyman Fred W. Thiele Jr., the Democratic and Independence Party candidate, claimed victory in his re-election contest in Assembly District 1. "With deep gratitude, I am so honored that voters in the 1st Assembly District have entrusted me to continue to represent their values," he wrote on Twitter Monday. "I will continue to fight for everything that my district deserves."

The unofficial count had Mr. Thiele leading Heather Collins, his Republican and Conservative Party opponent, by 28,187 votes to 24,666 votes, or 53.3 percent to 46.7 percent. The board of elections had received 17,615 absentee ballots from the district as of Tuesday, 8,407 from registered Democrats, 4,788 from Republicans, 4,328 from unaffiliated voters, and 787 from Independence Party voters. Around 250 more had been returned from voters registered with minor parties. Efforts to reach Ms. Collins were unsuccessful.

"I am thrilled to congratulate Fred Thiele on his continued advocacy for the East End and all the good he does," said Cate Rogers, chairwoman of the East Hampton Democratic Committee. "I'm disappointed in the other races, and would have thought Nancy Goroff would have done better, considering her base in Brookhaven. This is how it is today, you really don't have an idea until the day comes and the votes are counted."

Suffolk voters overwhelmingly rejected a ballot proposal that would change the term of office in the County Legislature from two to four years. The unofficial count has 361,353 voting no to 150,812 in favor, or 70.55 percent to 29.45 percent.

The verdict on a second proposal, which would transfer excess funds in the county's sewer assessment stabilization reserve fund to the taxpayer trust fund and eliminate the requirement that interfund transfers be made from the general fund to the sewer assessment stabilization fund, is still unknown, pending the absentee ballot tally. The board of elections' unofficial count has 270,473 voters in favor versus 232,067 opposed, or 53.8 percent to 46.2 percent.