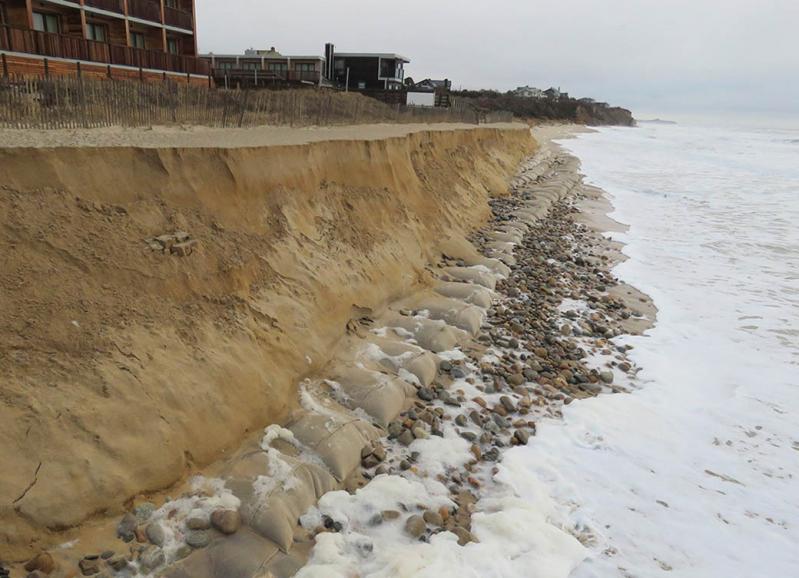 The eroding ocean shoreline in downtown Montauk, seen here on Tuesday, has led to controversial measures to protect it, as the erosion poses a threat the hamlet’s tourism-driven economy.
Jane Bimson
By Christopher Walsh

Manifestations of climate change multiplied in 2019, with record air and water temperatures, wildfires, and floods occurring in multiple regions around the globe.

Worse, the year ended with a disappointing United Nations climate change conference in Madrid, a forum aimed at assessing progress since the 2015 Paris Agreement to reduce global greenhouse gas emissions and put its goals into effect. At its conclusion, no consensus on scaled-up efforts to cut global greenhouse gas emissions had been reached.     “The international community lost an important opportunity to show increased ambition on mitigation, adaptation, and finance to tackle the climate crisis,” U.N. Secretary General Antonio Guterres said.

But 2019 may also be remembered as the year that a movement to meet the challenges of a warming world reached critical mass, and manifestations of that phenomenon, as well as those of the climate crisis itself, were apparent on the South Fork.

In January 2019, all five members of the East Hampton Town Board and Suffolk County Legislator Bridget Fleming attended a discussion of community choice aggregation, a model that replaces the utility as the default supplier of electricity. Under that model, municipalities can join together and leverage pooled demand to negotiate a fixed-rate and potentially lower price of electricity from private suppliers. It also allows municipalities to choose locally based renewable energy options, such as solar, demand response, and microgrid projects, in their electricity supply.

The town has yet to pass enabling legislation, and the Long Island Power Authority would also have to adopt the rules and regulations of the New York State Public Service Commission’s 2016 order authorizing a framework for community choice aggregation, but two forums on the subject were held at Town Hall in September. In February, the Southampton Town Board voted to enable a C.C.A. program, and in August it authorized Supervisor Jay Schneiderman to execute a contract with Joule Assets, a Katonah, N.Y., energy company, to serve as the program’s administrator.

A sign of a maturing domestic offshore wind industry came in February, when Eversource, New England’s largest energy company, acquired a 50-percent interest in the proposed South Fork Wind Farm as well as a second project known as Revolution Wind and the 257-square-mile federal lease area off the coasts of Massachusetts and Rhode Island in which they are to be situated. The Danish energy company Orsted had acquired all three assets late in 2018 as part of its acquisition of the Rhode Island company Deepwater Wind.

In March, 14 East Hampton High School students were among more than 1.5 million around the world who walked out of class to call leaders to action on climate change. Each, directly or otherwise, was inspired by Greta Thunberg, a 16-year-old in Sweden whose lone act of dissent, a “school strike for climate” outside her country’s parliament building, ignited a worldwide movement demanding immediate action to sharply reduce the fossil-fuel emissions that are blamed for climate change.

In May, around 45 people gathered outside Southampton Town Hall, where members of the group Drawdown East End and others urged the adoption of policies outlined in “Drawdown: The Most Comprehensive Plan Ever Proposed to Reverse Global Warming,” commonly referred to as Project Drawdown. A week later, on June 1, East Hampton’s first Eco Fair was held on the grounds of Town Hall.

A growing divide between neighbors and generations was laid bare in June at an information forum and public statement hearing on the South Fork Wind Farm hosted by the Public Service Commission. Many residents of Wainscott, while professing a belief in renewable energy, had already stepped up an effort to prevent the wind farm’s export cable from making landfall in their hamlet, while another group, Win With Wind, was formed to “produce fact-based information regarding the benefits of renewable offshore wind energy,” according to its mission statement.

At the hearing, Frank Dalene, a former chairman of the town’s energy sustainability and resiliency advisory committee and a member of the Wainscott Citizens Advisory Committee, called out those of his neighbors who, he said, claim to support offshore wind but oppose the cable landing in their hamlet. The C.A.C., he said, “fully supported offshore wind up to the day it was announced the cable might land on Beach Lane. I called out the Nimbyism.”

“There rose up charlatans, purveyors of false information, and fearmongers,” Mr. Dalene continued. “You have heard and will hear from their opposition in Wainscott opposing the cable landing on Beach Lane. . . . The height of hypocrisy is astounding.”

Offshore wind took a big step forward in July, when Gov. Andrew M. Cuomo announced that Sunrise Wind, an Or­sted/Eversource venture, and Empire Wind, proposed by the Norwegian company Equinor, had each been awarded a contract to develop offshore wind farms that will jointly generate 1,700 megawatts of electricity, sufficient to power more than one million residences. The Sunrise Wind farm is to send the electricity it generates to Long Island. The announcement came as the governor signed the Climate Leadership and Community Protection Act, which sets the state’s goals of 70 percent of electricity derived from renewable sources by 2030 and 100-percent carbon-free electricity by 2040.

Also in July, David Wallace-Wells gave a sobering talk about climate change at BookHampton in East Hampton. His book, “The Uninhabitable Earth: Life After Warming,” is an alarming warning about the catastrophic conditions scientists predict absent dramatic and timely cuts in greenhouse gas emissions.

A hopeful sign appeared in August with a Hamptons Institute panel discussion called “The Youth Climate Movement Could Save the Planet” at Guild Hall in East Hampton. Generational solidarity is essential to addressing the climate emergency civilization faces, according to panelists including Alexandria Villaseñor, a 14-year-old New Yorker who as of Aug. 5 had held a “climate strike” outside the United Nations headquarters for 34 consecutive weeks.

But August also saw the federal Department of the Interior’s Bureau of Ocean Energy Management inform project officials for Vineyard Wind, an 84-turbine installation proposed to be located 15 miles south of Martha’s Vineyard, that it was not prepared to issue the final environmental impact statement for the 800-megawatt project, and would extend its review.

Several South Fork residents traveled to Manhattan in September to participate in the Youth Climate Summit, held three days before the opening of the U.N. General Assembly. Ms. Thunberg addressed many of her peers under a blazing sun at Battery Park. “Why should we study for a future that is being taken away from us, that is being stolen for profit?” she asked the throng. “Some people say we should study to become climate scientists or politicians so that we can, in the future, solve the climate crisis. But by then it will be too late. We need to do this now!”

The town board and the town’s Natural Resources Department celebrated the operation of the first megawatt-scale solar power plant on the South Fork in October. The Accabonac Solar plant, comprising 3,456 individual 320-watt solar panels across two acres, produces 1.6 million kilowatt hours annually, a figure that Supervisor Peter Van Scoyoc said is equivalent to more than half the annual electricity usage of municipal buildings.

The year drew to a close with a major disappointment for baymen and lovers of bay scallops, a die-off of between 90 and 100 percent in areas throughout the Peconic Estuary. At a symposium last month at the Stony Brook Southampton campus, Christopher Gobler of Stony Brook University’s School of Marine and Atmospheric Sciences referred to the “four horsemen of the ocean climate change apocalypse” — warming water temperatures, ocean acidification, hypoxia, and harmful algal blooms.

As temperatures go up, the oxygen content of the ocean goes down, Dr. Gobler said. As the oceans absorb more and more of the carbon dioxide emissions from electricity generation, transportation, and heating, they become more and more acidic. “This has important consequences for any calcifying animal like the scallop,” he said.

The fate of the bay scallop could be a proverbial canary in the coal mine, a sign of things to come. “We are in a deep hole, and we are still digging,” Mr. Guterres said at the opening of the U.N.’s climate change conference last month. “Soon it will be too deep to escape.”