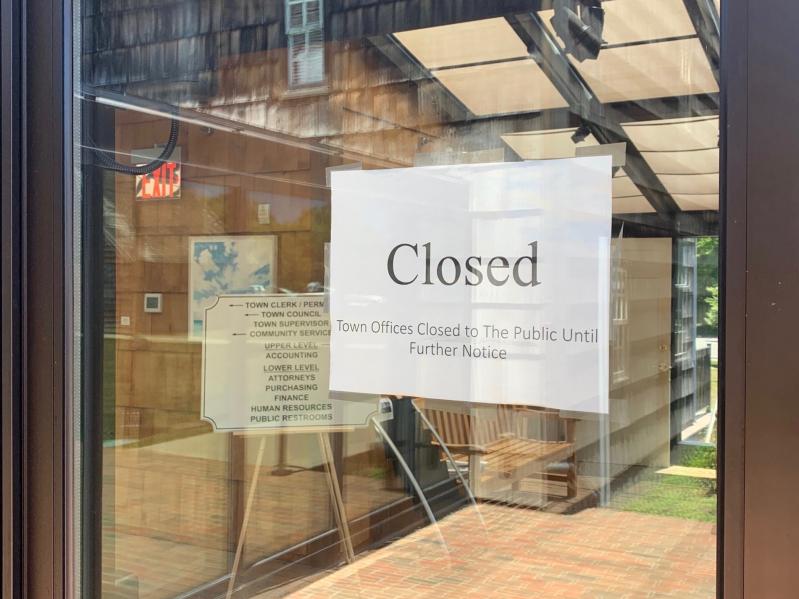 East Hampton Town Supervisor Peter Van Scoyoc released the town's tentative 2021 budget on Sept. 30, an $82.68 million plan that would see a spending increase of around $700,000, or .86 percent, over last year's budget and a tax levy that stays below the state-mandated tax cap by about $9,000.

The Covid-19 pandemic looms over the proposed budget and accompanying message from the supervisor, who referred last month and again on Tuesday to non-tax revenue shortfalls based on permit fees such as nonresident beach parking, which was suspended this year in order to prevent crowding. During a discussion with the board on Tuesday, Len Bernard, the town's budget officer, said some fees are projected downward for 2021. "Justice Court fees have taken a real hit" -- a $350,000 reduction in the tentative budget, he said -- because ordinance enforcement officers are "doing things that don't lend themselves to handing out tickets," having diverted their efforts to Covid-19-related safety measures.

The 2021 budget must also account for a 50-percent cut in "public safety" funds, contributed by Suffolk County and collected through county sales taxes, for local law enforcement support. The loss, of around $500,000, must be made up with tax revenue and/or fund surplus. That should be possible, Mr. Van Scoyoc indicated, thanks to the town's ample fund surpluses and recently reaffirmed triple-A credit rating from Moody's Investors Service, which, he said, "puts the town in a better position to absorb such a dramatic unexpected reduction in county assistance."

The tentative budget uses around 6 percent of the projected $46.5 million 2020 year-end surplus, or $2.79 million, to pay for projected Covid-19-related expenses, make up for the loss of the police support funds, and mitigate tax impacts on residents. That allocation, Mr. Van Scoyoc wrote, "is more than acceptable in that overall surplus percentage will remain over 50 percent, to be reserved for future emergencies and/or other one-time large expenses or capital projects."

As an example, a statement accompanying the proposed budget said that owners of a house within a village, valued at $1.2 million, would see a $7.77 decrease in their tax bill, while those with a similarly valued house outside a village could expect an increase of $50.19.

The disparity, Mr. Bernard explained on Tuesday, relates to the $500,000 shortfall from the county. "We don't use county police -- they save by us having our own police department -- but they do send $1 million they raise through sales tax" to offset that expense. "The weight of that falls on people that live outside a village. They're the ones that fund the [East Hampton] Town Police Department. If you live in a village, you have your own police department."

The tentative budget allocates approximately $530,000 to add four new full-time positions -- an ordinance inspector, an environmental analyst, an information technology specialist, and a harbormaster -- and to recognize outstanding performance and increased responsibilities for a number of town employees. These include 21 job upgrades on the salary scale, nine merit increases, three title changes, seven promotions, and four raises.

An additional $15,000 is budgeted for the town's senior citizen nutrition program, "to meet the demand that is anticipated due to the Covid-19 pandemic," according to the supervisor's message. Staffing adjustments have also been incorporated into the tentative budget to address pandemic-related cleaning and maintenance of town facilities. About $100,000 is added for staffing in the Buildings and Grounds Department, primarily to handle Covid-related activities, and almost $10,000 is added in designated supply lines to purchase items needed for Covid protocols and safety.

The 2021 budget will also see the last payment on deficit financing related to budget mismanagement between 2005 and 2008. The final principal and interest payments related to the borrowing of $21.2 million in 2010 are scheduled to be made in March. Mr. Bernard and Charlene Kagel, the town's chief financial auditor, who is leaving that position for one with Southampton Village, "worked very hard over the last decade to right this ship," Mr. Van Scoyoc said Tuesday.

Virtually no changes were proposed to the tentative budget during Tuesday's discussion. Councilman Jeff Bragman, however, requested a $1,200 stipend increase for the town's housing authority, "given the importance of the work they do, and a good track record." His colleagues agreed.

He asked that any additional modifications to the proposed budget be brought to his attention by Tuesday, when the board next meets. A notice will be placed in The Star's Oct. 22 issue for a Nov. 5 public hearing, he said, with a vote on the budget's adoption slated for Nov. 19. By law, the final budget must be adopted by Nov. 20.