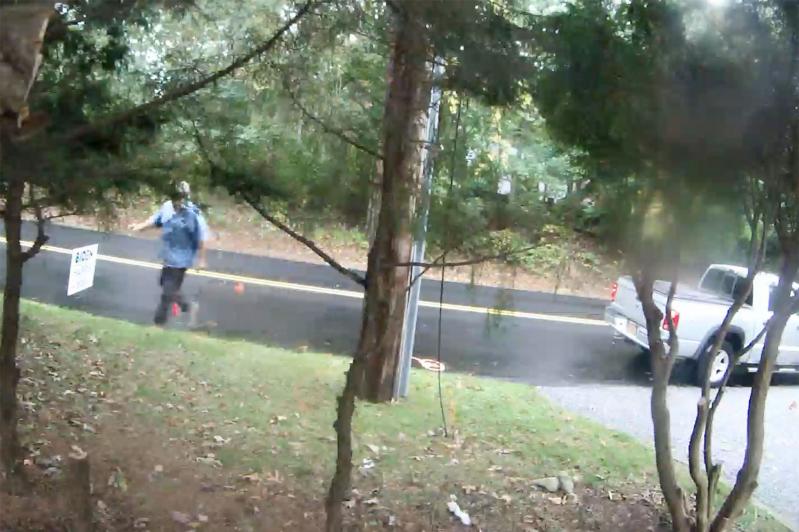 A verbal altercation stemmed from a man's attempt to remove political signs, above, from a residential property on Town Lane.
By Christine Sampson

An altercation between a Town Lane resident and a man attempting to take her lawn signs that was caught on video on Friday provides an apt jumping off point for a look at the rules governing political signs.

In the Town Lane incident, the man, who had just removed the signs from the grass near the street, can be heard saying "it's not stealing. . . . This is town property. You're not allowed to have the signs. . . . This is advertising without a permit."

He told the woman he had been paid by "the Republican Party" to remove the signs, one of which was in support of Joe Biden, the Democratic candidate for president, and the other in support of the Black Lives Matter movement.

"Excuse me, all lives matter," the man says on the video, which was provided to The Star after it was captured on a surveillance camera. "You're separating the country," the man tells the resident during the heated argument.

He ultimately returned the signs, but she took down the license plate of his silver pickup truck and filed a police report. The East Hampton Town Police Department has not formally released any details because the incident, considered harassment, is still under investigation, according to Detective Sgt. Daniel Toia.

"We've had this happen just about every election season," Detective Sergeant Toia said on Monday. "It's not uncommon. We've had it happen on both sides."

Elsewhere in this week's East Hampton Town Police logs, on Oct. 11, a North Cape Lane resident filed a police report because his two political signs were stolen overnight. The signs, valued at $15 each, were in support of Biden and Nancy Goroff, a Congressional candidate.

When signs are outright stolen, "we treat it like larceny. . . . It's typically a misdemeanor, depending on the value of the property," Detective Sergeant Toia said.

Whether political signs can legally be placed on public property is often a point of confusion for people.

Political signs are considered constitutionally-protected free speech, even when they are on public property. East Hampton considers them "off-premises temporary signs."

And the official town code here says the following: "Off-premises temporary signs which do not exceed six square feet in area are permitted, provided that they are installed on private property with the permission of the property owner or upon public property, provided such signs do not interfere with the use of such property and do not cause a traffic hazard as determined by the town superintendent of highways or the town police department. Such signs may be erected for no more than seven days and shall be removed by the persons responsible for their installation. In the event such signs are not removed within seven days of their placement, they shall be deemed litter and may be removed by the town, and in addition, appropriate penalties for littering may be imposed."

However, by practice, because of the free speech element, town officials do not enforce the seven-day rule for temporary political signs so long as they are removed after the corresponding election. In fact, the New York State Department of State has published a legal memo that says that if such regulations are challenged in court, they "are likely to be struck down by the courts as an unlawful interference with the right of free expression as guaranteed by the First Amendment to the United States Constitution."

East Hampton's town code also says: "No permit shall be required for off-premises temporary signs as provided for herein."

Which means the Town Lane resident was indeed entitled to display her signs.

And as for the man's claims in the video that, "The Republicans pay me," Manny Vilar, chairman of the East Hampton Town Republican Committee, denied that was the case. "To say I'm flabbergasted is probably an understatement," he said by phone this week. "It was unequivocally, absolutely, positively not East Hampton, not Suffolk County, not New York State."

Mr. Vilar said signs on his party's side -- those in support of Congressman Lee Zeldin, a Republican who is running for re-election against Ms. Goroff, and signs in support of President Donald Trump's re-election campaign -- are being stolen at a clip of 20 per night. He also said some of the large banners touting Mr. Zeldin have been vandalized or destroyed, though no recent police reports have been filed.

"The reality is nobody should be stealing anybody's signs," Mr. Vilar said. "Thank God we have differences of opinions and different beliefs, because after the campaigning is over, when we work together, it always makes for better government. Anyone that would try and limit anybody's freedom of expression and mitigate their political opinion is doing a disservice to both our community and our country."