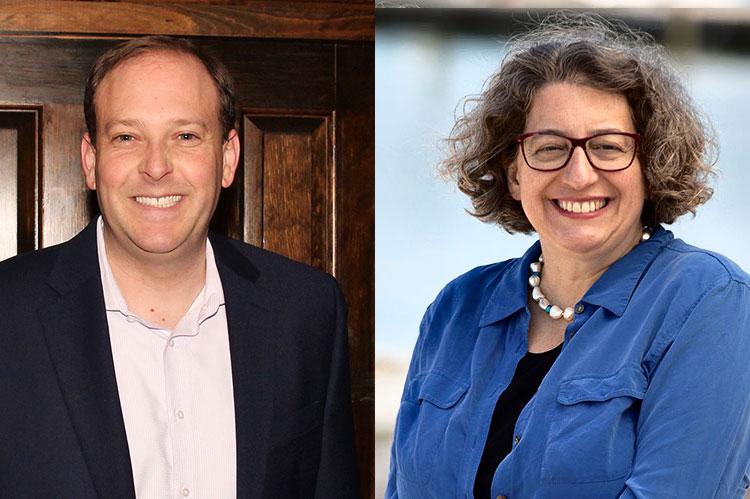 Representative Lee Zeldin and his Democratic challenger, Nancy Goroff, clashed in a 90-minute debate on Monday, each accusing the other of lying about their records and demanding they remove negative campaign advertisements.

Ms. Goroff, who is on leave from her position as chairwoman of Stony Brook University's chemistry department, repeatedly assailed the Trump administration's handling of the Covid-19 pandemic while attempting to tie Mr. Zeldin, one of the president's most ardent supporters, to that record. "Unfortunately," she said, the congressman "has called his response 'phenomenal.' "

Mr. Zeldin, who made scant reference to the president, took credit for multiple initiatives in New York's First Congressional District, including the supply of personal protective equipment from the federal government and the federal Department of Energy's selection of Brookhaven National Laboratory to house its Electron-Ion Collider project. "I've done more to advance science this year than my opponent has in her lifetime," he said, citing the $2 billion project.

Science was a recurring theme to the debate, Ms. Goroff repeatedly drawing a contrast between herself and the president. She envisioned a government in which "policy decisions are based on facts and reality" and voiced frustration and fury at "politicians' willingness to ignore facts and evidence on issue after issue -- climate change to health care to gun safety, on and on."

The pandemic was the first topic raised by the debate's moderator, Cathy Peacock of the League of Women Voters of the Hamptons, Shelter Island, and the North Fork. Asked about the 220,000 Americans lost to the novel coronavirus and surging cases in many states, Mr. Zeldin deflected blame to China while citing "all levels of government working together" to address the pandemic. He said that his calls to federal officials had resulted in the P.P.E. and ventilators getting to the state and the district.

"Congressman Zeldin tells a nice story," Ms. Goroff responded, "but unfortunately it just doesn't match the facts or answer the question." It is "infuriating," she said, that "the wealthiest country in the world has suffered the most deaths, the most cases, and is farther behind every other developed country in the world. And we know it's because of an irresponsible president and his reckless and incompetent response to this pandemic. . . . By the time those masks came here, it was much too late."

The Trump administration, she noted, had slashed staff at a public health agency inside China "who were there, placed by the Obama administration, to be early on the ground, and also ignored warnings from so many health experts across the globe." The president knew in January "that this was going to be very bad," she said, citing recorded interviews with the journalist Bob Woodward, "yet he misled us" and refuses to "send clear public health messages. We need real leaders who are going to look at facts, science, and follow through. We need personal protective equipment across the country, not just when a congressman gets on the phone and says we're desperate."

Mr. Zeldin, echoing the president's law-and-order campaign theme, accused his challenger of being soft on crime. "My opponent called police dangerous," he said, and refuses to "condemn rioting, looting, and violence against police." The average person, he said, "wants to see stronger support for law enforcement, and not dangerous anti-police policies and rhetoric."

Ms. Goroff said that Mr. Zeldin is "spreading lies about my positions," and she denied that she supports defunding police. But the country has to address "issues of systemic racism" as manifested in murders of African-Americans at the hands of police officers. Government should "look at how to do things better" and "fund social services sufficiently," such as shelter for the homeless and addiction treatment, "so we are not asking police to solve problems at the end of a 911 call that are long-term problems that need real solutions."

On climate change, Ms. Goroff said "the science is absolutely clear" and that "we must take vigorous, ambitious, sustained action" to achieve carbon neutrality. She pledged to lead on the issue, serve as a resource for all members of Congress, "and hold their feet to the fire to make sure we take meaningful action" on climate change, which she said "is long term the biggest risk we face to our way of life" in the district.

Mr. Zeldin pointed to his membership in the bipartisan Climate Solutions Caucus and his co-sponsorship of the Carbon Capture Improvement Act, which would incentivize industrial plants to invest in carbon dioxide capture and storage but has not become law. He cited his involvement in multiple environmental measures unrelated to climate change, including perfluorinated chemical contamination and the conservation of Long Island Sound and Plum Island.

Ms. Goroff pounced, asserting that Mr. Zeldin "never actually answered whether he believes" in anthropogenic climate change and attacking the president for withdrawing the United States from the Paris Agreement on climate change. Mr. Zeldin answered that his membership in the Climate Solutions Caucus should have made his position clear, that climate change is "real" and "important to address."

To a question about America's role and perception around the world, Mr. Zeldin called China the country's largest geopolitical threat. He complimented the Trump administration's role in brokering diplomatic pacts between Israel and both the United Arab Emirates and Bahrain, the move of the United States embassy in Israel to Jerusalem, and its recognition of the Golan Heights as part of Israel. "This administration has done a fantastic job," he said, and the president was right to withdraw the United States from the Iran nuclear deal, as it had "tons of flaws in it."

Ms. Goroff called many of those statement misleading. "We know the United States' position in the world is much weaker now than four years ago," she said. "By turning our backs on allies and ignoring our adversaries, the president has put us at risk and in danger." Withdrawing from the Iran nuclear deal "brought Iran so much closer to a nuclear weapon. . . . How are we ever going to get a deal with Iran on anything else when we signed an agreement and then pulled out, when all our allies were with us?"

The president's contradictory messages on the presence of American troops in Syria was another foreign policy blunder, she said, yet Mr. Zeldin had recently said on Twitter that Mr. Trump deserves the Nobel Peace Prize. "This is what we are dealing with," she said. "We need grown-ups in the room."

The sharpest exchanges came when Mr. Zeldin accused Ms. Goroff of dishonesty. He supports health insurance coverage for people with pre-existing conditions, he said, and criticized advertisements by 314 Action, a group that works to elect scientists, doctors, and technology, engineering, and mathematics professionals, for what he called deceitful characterizations of his positions with respect to abortion and birth control. He challenged Ms. Goroff to either provide the facts on 314 Action's assertions or call on the group to curtail the advertisements.

"I am not responsible for what 314 advertises," Ms. Goroff angrily replied, "but you are for your campaign's ads, and your campaign is advertising that I want to defund the police when I have said very clearly, over and over, that I do not. If you want to talk dishonesty in ads, take down your own ads now instead of pretending that I have a position that I do not have."

Ms. Goroff also criticized Mr. Zeldin for a failure to repeal the $10,000 cap on state and local taxes imposed in the Republican-led tax overhaul of 2017, noting his "no" vote on the 2019 Restoring Tax Fairness for States and Localities Act, which would have doubled the deduction and restored the top marginal tax rate to 39.6 percent. "He was unable to keep this, which affects taxpayers in our district, out of his party's tax bill." Mr. Zeldin "had the opportunity to make it right . . . and he chose to vote against it."

Mr. Zeldin said he voted against that 2019 bill because it "would permanently increase tax rates in exchange for temporary change to" the state and local tax deduction.