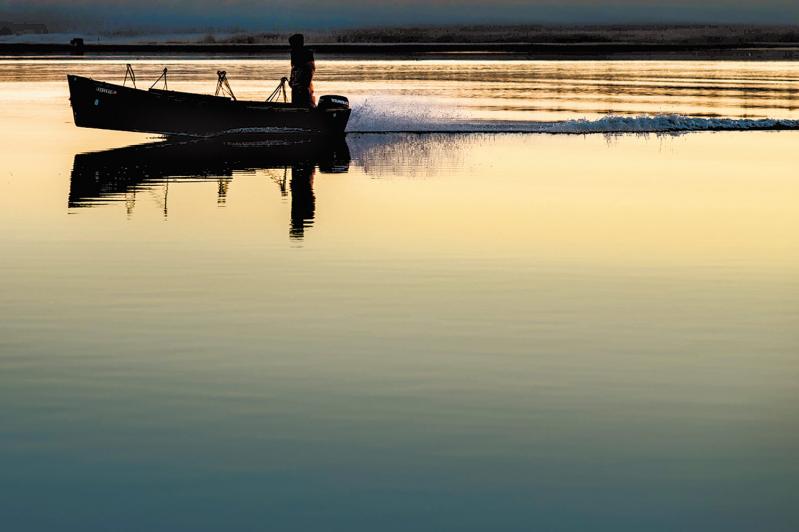 A bayman headed out in search of scallops on a glassy morning two years ago probably found an ample supply. Not so this year after a die-off that ranged from 90 to 100 percent in some waterways.
Max Philip Dobler
By Christopher Walsh

The “four horsemen of the ocean climate change apocalypse” have arrived, a scientist told those attending a symposium Friday on the bay scallop die-off of 2019, and they pose a serious threat to the embattled species.

Warming water temperatures, hypoxia (a deficiency in oxygen), ocean acidification, and harmful algal blooms, said Christopher Gobler of Stony Brook University’s School of Marine and Atmospheric Sciences, are each a stressor to the bivalve and local delicacy. The occurrence of more than one at one time, he said, may be responsible for the die-off of between 90 and 100 percent of bay scallops in areas throughout the Peconic Estuary, which has prompted Gov. Andrew M. Cuomo to ask the United States Commerce Department for federal action to help the fishery (covered elsewhere in this issue).

The bay scallop fishery is “notorious for booms and busts,” Stephen Tettelbach, a shellfish ecologist who conducts population surveys as part of Cornell Cooperative Extension’s shellfish restoration efforts, said at the symposium, which was held at the Stony Brook Southampton campus. Year-to-year variability, he said, is a result of scallops’ life span of one to two years.

“They spawn during one season, usually, and then they die before they spawn a second season. It works out great for the fishery because they live for six, eight months after they spawn so harvests can come along. . . . It really does not impact the next year very much.”

But a series of brown tides decimated the population beginning in 1985. Restoration efforts by the Cornell Extension were demonstrably succeeding through last year, Dr. Tettelbach said. “There was a great set of scallops in 2018, so expectations were high for a good harvest season for this year. And then things changed.”

“This was a warm year,” he continued, citing United States Geological Survey monitoring data showing water temperatures in the mid-80s last summer. “The lethal limit for scallops has got to be about 88 degrees, so we’re getting pretty close to that red line.” Dissolved oxygen levels were low, he said.

It is uncertain how stressful spawning is to bay scallops, he said, but “one of the things that is a possible explanation for some of the die-off is that there’s a certain level of physiological stress to scallops at the time of spawning or after spawning, and in conjunction with high water temperatures and/or low dissolved oxygen levels.”

Dr. Gobler spoke of symptoms of climate change, which he noted go beyond warming. “We know the direction global temperatures have been going,” he said. In fact, global satellite data detailing daily ocean temperatures since 1982 reveal “how our temperatures have changed” since then — “far beyond what we call the global average, it’s almost 3 degrees centigrade. That’s more than is predicted for some parts of the world’s oceans in the next 100 years, and that’s just happened in the last 30 years. So we are in a warming hot spot.”

“We also know that as those temperatures go up, the oxygen content of the ocean is going down. And we have more and more regions in the world’s oceans, and in the coasts . . . more and more of these hypoxic zones showing up around the world. (A report by the International Union for Conservation of Nature, The New York Times reported on Saturday, concludes that oxygen levels in the world’s oceans declined by approximately 2 percent between 1960 and 2010, a phenomenon largely attributed to climate change.)

As the oceans absorb more and more of the carbon dioxide emissions from electricity generation, transportation, and heating, they become more and more acidic. “This has important consequences for any calcifying animal like the scallop,” Dr. Gobler said. He referred to a paper coauthored by Dr. Tettelbach that modeled the populations of bay scallops and hard clams in Long Island estuaries, which concludes that bay scallops are far more sensitive to carbon dioxide than hard clams. “Bottom line, this population is very sensitive to acidification and CO2.”

Scallops will thrive under ideal conditions, Dr. Gobler said. The introduction of a stressor will raise mortality. With the addition of a second stressor, “you get very, very little survival. Small environmental perturbations can lead to big effects for these scallops.”

Bradley Peterson, a professor at the School of Marine and Atmospheric Sciences, discussed bay scallop habitat and predation in the context of the die-off. There was no significant change in the abundance of sea grass, an important habitat for juvenile scallops, this year. Whelks prey on adult scallops, but nothing suggests a spike in that population, “and to figure out the timing of what it would take for the whelk to consume them over such a short period, it just goes to totally impossible for the whelks to be responsible for the tremendous, quick loss of scallops.”

The cownose ray, a species common to southern waters, was observed this year, Dr. Peterson said, but there was no significant loss of juvenile scallops, “the most susceptible of the life stages. . . . Cownose rays were present and in high numbers, but not in all parts of the Peconics. . . . I’m not sure that we can totally eliminate the potential for predation, but the evidence is not rock solid for this year.”

Bassem Allam, who runs the School of Marine and Atmospheric Sciences’ Marine Animal Disease Lab, discussed biological agents known to affect bay scallops, some of which are known to cause mortality. There are no possible practical treatments, he said. “What can we do?” he asked. Selective breeding for resistance to disease and environmental stressors was one answer, along with avoiding introduction of pests or path­ogens.

Joyce Novak of the Peconic Estuary Program said that a technical review committee was convened to study the die-off. It met on Nov. 22 and will meet again tomorrow, with the hope of providing answers “as quickly as time, logic, and clear evidence allows.”

The D.E.C. is participating in that effort to determine the die-off’s cause and make recommendations as to future research and monitoring, said Debra Barnes, the agency’s shellfisheries bureau chief. The agency is also exploring a restoration of the wild population through expanded seeding and monitoring efforts — no monitoring is at present done in the summer, she said, when the die-off likely occurred.

Referring to Dr. Allam’s remarks, she said that a selective breeding program could improve scallops’ resilience to environmental and biological stressors, “in particular high temperatures related to climate change, so that we can support the long-term restoration of the species.”

The unexpected loss of the bay scallop this year “represents a total collapse of the fishery,” she said. For baymen, “it’s just a devastating economic impact to those people that rely on the bay scallop resource during a certain portion of the year.” The scallop-harvesting season runs from November to March 31.

One possible sign of hope, Dr. Tettelbach said, is “a really good set of scallops this year,” juvenile scallops that could be harvested next year, “and especially in the eastern part of the bays. . . . The number of juvenile scallops is well above what we’ve seen in the last five years. That’s the good news. We’ll see what happens going forward, but at least there are some juveniles.”