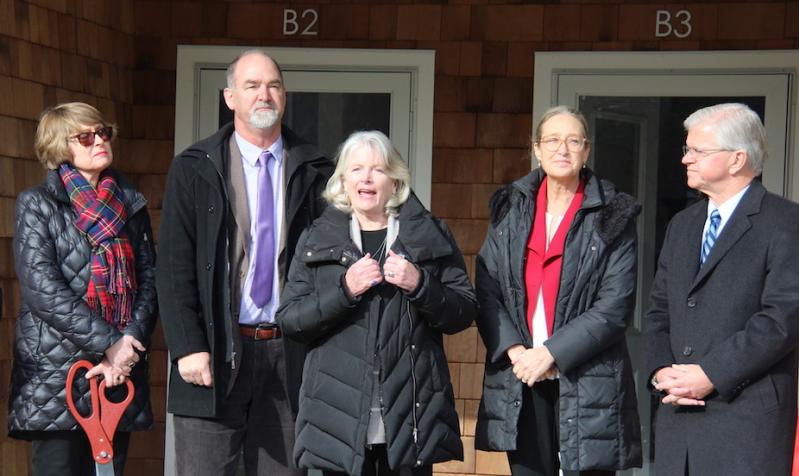 One day after voting to acquire 12 acres of land and designate a majority of it for "municipal and housing purposes," the East Hampton Town Board marked the completion of the 12-unit "manor house" condominium development in East Hampton, the first of its kind in the town's affordable housing program.

Each of three buildings on the complex comprises a single one-bedroom condominium apartment, two two-bedroom apartments, and one three-bedroom apartment. Sale contracts are underway for each of the units, prices for which range from $126,835 to $267,850.

The supervisor credited Tom Ruhle, the town's housing director, Francis Bock, who works in the Department of Housing and Community Development, and Amado Ortiz, an architect with the East Hampton Housing Authority, for the manor house concept, "which is to look like a house that is upscale, and to have dozens of configurations of these multiple units put together to look more like a larger single-family home."

A goal is "to duplicate this concept of manor houses as well as build some other single-family homes," the supervisor said, noting the town board's vote last Thursday to acquire land at 395 Pantigo Road in East Hampton and property acquired last year off Route 114 in Wainscott, both for housing purposes, and Gansett Meadow, a 37-unit apartment complex under construction on Montauk Highway in Amagansett.

Mr. Van Scoyoc credited Councilwoman Sylvia Overby, the town board's liaison to the Department of Housing and Community Development, for helping to revive the project from dormancy to completion.

"I'm very grateful to Amado for the concept to begin with, and for his ability to come back and make it actually happen," Ms. Overby said of Mr. Ortiz. "His dedication to affordable housing in East Hampton is really apparent and I thank him for all of that, and I thank the town board members for supporting everything that we've been doing on affordable housing."

Mr. Thiele "was instrumental in helping us work through the intricacies having a condominium offering for affordable housing with the attorney general's office," the supervisor said. Ms. Fleming "was helpful in getting down payment assistance funding for people who were applying for loans to inhabit these beautiful buildings," he said.

"The Town of East Hampton leads the way when it comes to providing affordable housing opportunities," Mr. Thiele said, but added that there is always more to be done. He took the opportunity to urge the gathering to encourage Gov. Andrew M. Cuomo to sign pending legislation that would authorize East End towns to establish a community housing fund through a 0.5-percent real estate transfer tax. It has passed both the Assembly and the Senate.

Ms. Fleming called the project "a unique and innovative approach to add to the affordable housing inventory that's so important for our local economy and to keep East Hampton as vital and lively as it is."

The property will be dedicated to the late Barbara Jordan, a member of the town's housing authority who "worked tirelessly for the concept of continuing affordable housing within this community," Mr. Van Scoyoc said.