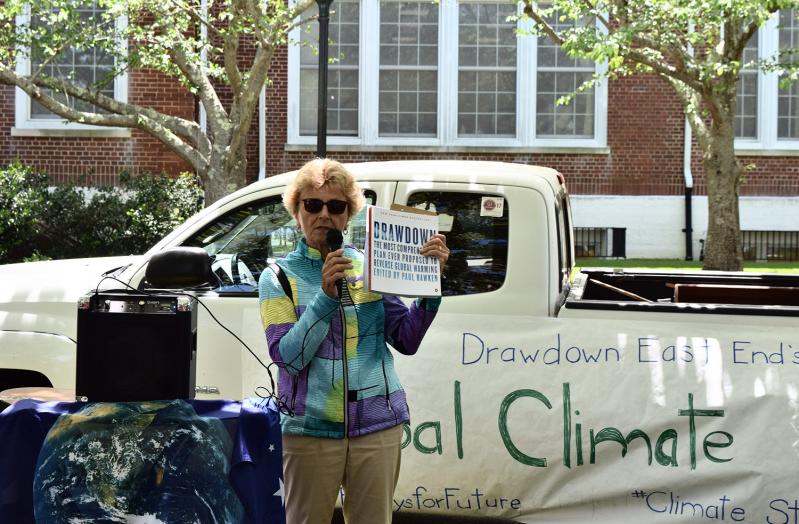 Josephine DiVincenzi, a former science teacher and principal of Southampton High School, said that the “Drawdown” book provides a blueprint for solving the climate crisis.
By Christopher Walsh

In solidarity with Friday’s Global Climate Strike, in which citizens of more than 100 countries demanded action on the looming climate crisis, around 45 people gathered outside Southampton Town Hall, where members of the group Drawdown East End and others urged adoption of policies outlined in “Drawdown: The Most Comprehensive Plan Ever Proposed to Reverse Global Warming,” commonly referred to as Project Drawdown. Perry Gershon, an East Hampton resident who challenged Representative Lee Zeldin in New York’s First Congressional District last year, was among the speakers, as were Edwina von Gal of the Perfect Earth Project, Josephine DiVincenzi, a former science teacher and principal of Southampton High School, and several students from the East End.“Staying home and complaining will not change anything, but coming out to these events can,” Ashley Ambricio of Riverhead, who will minor in environmental science at Stony Brook University this fall, said at the event. “Starting that conversation is one of the most important steps. . . . People often despair when they understand the magnitude of the situation, but what they often forget is that they have the power to change.” A collaborative effort to fundamentally change practices — composting, shopping at farmers markets, using public transportation, and volunteering and donating to environmental groups were all suggested — will “make all the difference,” Ms. Ambricio said. “But without the push from the people, this will not happen. Together, we will change the world for the better.” Ms. DiVincenzi said that “science should be at the base of most of the decisions we’re making . . . and yet we’re ignoring it.” Project Drawdown, she said, was constructed by leading scientists around the world and lays out solutions to climate change. “We need to use it as the blueprint for going forward,” she said. “Yes, the town has done wonderful things, but we need to recommit every day. This is a crisis, and we have very few years left to turn it around. So let’s get busy.”Orson Cummings spoke about his successful campaign to enact a ban on gas-powered leaf blowers in Southampton Village, which he said demonstrates that grassroots action can succeed. That village enacted a ban on the devices, which Mr. Cummings said are vastly more polluting than a Ford F-150 truck, from May 20 to Sept. 20, and other restrictions throughout the remainder of the year. The East Hampton Village Board will hold a public hearing on similar legislation next Thursday.“This is really to the youth,” Mr. Cummings said. “If you speak, you will be heard. . . . I want to live here for the rest of my life, and I’d rather it didn’t go underwater.” “We’ve talked about what we can all do as individuals, and that’s critically important,” said Mr. Gershon, who is seeking the Democratic Party’s nomination to challenge Mr. Zeldin again next year. “But we must do more at a federal level. Government has got to be our partner. We can’t be alone in New York State without the whole country . . . without the whole world, being our partner.” Ms. von Gal, whose company practices chemical-free landscaping, said that the earth is a closed loop. “Can you make your property a closed loop? . . . Twenty percent of our landfills is yard waste. It is not waste. That is the food your land made for itself. It’s much better than anything you can buy. It’s biologically attuned to do the right thing for that piece of land. So my challenge to everybody is, see if you can close the loop on your property: no biomass leaves your land.” Vinny McGann, a member of the Surfrider Foundation’s Eastern Long Island chapter, echoed Ms. von Gal’s remarks, referring to composting. Project Drawdown cites the U.N. Food and Agriculture Organization’s conclusion that 30 percent of food is wasted globally, contributing to 8 percent of total global greenhouse gas emissions. “Composting is fairly simple,” he said. “Stop taking green biomass to landfills.” We face a crisis, he said, “but it is also a moment of hope, of looking to the future,” noting that grassroots movements have led to bans on plastic straws, single-use plastic bags, and Styrofoam. “We can do it,” he said. Dramatically curbing fossil fuel emissions is essential to minimizing temperature rise and thus the worst impacts of climate change, but as Project Drawdown explains, fundamental change in land use and practices is also important. Mary Foster Morgan, an organizer of Drawdown East End, said this week that carbon sequestration in soil “is a big part of the carbon picture.” A bill now in the New York State Assembly would establish a tax credit for farmers who maximize carbon sequestration potential through a “carbon farming” strategy of soil and vegetation management. “We can go back to a type of farming that enriched the soil with carbon,” said Ms. Foster Morgan, who is also co-leader of the Long Island East chapter of Citizens Climate Lobby.  Reducing consumption of red meat would also lower greenhouse-gas emissions while improving human health, she said. “If we lowered our intake, we would be healthier, but when you learn more about it, there is a way to raise beef cattle that works with nature and puts carbon back into the soil. It’s really a matter of tweaking your farming practices.”Drawdown East End is “getting organized,” Ms. Foster Morgan said, its volunteers operating on a shoestring but its membership steadily growing. The group is hoping to initiate weekly meetings, its mission “to jumpstart solutions” as presented in Project Drawdown. “If we scale them up,” she said, “we can reach this point of drawdown, a time when carbon is being drawn down from the atmosphere rather than more of it going up.”The group can be contacted at [email protected].