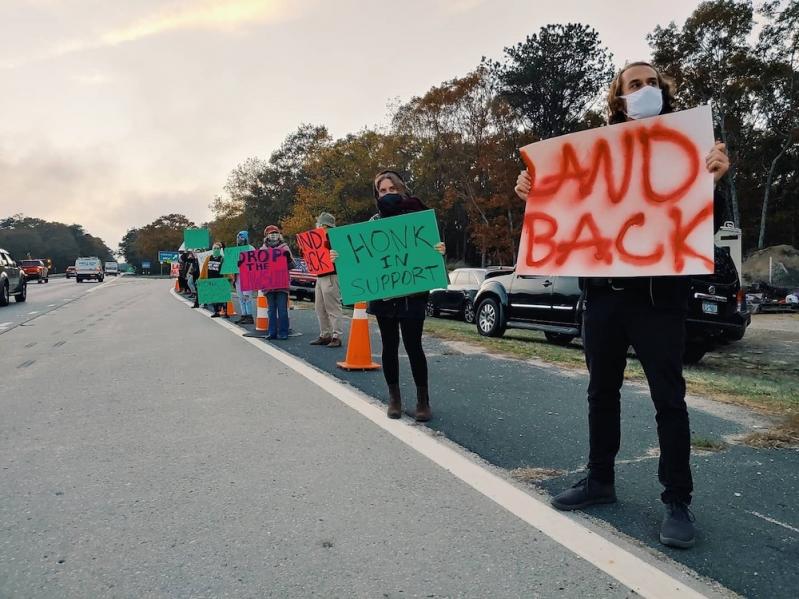 Allies of the Shinnecock Nation Warriors of the Sunrise joined them in a demonstration near Sovereignty Camp in Hampton Bays earlier this month.
Tela Troge
By Bella Lewis

Last week Tela Troge, a spokeswoman for the Shinnecock Nation Warriors of the Sunrise, looked ahead to the final week of a nearly monthlong occupation of historical aboriginal territory near the Sunrise Highway in Hampton Bays.

The encampment site was chosen because of its proximity to the two Shinnecock billboards, one unfinished, that have become symbols of contention between tribespeople and the town and state governments. The Shinnecocks, who refer to the billboards as "monuments," say that the tribal land the billboards sit on, which they call Westwoods, just west of the Shinnecock Canal and north of Canoe Place, is exempt from local, county, and state regulation, but the town and state have argued otherwise.

"We're on day 17 now," said Ms. Troge, 33. Thanksgiving Day was to be the final day of what organizers are calling Sovereignty Camp 2020. The occupation "is really a twofold struggle to get Southampton and the state to recognize us as a sovereign nation," Ms. Troge explained on Nov. 17.

Just after the first billboard was up and running in May 2019, New York State Attorney General Letitia James filed papers in State Supreme Court on behalf of the State Department of Transportation requesting a temporary restraining order to prevent the tribe from finishing construction on the 61-foot-tall electronic signs at either side of Sunrise Highway near mile marker 511. The order was granted, but this May, in a win for the tribe, State Supreme Court Justice Sanford Neil Berland rejected New York State's request for a preliminary injunction to have the signs removed.

"It is undisputed that the Shinnecock Nation's ancestral domain encompassed essentially the entirety of what is now the Town of Southampton," he wrote in his decision, "and it has been established that the presence of the nation in that domain has been continuous."

Ms. Troge was impassioned by Justice Berland's definite language in the May ruling. She emphasized the fact that "he told the state it was impossible for them to win the case." Indeed, he had written, "it is impossible to conclude that the plaintiffs" -- the state and Southampton Town -- "will succeed" in refuting the nation's "sovereign control over the Westwoods property."

The electronic billboard on the westbound side is only about three to seven days away from being finished, said Ms. Troge, now that electrical wiring has been settled with PSEG Long Island. Even with Justice's Berland's ruling, however, there is a significant financing issue since commercial ventures are less appealing when the advertising site is under litigation.

Ms. Troge believes New York State's ability to hold the litigation up, even when it is not the lawsuit itself preventing progress, is nothing short of bullying.

"We really are not in a good place to be able to provide for our people in this time. Winter is not going to be a pretty situation for those struggling with food insecurity." Ms. Troge's determination to exercise the tribe's right to develop the Shinnecock economy through billboard advertising is fueled by her community's dire situation.

"You shouldn't be bringing a lawsuit against people who are food insecure. Sixty percent of the territory are living in poverty." Ms. Troge contends that it is unlawful "to sue an Indian tribe because we have sovereign immunity. . . ."

In Ms. Troge's mind, the situation is nothing short of economic warfare and economic genocide. "How could this be really happening for 400 years and everyone just looked the other way? We have nothing to lose, we literally have nothing to lose, so we have to do anything and everything to get New York State to drop the lawsuit on Nov. 26."

Ms. Troge said that the 31 feet of advertising space on the billboard is "an extra small footprint" for a project that could improve the quality of life for the Shinnecock people.

Much of the advertising on the billboard that is already operational has been by medical companies, but "unfortunately there's a hate campaign targeted against us, which must be a local group, because every time we put up an advertisement they harass the advertising company," which compounds the feeling of economic warfare for the Warriors of the Sunrise.

Among other things, organizers of Sovereignty Camp are demanding that the state drop its lawsuit against the tribe over the monument, that it "recognize and respect" the Shinnecock Nation's trade and fishing rights, and that it pass a graves protection act. They want Southampton Town to prioritize community preservation fund purchases of land in Shinnecock Hills, to "recognize and respect Shinnecock land boundaries," and to "meet in good faith with the selected members of the Shinnecock Nation to discuss real and tangible paths to restitution regarding illegal land sales and transfers." They are calling on both the town and the state to respect Shinnecocks' sovereign rights "to pursue any and all economic ventures and cease and desist their attempts and efforts to interfere with that right."

In addition, they are calling on the federal government to formally recognize Shinnecock territory as "restricted-fee land and 'Indian Country' for all purposes." They are looking to the federal government for help in litigation against the state "for the theft of the Shinnecock Hills in 1859" and asking that it help the tribe acquire "trust land and reconcile racist 1930s policies against Shinnecock people due to the color of their skin and the texture of their hair that currently prevent Shinnecocks from acquiring trust land."

As to progress thus far during the occupation, "not enough has been made at all," Ms. Troge said. Attorney General James, Southampton Town Supervisor Jay Schneiderman, and representatives from Gov. Andrew M. Cuomo's office have been in touch, but with no movement forward, said Ms. Troge.

Nevertheless, she reported last week that spirits were high and that those at the camp are dedicated to the cause and standing with Shinnecocks at Sovereignty Camp. "It's really beautiful, actually." Ms. Troge said those who visited the camp at the beginning say it has gone from a town to a city.

Early last week there were 35 people, including Shinnecocks and allies from the Long Island Progressive Coalition, the Red Nation, and the Indigenous Kinship Collective at Sovereignty Camp. About three Shinnecock elders have been there full time, said Ms. Troge, and more came and went.

"We have daily camp activities, basic things like cooking, tending the fire, doing registration, or temperature checks. We all prepare for action and make signs and have classes and seminars on things from astrology to self-defense."

The camp also had a library and hosted an education night and talking circles. Campers prepared for demonstrations, as well as carried out mutual aid for the Shinnecock territory by making care packages with hand sanitizer, soap, a lot of diapers, and paper towels. Organizers set up a GoFundMe page online to raise money to sustain the camp and purchase an R.V. to travel between Shinnecock territories and other indigenous communities that need "sovereignty assistance." It can be found by searching "Sovereignty Camp" at gofundme.com.

"It is very difficult with Covid, obviously," Ms. Troge said. "There are travel restrictions, and we have to maintain a camp culture that follows strict protocol. The good side is that we are outside and everyone is six feet apart."

As the protest winds down on Thanksgiving Day, Ms. Troge said, "Obviously we have to take a big action. New York State knows. Everyone knows."

There had already been a lot of surveillance by New York State troopers and the Department of Transportation, she said. This week, "We will have experienced organizers and activists right there on the highway, the only way to get out to the Hamptons. They know, they are already prepping for it. I don't think you need to say it, but there's also ample time to drop the lawsuit."