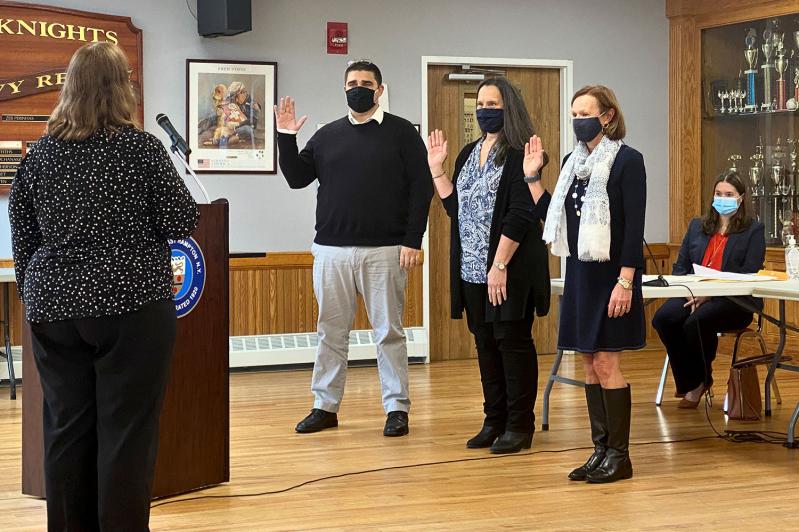 A reconfiguration of East Hampton Village government in which Marcos Baladron, the new village administrator, relinquished the post's former duties of clerk and treasurer, and Pamela Bennett, the deputy clerk, and Dominique Cummings, the deputy treasurer, assumed those offices respectively, was approved by the village board last Thursday.

According to village code, a village administrator serves as clerk and treasurer, supervising "all functions and activities of the village," all of its expenditures, and most of its officers and employees, among other responsibilities.

Becky Molinaro Hansen, who had been the village administrator since 2013, left the position on Oct. 16. At a board meeting that day, Mayor Jerry Larsen sought the board's approval to replace her with Mr. Baladron, the owner of a management consulting company, who had served as Mr. Larsen's campaign manager. The hiring was approved in a partisan vote with Christopher Minardi, the deputy mayor, and Sandra Melendez, a trustee, both members of Mr. Larsen's NewTown Party, affirming the mayor's choice.

Their colleagues Arthur Graham and Rose Brown, members of the Fish Hooks Party, said they were not prepared to approve Mr. Baladron because they had not received his resume nor any other information about his qualifications for the job. Mr. Graham voted against the appointment; Ms. Brown abstained.

"Originally, our village administrator wore all three of the hats [including] clerk and treasurer [and] when that office was vacated suddenly we were kind of left in a strange situation," Mayor Larsen said last Thursday. "I don't think that should ever happen again."

Along with their promotions, Ms. Bennett and Ms. Cummings each received a $20,000 salary increase. June Lester, an administrative assistant who was promoted to deputy clerk, received a $5,000 raise.

Despite the curtailment of Mr. Baladron's duties, Mr. Graham said he was still ill-suited to serve as village administrator. "At our last meeting, Marcos Baladron was hired at a salary of $145,000 for a job that he was not qualified to take," Mr. Graham said. "I voted against [Mr. Baladron's] appointment because I had not been supplied with a copy of his qualifications. Now that I have received Marcos's resume, it is clear to me that Marcos is not qualified for the job."

"I realize that Marcos is a smart guy, and I realize also, Jerry, that you want your people around you . . . but I think that we really should try and find a qualified village administrator," he added. He noted that reconfiguring the position has come with added expense. "We've had to split off the clerk and treasurer from the administrator job at a cost of $45,000 to the village," he said. "When Becky Molinaro Hansen took the job as village administrator with the correct municipal experience, she got paid $95,000."

Another item on the agenda was related to the sudden departure of Ms. Hansen, who, according to the mayor, had given just a few days' notice prior to resigning. The board was about to vote to require all employment agreements to include a clause requiring 90 days' notice, when Mr. Graham pointed out that "90 days is an awfully long time to tie somebody up," and that qualified candidates might balk at agreeing to such terms. Mayor Larsen tabled the proposal.

Mr. Larsen then asked board members for input on a proposal to have the Suffolk County Board of Elections take over the management of village elections from the village. "The last one was a tremendous amount of work for Village Hall," he said. The trustees wanted to get more information on the cost and other details before making a decision.

The village will seek bids to operate the Chowder Bowl concession at Main Beach for the next five years. The board discussed amending the lease to allow the vendor to operate for longer hours, and to require the business to offer breakfast, lunch, and dinner, and to accept credit cards.

A proposal from Dianne Benson, chairwoman of the L.V.I.S. nature trail committee, to install a box for a Little Free Library on the nature trail was warmly received by board members. A vote to authorize the project will be held at the board's next meeting, on Nov 20.

The board approved the creation of an information technology department at Village Hall, accepted the resignation of Lys Marigold from the Zoning Board of Appeals, and appointed Joseph Rose as her replacement.

A public hearing on the village's new mobile parking enforcement system was scheduled for the Dec. 18 board meeting.

Trees, Wreaths for Sale in Amagansett
Holiday Cheer Is Coming to Sag Harbor
Even More Thanksgiving Options From the Pike and Old Stove
END_OF_DOCUMENT_TOKEN_TO_BE_REPLACED