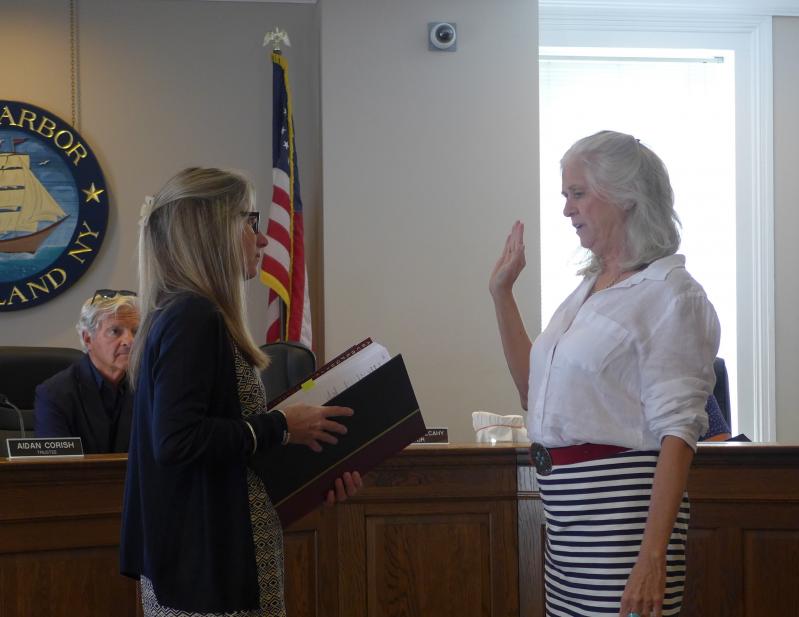 When town supervisors and village mayors, like Sag Harbor Mayor Kathleen Mulcahy, above, take the oath of office they know they will be faced with emergencies, but few could have imagined they would be dealing with this particular variety of emergency.
Jamie Bufalino
By Jamie Bufalino

As Suffolk County Executive Steve Bellone leads the regional response to the COVID-19 pandemic, the most important role for town supervisors and village mayors to play is to provide “proper messaging” for their constituents, make sure emergency services are well prepared and staffed, meet residents’ needs for food and other essentials, and stay positive, said Southampton Town Supervisor Jay Schneiderman, who heads up the East End Supervisors and Mayors Association.

“We need to support those on the front lines of crisis, particularly the health care workers,” Mr. Schneiderman said. “None of us have direct experience with this, even in my 27 years of government experience I’ve never faced anything like it.”

Town supervisors and mayors on the East End are staying in daily contact with county officials and advocating for more testing sites and other resources for their municipalities, Mr. Schneiderman, East Hampton Village Mayor Richard Lawler, and Sag Harbor Mayor Kathleen Mulcahy said in interviews this week. East Hampton Town Supervisor Peter Van Scoyoc did not return requests for an interview.

County officials hold a daily teleconference with East End supervisors and mayors, and every day “the first question always asked is ‘When will we be getting more test sites?’ “ said Ms. Mulcahy on Monday. “We keep getting told not anytime soon.”

In addition to the daily call with the county, members of the East End Supervisors and Mayors Association hold a conference call twice a week to discuss the crisis. During a recent conversation, they discussed how to contend with an influx of visitors to the region. The officials had decided not to require new arrivals to self-quarantine, said Mr. Lawler and Ms. Mulcahy, but on Tuesday night, the East Hampton Town Police Department asked new arrivals from New York City to do just that.

“Our community is both a summer community and a winter community, these people are just as scared as everyone else,” said Ms. Mulcahy of those arriving recently. She also said she’s heard from several part-time residents who are seeking to lend a hand. “They said, ‘We’re here, we’re rich, tell us how to help,’ “ she said.

Nevertheless, Dr. Deborah Birx, a member of the White House’s coronavirus task force, said on Tuesday that a surge in infections on Long Island may be traced to those coming from New York City. “Everybody who was in New York should be self-quarantining for the next 14 days to ensure that the virus doesn’t spread to others,” she said at a press briefing.On Friday, Gov. Andrew M. Cuomo ordered that as of Sunday at 8 p.m. all non-essential workers must stay home and that people should limit their trips out of the house to essential errands and solitary outdoor recreation. All gatherings of all sizes should be canceled or postponed under the order.

Such measures are helpful in mitigating the pandemic, but, according to the World Health Organization, the key to stopping it is increased testing so that infected people can be identified and isolated. “You cannot fight a fire blindfolded,” said Dr. Tedros Adhanom Ghebreyesus, W.H.O.’s director general, at a press briefing on March 16. “The most effective way to prevent infections and save lives is breaking the chains of transmission. You must test and isolate.”

New York, which has become the national epicenter of the outbreak, has done more testing than any other state, according to Governor Cuomo, and the drive-through test site set up at Stony Brook University on March 18 had done more than 3,300 tests as of 1 p.m. on Tuesday. Even more testing is needed, said the local officials.

“The fact that we’re this far behind the eight ball is awful,” said Ms. Mulcahy. “I always tell people if you feel sick, assume you have it, and isolate.”

Ms. Mulcahy, Mr. Schneiderman, and Mr. Lawler praised the leadership provided by Mr. Bellone and his team, and made it clear that the county is not to blame for the lack of testing. “They’re doing a phenomenal job, as is our governor,” said Ms. Mulcahy.

Some residents of East Hampton Village, which had its second case of COVID-19 confirmed last weekend, have been requesting that the village close down the beaches and Herrick Park to prevent people from congregating en masse, said Mayor Lawler. He’s disinclined to do so, he said, because Governor Cuomo has not ordered the closing of parks or other open spaces. “My orders don’t supersede the governor’s,” he said.

The village has closed the children’s play area in Herrick Park because the virus can linger on plastic and metal, he said.