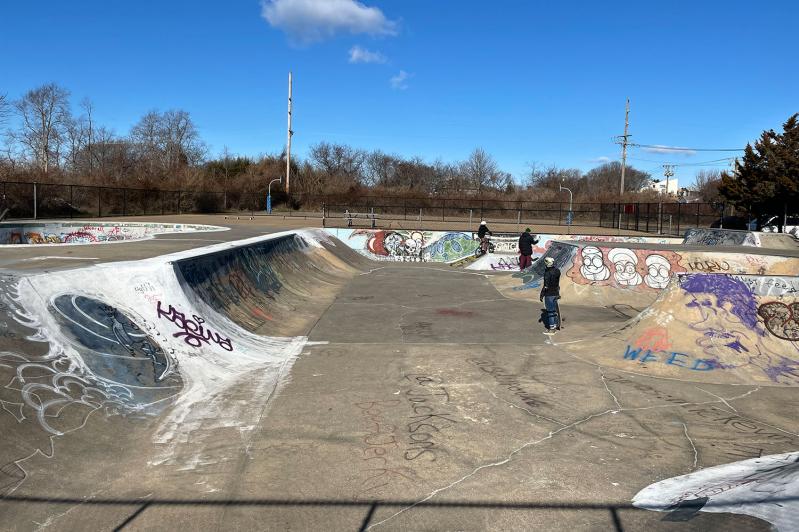 Members of a committee hashing out plans for renovating and expanding the Montauk skate park have already had discussions with four park designers out of 10 who have expressed interest in the project.
Jane Bimson
By Jack Graves

If done right, "Montauk's skate park could become a destination," said John Britton, the father of an 11-year-old skateboarder who is working with East Hampton Town Councilman David Lys to advocate for a renovation and expansion of the skate park.

Lys and fellow advocacy group members -- who also include John Rooney, the town's parks and recreation director, and Tim Garneau, a town trustee -- hope that a public-private partnership will raise the money that will put the ambitious plan over the top. Already, there is some $300,000 that is reportedly either in hand or pledged for the project.

Lys's presentation on the renovation and expansion of Montauk's skate park to fellow East Hampton Town Board members at Tuesday's work session was, by all accounts, very well received.

"There's been a great surge of interest in skateboarding over the past 20 years . . . not only among children, but among adults," said Britton. It was just over two decades ago that Andy Kessler, the late skateboarding legend, designed the park off Essex Street. "Park designers . . . would like nothing better than to have their names associated with a project like this. This could really be something great, a great park for experienced and beginning skateboarders."

Both Britton's 11-year-old son and 12-year-old daughter are surfers, but his daughter doesn't skateboard, he said, in part because of concerns about abrasions since the concrete at the park has "become so weathered over the years."

Councilman Lys said later on Tuesday that he'd been so encouraged by the board's reaction to his proposal, which he estimated will wind up costing between $500,000 to $600,000, that he will "reach out to the town's engineering firm to assist in the project's engineering and design." He will propose on Tuesday that more money be put into the town's capital budget, which already has in it $30,000 Lys earmarked not long ago toward construction of a four-foot half-pipe for younger skaters that has yet to be built.

The councilman and his 14-member advocacy group, which has already met with four of 10 or so designers who have indicated an interest in taking on the project, as well as with the Tony Hawk Foundation of California, envision a public-private partnership in which New York State, the East Hampton Town Board, and the public would participate.

The state apparently enters in because it owns a right of way on which the present 9,000-square-foot skate park and the ball field and soccer field below it sit. In years past, the right of way was to have been part of a highway taking people out to the Montauk Lighthouse. "In Carl Fisher's time, I think it was," said Lys, who expects the state also to look upon the proposal favorably.

The 6,600 to 7,000-square-foot area proposed for the skate park's expansion would cover a former basketball court adjacent to the existing park, "and some land to the west," said Lys, who also wants to clear vegetation so that there will be a sledding hill and to add solar lighting bordering a stairway that links the skate park with the ball field.

"There's an outside chance that this may all be done by midsummer, but definitely by the fall," said the councilman. "There's been 20 years of use -- it's time, especially given the surge of interest, and the fact that this park can be used the year round."

"Whenever it's not raining, the kids are there," Britton said.

"It's a model project, there's been a groundswell of enthusiasm out there," Lys said.

Councilwoman Sylvia Overby, the town board's former liaison to the Montauk Citizens Advisory Committee, "got more emails on this than she did on the windmill project," said Britton.