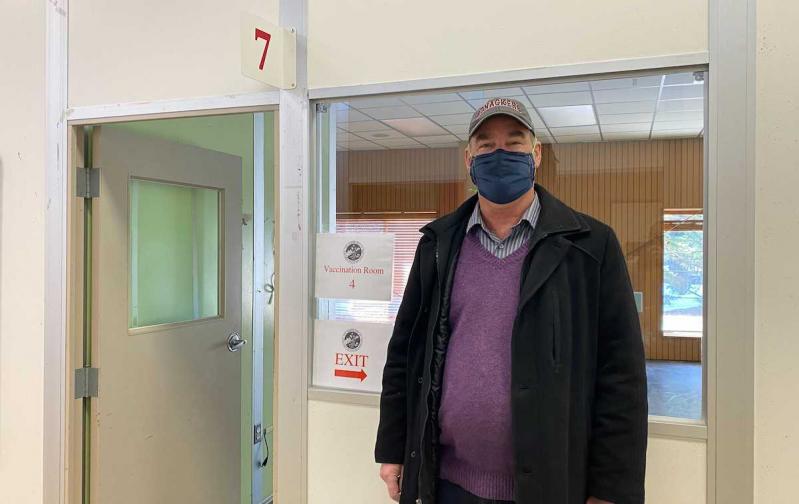 East Hampton Town will receive 300 Covid-19 vaccine doses from Suffolk County on Friday, and on Saturday will use them to vaccinate firefighters, teachers, and other members of the 1b eligibility group at the town's new mass vaccination site, Supervisor Peter Van Scoyoc said on Friday.

"We've reached out to all the local fire departments to get a list of their personnel who are not yet vaccinated, and we've reached out to local school districts," Mr. Van Scoyoc said. "Because we have 600 to 700 teachers in the districts, we've asked them to prioritize their list based on those who are most at risk, either because of their age or underlying health issues." Only people who have been contacted by the town are eligible to receive the vaccine tomorrow.

Mr. Van Scoyoc stopped by the vaccination site, in the former Childhood Development Center of the Hamptons building, on Friday morning, before making the drive, with a police escort, to pick up the vaccines from the county.

The development of the site, which contains the medical-grade refrigerators required to store the vaccine, was a key factor in getting the allotment from the county, he said. "The East End is geographically removed from the rest of the county, and most of these mass distribution sites are far away, even Riverhead is a hike for most people out here, so it became clear to me that the best opportunity for getting vaccinations in East Hampton was to build out a POD [point of distribution] site to demonstrate that we were capable of receiving vaccines and being able to administer them," he said. "So this our first shot at it, no pun intended."

As more vaccine doses become available, Mr. Van Scoyoc said he hopes "the town itself can become the entity that receives and distributes the vaccine directly from the state." He would also like to see the space used by doctor's offices and pharmacies as a central hub for vaccinations.

Hundreds of people have offered to volunteer at the site once it is fully up and running, he said. Those without medical skills will help direct traffic, and doctors, registered nurses, and emergency medical technicians, all of whom have been certified to administer vaccines, will provide the shots.

"Having this space ready to go really made a difference, and we're hoping we can build on this opportunity and do vaccinations on a regular basis," he said.