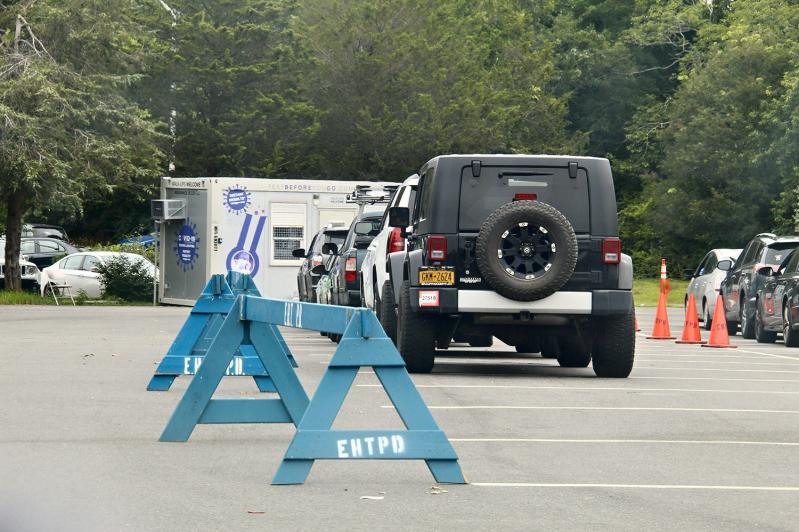 The Covid-19 testing company operating at Town Hall and in Montauk has ceased its contract with East Hampton.
Durell Godfrey
By Christopher Walsh

Medivolve, the company contracted by East Hampton Town to provide Covid-19 testing at sites in East Hampton and Montauk, will no longer operate those sites.

The company is ending its contract with the town, according to a letter it sent to the town board dated Sunday. Making no mention of that letter, the town board voted on Tuesday to terminate its license agreement with Medivolve.

The company has been criticized by some residents, who complained about slow turnaround times for test results and inconsistent service during the latest, Delta variant-fueled surge of Covid.

A California newspaper reported last month that the state's Health Department is investigating Medivolve, which also operates testing sites there, and that Sonoma County officials are urging residents to be tested elsewhere after numerous complaints about its test results and billing practices.

On Oct. 4, East Hampton officials announced that the town had entered a partnership with CareONE Concierge to provide P.C.R. saliva testing for Covid-19 at the former Child Development Center of the Hamptons on Stephen Hand's Path.

In the letter to the town board that was obtained by The Star, Pamela Kennedy, Medivolve's senior adviser for government affairs, wrote that the company would end its contract 30 days from the date of the letter. "While we would have liked to continue to serve your community," Ms. Kennedy wrote, "due to business reasons we will be ending our contract with the town. All test results for samples collected through the end of our contract will be reported to both the town and patients in as timely a manner as possible." Medivolve will also explore relocation opportunities throughout Long Island, she wrote, "so that we can continue to provide testing services and job opportunities to your residents."

A spokesman for Medivolve told The Star on Oct. 13 that the company apologizes "for any delays our patients are experiencing with their test results." P.C.R. results are typically posted within two to three days, he said. "However, since mid-August, we have experienced longer delays" -- seven days or more for P.C.R. results -- "due to an increased volume of customers seeking testing likely due to the Delta variant. We are working with our lab to better cope with this larger volume and return to normal, and our lab has invested over $10 million in new equipment and software to expand its capabilities."

Some East Hampton residents have complained that Medivolve requires its customers to undergo three tests: P.C.R., antigen rapid testing, and antibody rapid testing. The spokesman said that this was to ensure maximum reliability of test results. "If individuals want only one or two of these tests because of time pressure to obtain results, such as a scheduled tourist destination or travel abroad requiring such test results, they are free to choose other providers," he said, "but we stand by our clinical decision to require all three as it is in the best interest of patient care and public health."

After the board voted to terminate its contract with Medivolve on Tuesday, Mr. Van Scoyoc said that "our interest is to make sure the community has access to quick and reliable tests, and we started running into problems with turnaround." Those problems persisted, he said, and "we found another entity that will provide free testing with a guarantee of 24-hour turnaround once the lab receives samples." The CareONE Concierge lab is in Garden City, he said, and the company has "huge capacity to expand." It is now conducting around 50 tests per day, he said.

"I do want to say that the service from Medivolve through a great deal of this pandemic has been good," Mr. Van Scoyoc said, adding that the problems arose more recently. "They've given various reasons for that, but in the end what really matters to me is making sure people have quick, reliable access."