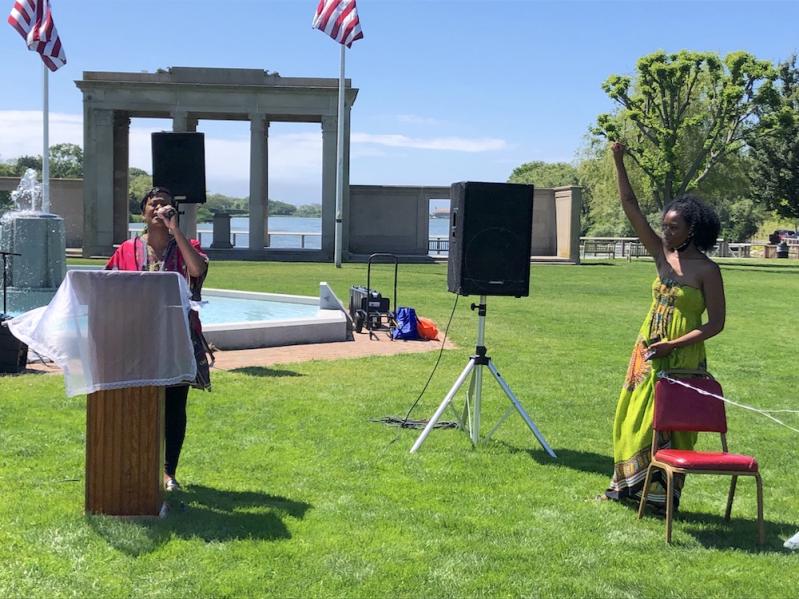 Tanisha Highsmith sang “Lift Every Voice and Sing” at a Juneteenth celebration in Southampton. Her daughter, Camryn Highsmith, was the emcee of the event, at right.
Christine Sampson
By Jennifer Landes

County Executive Steve Bellone said on Friday that he had signed executive orders to plan for a day of special observance for Juneteenth beginning next year and to extend the implicit bias training now being received in the police department to all county employees, and for it to be completed in one year.

"So that when we celebrate Juneteenth next year we will do so knowing that every employee who serves this county will have received this training." He said he would work to make the training available to all governments in Suffolk County.

"Juneteenth has risen in the national consciousness so quickly and has become an official state holiday, thanks to Governor Cuomo, and may soon become a national holiday."

Started as an observance mostly by the African-American community, he said it was important for all Americans because of what it represents, the end of slavery.

"It is important to remember that the end of slavery did not mean the end of racism," he said. "A central part of our history has been the struggle to undo the institutional and structural racism that has existed. We must recognize that this is a struggle that continues to this day."

The Juneteenth celebrations may include parades, festivals, symposiums, musical events, and prayer services with a focus on African-American freedom and achievement. The county's office of minority affairs will work with civic groups, faith-based groups, local governments, and others interested in creating celebrations throughout the county.

In other news, Mr. Bellone said the county continued to respond to complaints about social distancing violations at businesses in Suffolk and to educate those who are violating the rules into compliance. "We do understand that we came through a unique and unprecedented event and businesses are struggling to get back on their feet. We want them to reopen and not just survive, but thrive."

He reminded bars and restaurants that they were responsible for any activity that occurred in the area outside their businesses used for serving customers. "As we close down sections of the street, they are responsible for all activity in that space."

The new positive cases of Covid-19 were up from recent days to 54, just shy of the past week's high of 56 on June 12. This week's previous totals of new positive tests were in the 30s and 40s. Hospitalizations were down to 110, a number of significance for Mr. Bellone, who said it had been frustrating to see that number stuck at 125 for many days. "I would love to see that number get below 100," he said. "We'll look over the next few days and hopefully that downward trajectory will be continuing."

The number of intensive care unit patients also broke through a plateau, down by six to 29, which was the first time that total had been below 30 since March. Hospital capacity remains under the required 70 percent ceiling but is inching upward, with 67 percent of hospital beds taken and 60 percent of I.C.U. beds occupied. There was one Covid-19 related death and 21 hospital discharges of patients with the virus.