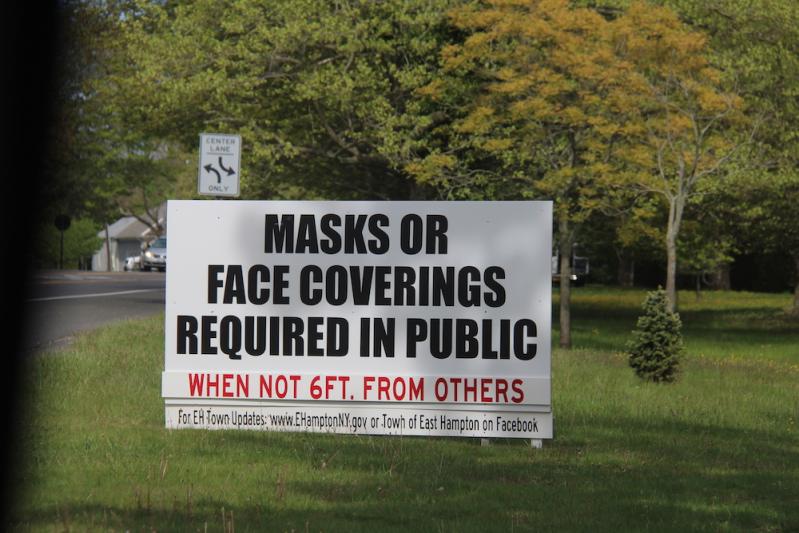 Signs informing people of the mask mandate may not be enough to get the word out about, some on the town board say. "We are talking about making sure people stay safe, they know what the safety issues are, what the rules are," Councilwoman Sylvia Overby said on Tuesday.
Durell Godfrey
By Christopher Walsh

Controlling the message was a topic of a sometimes-contentious discussion among the East Hampton Town Board on Tuesday as it considered spending up to $10,000 per month to retain a public relations firm into November.

The Business Recovery Group, convened by the town board in April to develop policies and guidelines for the phased reopening of commercial activity, asked the board to consider hiring a "seasoned communications organization" to help with communications related to health and safety amid the Covid-19 pandemic, Councilwoman Sylvia Overby said at the board's meeting. One way to aid that effort would be in a redesign of the town's website, which board members agreed is in order.

The town solicited proposals last month, Ms. Overby said, with a June 8 deadline. "We were fortunate to receive four excellent proposals," she said, and a committee was formed to interview three of the firms. The fourth, a sole proprietorship, was deemed too small "to grapple with some of the issues we needed in the 24-hour [news] cycle we are in."

The committee recommended BerlinRosen, a firm with offices in Manhattan, Los Angeles, and Washington, D.C. According to its website, BerlinRosen takes "a 360-degree approach to communications -- shaping narratives, crafting strategies, activating audiences, and elevating your story above all." A page on its site is dedicated to "How We Can Support You During COVID-19."

As often happens in the board's deliberations, Councilman Jeff Bragman was the lone dissenting voice. "I'm not that enthusiastic," he said, comparing the proposal to his previous suggestions that the town make a donation to food pantries and fund a Covid-19 testing site in Montauk, neither of which was acted upon. BerlinRosen, he said, wants to "generate consistent positive press coverage, and I feel like in the midst of a pandemic, when we're looking at other costs that were rather carefully scrutinized, when we were discussing the possibility of contributing to food pantries, which was not done, we didn't put our hands in our pockets for that. . . . When I look at the other expenses we've not chosen to make, I don't see this as a critical expense. I don't think we need to hire a public relations firm to generate positive press. Press coverage is going to come from what we do and say."

The Business Recovery Group, Ms. Overby said, is seeking "consistency in a message. . . . We are talking about making sure people stay safe, know what the safety issues are, what the rules are." Its members want to ensure that every communication "is consistent within town government, so that businesses are relaying the same information to their employees." Food pantries' funding, she said, is "a different issue."

"I think we've done a pretty good job" in communicating, Mr. Bragman insisted. "Most rules come from the governor. We've got protocols on opening into the next phase. I don't know if I want to spend $60,000 to make our messaging more consistent and seek to get better press coverage."

There have been inconsistencies, Ms. Overby replied. "We are talking about making sure people stay safe, they know what the safety issues are, what the rules are. It's important for us to keep moving forward for those that visit, that work here."

Committing taxpayers' money to things others are willing and able to fund would be inappropriate, Supervisor Peter Van Scoyoc said in reference to food pantries and Covid-19 testing sites. "We're not going to ask for a private donation to fund better communication with the public, but if you know someone, we'd be happy to have them pay for it as well," he said to Mr. Bragman. "Communication is always important." From social media, it is clear that some people are still confused as to allowable activities in the current, second phase of New York State's four-phase reopening plan. "There is a number of people in the public we still haven't reached," he said.

The discussion ended with expressions of support for the proposal from Mr. Bragman's four colleagues.

On Thursday, the board voted to allocate up to $60,000 to retain the services of BerlinRosen. Councilman Jeff Bragman cast the sole dissenting vote.