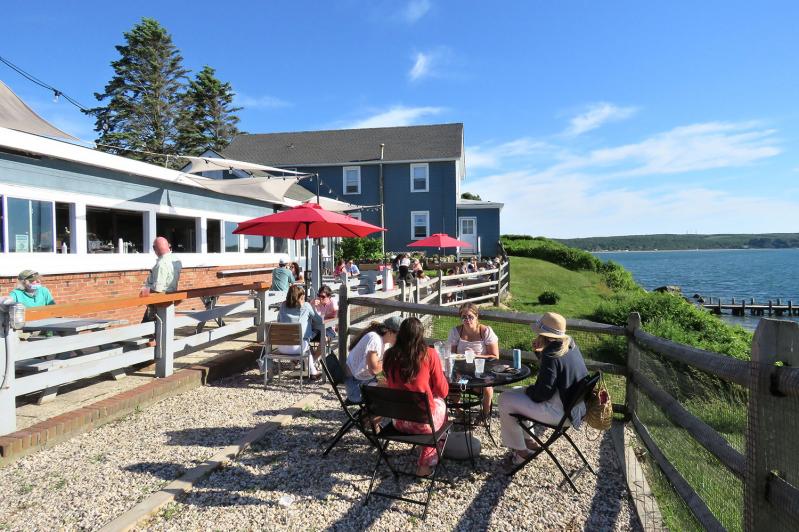 Patrons dining outside at the Montauket this summer. East Hampton Town is discussing legislation that would allow restaurants to move 100 percent of their indoor dining outside while the pandemic persists.
Jane Bimson
By Christopher Walsh

Temperatures are cooling and concern over the coronavirus persists as fall begins, but restaurants in the Town of East Hampton may have an opportunity to extend an unprecedented tourist season by continuing to offer as much as 100 percent of their seating capacity outside.

NancyLynn Thiele, an assistant town attorney, briefed the town board on Sept. 15 on draft legislation for a pilot program allowing restaurants to transfer the entirety of their legal seating capacity outdoors, under strict parameters and provided the designated outdoor space is on the same property.

The town code now allows up to 30 percent of seating to be moved outdoors provided an equivalent number is removed from an inside dining room, but restaurants, under an executive order issued pursuant to the March emergency declaration amid the emerging pandemic, have been able to transfer all of their indoor seating outside through an application to the fire marshal.

That provision, which has been continually renewed, is set to expire on Nov. 1. The draft legislation presented last week would extend restaurants' option to put up to 100 percent of seating outdoors. Ms. Thiele said that any special-permit program should include an expiration date or language stipulating a review prior to its renewal or discontinuation. The board could also make it a permanent amendment to the code.

To ensure social distancing, restaurants are now allowed only 50 percent of their capacity indoors.

Under the pilot program, the building inspector would issue a special permit in consultation with the fire marshal. The permit would allow service of food and beverages to seated patrons. It would not allow point-of-sale bars outside or outdoor food preparation. Service bars in an outdoor configuration, should the board allow them, would be subject to New York State Liquor Authority approval.

The pilot program, Ms. Thiele said, "would add additional flexibility for some of these restaurants so that, if it's a great day, more of their occupancy [could be] outside than inside." The reverse would also hold, depending on weather conditions, with approvable seating plans for either circumstance required "so that if code enforcement or fire marshals came on the site they would know which seating plan the establishment was working under."

Use of outdoor space would be limited to 8 a.m. to midnight, Ms. Thiele said, with live music only allowable with a valid music entertainment permit. Amplified music would be limited to between 1 and 9 p.m., with noise levels complying with the existing statute, which lowers acceptable decibel levels between 7 p.m. and 7 a.m. Outdoor lighting would have to be consistent with existing standards in the town code, with exceptions allowed only when expressly authorized by a special event permit. Outdoor heating devices must be compliant with the state Uniform Fire Prevention and Building Code, with the fire marshal's approval and their inclusion on a seating plan.

An outdoor dining area would have to be more than 100 feet from a residential structure and configured "such that noise and other effects generated would be reasonably screened from adjacent properties and compatible with existing and potential uses thereon," Ms. Thiele said.

A potential complication is the use of an establishment's currently approved parking spaces for dining, which would be allowable only if adequate alternatives existed. "If an applicant is interested in reconfiguring their property so that the parking is used for outdoor dining, perhaps it is a matter of going back to site plan," Ms. Thiele said.

The board identified several points of discussion, including the allowance of service bars and hours of operation. Councilwoman Kathee Burke-Gonzalez questioned whether 100 feet would be sufficient distance from residences. Supervisor Peter Van Scoyoc agreed. "I'm not sure we would extend this for pre-existing nonconforming businesses," which are prohibited from expansions of use, he added. "I think that would prevent the allowance of outdoor dining if they didn't already have it," he said, though Councilman David Lys wondered aloud if shifting dining outdoors would constitute an expansion.

Councilwoman Sylvia Overby registered her opposition to service bars outdoors, and questioned whether an establishment could remove approved landscaping to accommodate outdoor dining. "That's one reason to have this done by the building inspector," Ms. Thiele said. Landscaping can be a condition of site plan or zoning board of appeals approval. "That can't be changed in order to accommodate this special permit. The building inspector is the one who knows of those conditions."

The board was reviewing a first draft, Mr. Van Scoyoc emphasized, and the public would have an opportunity to comment on proposed legislation. There is "some interest in getting this in place" prior to the emergency order's Nov. 1 expiration, he said.

In East Hampton Village and Sag Harbor Village, the mayors issued executive orders in June to allow restaurants without existing outdoor dining to apply for permission to use public and private property to create temporary ones until Nov. 1. Prior to the Sept. 15 elections in East Hampton Village, the village board had been discussing extending the deadline to Dec. 1, and allowing the use of heaters.

After being elected mayor last week, East Hampton Mayor Jerry Larsen said he's hoping to do even more to help restaurants shore up business during the colder months. His ideas appear in a separate story in today's paper.

Sag Harbor Mayor Kathleen Mulcahy said she doesn't think there will be much clamoring to continue outdoor dining in the village beyond Nov. 1. "It's cold over here on the water, even with heaters," she said. But if restaurants want to extend past the executive order's cut-off date, "I expect we will entertain the proposals on a case by case basis," she said.