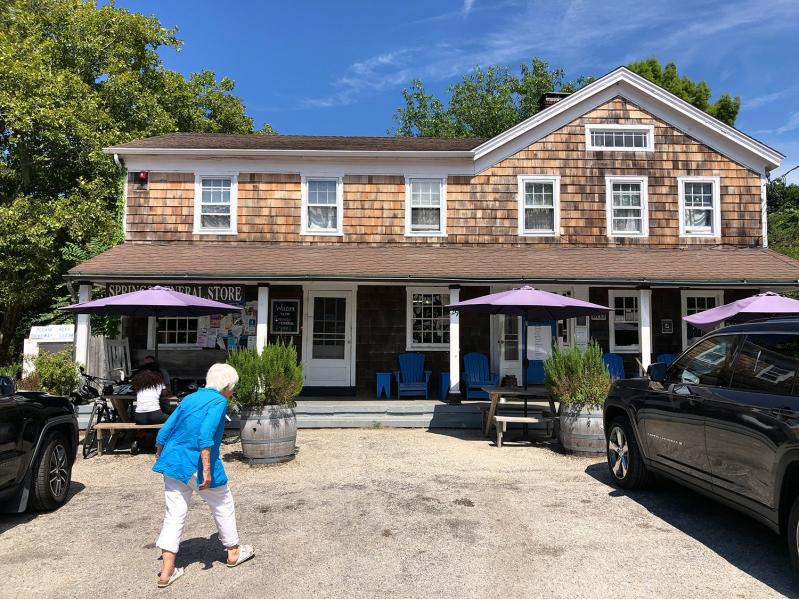 While the Springs General Store is in a historic district, there is no facade easement to prevent the new owners from adding a ramp for the disabled or making other changes to the facade.
Carissa Katz
By Christopher Gangemi

The new owners of the Springs General Store are eager to get to work converting a storage shed on the property into a tiny wine store, but questions about accessibility for the disabled and exactly what type of drinking would be allowed at the site have slowed the progress of their application before the East Hampton Town Planning Board.

Switching from renting kayaks to selling wine may not trigger the owners to add access for the disabled to the main store, which is a separate structure.

“My understanding of the A.D.A. law, we’re not suggesting any change to the building itself, so we’re not required to make any sort of A.D.A. ramp,” said John Bennett, an attorney, speaking for his son, Daniel Bennett, who is one of the four owners of Springs General Real Estate, L.L.C.

Nonetheless, the owners agreed to do so as an act of “good faith.” Similarly, they agreed to upgrade the septic system, which would cost them $110,000.

“We can’t afford that,” said John Bennett. Grant money that could cover 65 percent of the project may become available over the winter, and the board seemed satisfied to give the Bennetts an opportunity to apply for those grants.

That topic tabled, the board dug into the accessibility issues. After the June planning board meeting, the Bennetts submitted a parking plan that included a handicapped spot directly in front of the store. It would connect to an 18-foot-long ramp that would lead to an entrance on the side, not the front, of the building.

The Bennetts don’t want to add an accessibility ramp to the front of the historic facade, which is largely unchanged from when it was built in 1844. However, it is not illegal to do so, said Eric Schantz, the town’s assistant planning director. “While this is in a historic district, there is not an actual facade easement.”

Both David Browne, the chief fire marshall for East Hampton Town, and Glenn Hall, the chairman of the East Hampton Town and Village Disabilities Advisory Board, found the plan unacceptable.

“The planner for the General Store stated they do not want to disturb the ‘historic’ front porch,” wrote Mr. Browne in his determination. “Title III specifically states barriers shall be removed in historic buildings; I find that to offer entry only into the rear or side door to be unacceptable.”

Mr. Hall, in a letter to the board, agreed. “The main entrance to the Springs General Store must be A.D.A. compliant.”

Considering those comments, Mr. Schantz recommended the Bennetts create an alternate design. The design, he said, would also have to be vetted by the architectural review board, and he said they should present it there before the planning board moved ahead with the site plan application, to avoid delay.

But the application had already been delayed for months while the Bennetts waited for the disabilities advisory board’s comments. He complained that the two ramps recommended by the board, are “pushing this project farther out of the scope from what we originally intended: a minor change of use with no increase in floor area.”

“For the purpose of comity, we’re willing to do something, but certainly not something that’s going to affect the historic fabric of that structure.”

“A.D.A. access cannot be around the corner and out the back,” said Samuel Kramer, the chairman of the planning board. “I don’t want to see the architectural integrity of this building impacted, but the A.D.A. is a law that we’re charged with enforcing.”

Before the next meeting, lawyers will decide whether A.D.A. access to the main store is required.

If the board was focused on parking and access, “The residents of Springs’ biggest concern is the drinking on premises,” said Sharon McCobb, a board member and former owner of the store.

Even though it wasn’t a public hearing, a man spoke up, asking that the store be forced to cancel its state liquor license application, lest it supersede restrictions the town wishes to impose on the site. His concerns were echoed by Randy Parsons, a board member. “The state agency is more powerful,” Mr. Parsons said.

John Bennett said people go there now, buy a beer, and drink it out on a picnic table. “We want to legalize it, but minimize it,” he said. Highlighting the community anxieties, he said people have approached his son Daniel, who also owns Doubles in Amagansett Square, to express their fears.

But Daniel Bennett said a club is far from his vision, which is more French country grocery store than Surf Lodge.

“You have a beloved historical resource that’s essential to this community and we don’t think that you’re going to deliberately go in and muck it up,” said Mr. Kramer, “but you’re not going to own it forever.” He indicated that smartly-worded covenants and restrictions could clear up most issues.

“I drive past some of these previously sleepy places in Montauk and I say to myself ‘How the hell did that happen? The neighbors must be up in arms,’ “ said John Bennett.  “We don’t want to be on that list.”