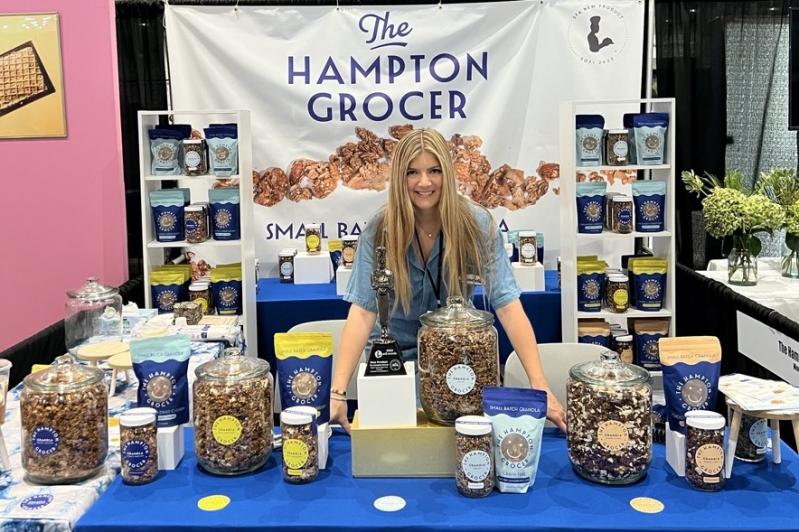 Samantha Sherman has taken a few Covid pivots to arrive at a new career baking granola and winning an award from the Summer Fancy Food Show, which she attended recently at the Javits Center.
Andrew Perlstein
By Jennifer Landes

The East End is full of stories of Covid-related pivots. Samantha Sherman's move to Montauk to start a health coaching service, then a shopping service, was one such pivot. But then, she pivoted again.

The Hampton Grocer is still the name of her company, but these days she's too busy to shop -- for herself or anyone else. That is because her company has become synonymous with granola, lots and lots of granola. And now, it's also prize-winning granola.

Ms. Sherman, who exhibited at the Summer Fancy Food Show at the Javits Center from June 12 to 14, won the show's best new product award in the cereals and granola category for her new grain-free variety. Full of nuts and seeds -- "sweet yet spiced and just salty enough" -- she said it was inspired by the rising prices of oats.

It is offered along with monthly special varieties and the standing flavors of chocolate coconut, lemon poppy blueberry, savory, and the original cinnamon dried cherry variety she began giving out as a thank-you gift to her shopping clients.

Baking and food marketing isn't a huge departure from Ms. Sherman's prior career in the food services industry. "I grew up in New Jersey, and I started baking and watching the Food Network as a young kid." In high school her first job was assisting the pastry chef in an Italian restaurant. "I always had a passion for baking."

She went to school for hospitality administration at Boston University and found herself interning for Marcy Blum, a well-known luxury wedding planner, and ended up freelancing with her for many years. She also found gigs at the front of the house of O Ya, a famed restaurant in Boston, and then Otto in New York, once part of Mario Batali and Joe Bastianich's empire of restaurants and since closed. When the owners of O Ya, Tim and Nancy Cushman, opened three restaurants in New York, they asked her to join their management team, serving as director of events for all three restaurants: Covina, Park South, and the New York City outpost of O Ya. She planned more than 500 events a year, with multiple events happening at the same time in the different spaces.

Five years passed before the Covid shutdowns. Since she lived within walking distance of the restaurants, Mr. Cushman asked her to go in and retrieve the paperwork needed to furlough all of the employees so they could collect unemployment. "Basically, I had to lay off 170 or so of my coworkers. And that was kind of the beginning of the end."

But, she said, that first Monday of the shutdown was also a new beginning for her. As she and Andrew Perlstein, her fiance at the time and now husband, thought about what to do next in their small studio with two dogs, they decided to spend the time in Montauk with his parents. The restaurants she was working with were located in a hotel; she knew that the hotel's owners were likely to use the pandemic as way to terminate their contract, and that events weren't likely to be a booming business for a while. She began thinking about alternative careers.

"I've been working in restaurants and hospitality and events for my entire life. So, I was going 150 miles an hour for all of my career." Taking a slower approach to the field she still loved, she enrolled in the six-month course offered by the Institute of Integrative Nutrition, an online health coaching platform. "I loved it. I was learning so much."

She wasn't going to finish until September and she didn't know anyone out east. Realizing she was going to need clients once she received her certificate, she began thinking about offering a service that would get her out of the house and meeting people.

The Hampton Grocer was born out of this quest. With many disinclined to shop, she figured, "I'm healthy. I can wear a mask and gloves, go food shopping for people, and come up with locally focused recipes."

As part of the idea, she thought about offering gift baskets of local food products: jams, honey, and similar items. Through word of mouth and Instagram, she began to network and find clients. The business was taking off, "but I wasn't selling anything that was my own." That's when Janet Perlstein, her mother-in-law, offered her own granola recipe, which became Ms. Sherman's original flavor.

"We made it together on Mother's Day." Ms. Perlstein told her, "I've been making this forever. You've had it a million times. It's always in our cupboard. I've been giving it to people." She had tried to start her own business many years ago, but it was too overwhelming. She suggested, "Why don't you have it be your signature item that you gift to clients, and maybe you can sell it, see how it goes?"

Ms. Sherman did, including it in her gift baskets for clients, who asked for more. Then, she moved on to farmers markets and by the end of the summer, she had a loyal following and a second flavor.

Her website was built for her local delivery service, but she figured out how to run shipping out of it and began sending out online orders. She knew the owner of Tt's Mexican restaurant in Montauk and used his kitchen when she began, and then moved on to a kitchen in Brooklyn as she scaled up her operations. The commute became too much, so last April she started baking at the Stony Brook University Food Business Incubator in Calverton. When she began, she was baking 100 pounds of granola a week, but now it is up to 1,000 pounds, still made in small batches. Her first kitchen in Calverton was shared. Now, she's in her own space and has invested the money she made into equipment "to grow and grow and grow."

And she has, collaborating with Amber Waves in Amagansett to bake its granola recipe for its store and on custom blends. She sells at other local retail outlets and through Williams Sonoma's website, continues to make the farmers market circuit, and has brisk business on her website. She has become so busy at times that she has had to recruit her husband and family -- his and hers -- to help out. The night before she spoke for this story, they had been in the Calverton kitchen making 100 extra pounds of granola to last them through their orders for the week and the food show, which her parents were helping her with. In addition to his own work, Mr. Perlstein keeps an eye on the web account that manages her store, which has its own screen on his desk, once texting her to find out why the farmer's market business was slow that day.

"I'm very lucky to have such an amazing support system, family that actually is excited to work with me. . . it's definitely a family affair, and we love it."