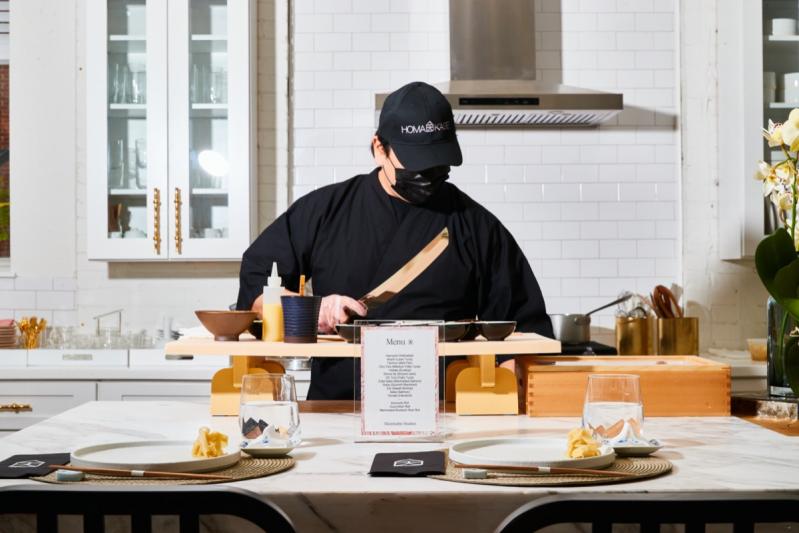 With a new season on our doorstep, restaurants are gearing up for what they hope to be a profitable summer both inside and off-premises. There are several options from the freshly minted to the more familiar to try this weekend or on a future date. Those just returning from a long winter's nap can find other openings and menu information in previous week's columns.

O, That's Good
At O by Kissaki, our reviewer noted last year "the outstanding food, its sleek new room, and excellent service." His only question was whether it would be able to reemerge from the long winters of the East End.

It has and is back with a new menu featuring several inventive twists on traditional Japanese food and an almost steakhouse-style mini-menu of Wagyu beef, salmon, and bluefin tuna to replace the robata skewers of last year. These are served with sides like wasabi mashed potatoes, and tofu creamed spinach.

The menu was conceived by Chris Jaeckle, the chef, along with Garry Kanter, the owner, and Mark Garcia, the sushi chef.

Sushi returns with a selection of futomaki rolls with unique combinations like the ebi-hamachi futomaki of yellowtail tartare, shrimp tempura, cucumber, avocado, cilantro, and jalapeno. Nigiri pieces feature a choice of two kinds of fatty tuna along with a lean bluefin tuna, yellowtail, Faroe Island salmon, shrimp, and others. They have unusual toppings such as wasabi relish, oshinko, crispy scales, and even truffle oil.

There is a pasta and rice section that continues the exploration of the unexpected along with a variety of appetizers including salads, a choice of tuna or scallop crudos, and lardo and uni on a small cake of crispy rice.

The restaurant opens at 5:30 p.m. every day but Tuesday and closes at 9 during the week and 10 on weekends. It takes reservations on Resy as well as orders for pickup and delivery.

In Bridge and After
Bridgehampton, which had sidestepped the Dopo family of restaurants in East Hampton, Sag Harbor, and Southampton, now has one to call its own. Dopo il Ponte or "after the bridge" is now open in the old World Pie space. It will feature similar dishes to its sister establishments, with a focus on the site's pizza oven from which sourdough pies and homemade flatbread will emanate.

Rumor has it that the restaurant will, in the tradition of its former occupant, offer a friendlier price point than its other branches. We look forward to hearing more.

Little Ruby's Opens
Ruschmeyer's has found itself down under with its latest addition to the Montauk restaurant scene. Little Ruby's Cafe, an extension of a mini-chain of restaurants in Manhattan, is opening in Montauk this weekend. The owner, Nick Mathers, who hails from Australia, also owns a number of spots in Los Angeles.

It will have an all-day cafe format with a menu that features avocado and vegemite toast, bowls, and eggs, and BLATs with breakfast, more bowls and salads at lunch and dinner, along with pizza and local seafood options.

T for Two, or More
T Bar, the East End outpost of the Upper East Side steakhouse near the train station in Southampton, is open for the season. The menu concentrates on contemporary American cuisine served in a comfortable setting both inside and out.

Hours are Wednesday to Sunday from 5 p.m. Closing times vary.

At the bar there are seasonal margaritas on draft, refreshing frozen Margaritas with frisky names such as spicy strawberry and Miami Vice, and bottled cocktails to keep the party going at home or elsewhere.

Dinner will be served Wednesday to Sunday from 4 to 10 p.m. weekdays and 11 p.m. on weekends. A daily happy hour lasts from 4 to 6 p.m. with $1 oysters and $10 margaritas. The restaurant promises seasonal menus are coming soon.

The Bridgehampton restaurant is open Tuesday through Thursday, 5 to 9 p.m. and Friday through Sunday until 10 p.m. Happy Hour lasts from 5 to 6:30 pm. The restaurant also offers catering options.

My Omakase Hero
On Saturday, Hero Beach Club will bring Ten Homakase to Montauk to offer a private omakase meal to the club's guests.

For $200 per head, premium sushi will be served beachside by Daniel Kim with an expandable nigiri course menu and upgrade options such as uni, wagyu, plus toro and sake tastings. Appetizers, salads, and dessert can be added to the menu as well.

Ten Homakase will be available to cater meals on the South Fork at home or other locations this summer.

Road Trips for Highway
The team behind Highway Restaurant and Bar in East Hampton and Main Street Tavern in Amagansett is launching Autostrada Catering and Retail this weekend.

Led by their Michelin-awarded chef, Anand Sastry, they will offer catering for large events like weddings and smaller, intimate dinner parties. As the name suggests, the focus will be on Italian and Mediterranean dishes served family style. Entrees such as whole roasted branzino and bone-in dry-aged ribeye join vegetable sides and salads like Sicilian cauliflower with capers, olive oil, and parsley; arugula salad with shaved fennel, red onion, and Valencia orange, and prosciutto and melon.

Included in the options is a mobile wood-fired oven that churns out pizzas onsite like a crispy Roman-style-square version, the Aragosta with spicy lobster and San Marzano tomato, and the Vongole with littleneck clams, garlic, parsley, and lemon. Special vegetarian, vegan, and gluten-free menus are also offered.

Its cocktail bars have menus featuring margaritas, negronis, mimosas, and other festive drinks. There are also packages for champagne, single-malt Scotch, and bourbon. More complex craft cocktails menus are also available with a local and international list of wine and beer.

All catering orders require at least 72 hours' notice. Further information about menus and booking orders is on the Autostrada Hamptons website.

In the fall, the retail operation, which will be run out of the old Breadzilla space, will offer grab-and-go items from its own menu as well as a few classics from the beloved bakery and market, which closed last year.

With Pride
Riverhead's RGNY winery has appointed Jonathan G. Bomberg as its head winemaker. According to the winery, they will help "develop products of low ecological impact, ensuring that quality and innovation are at the forefront of all RGNY experiences."

The winery is also celebrating Pride Month beginning Wednesday with a Pride Blooms party from 6 to 9 p.m.

The event will unveil the winery's Pride Blooms floral installation in its tasting room, designed by Hometown Flower Company. Tickets are $90 and all proceeds will go to help North Fork Women and the Ali Forney Center. They will also benefit from 20 percent of the sales of the winery's limited edition Rainbow Rose and pride T-shirts.

Tickets include a D.I.Y. flower crown bar from Hometown Flower, a portrait session with Leanne Gelish, a glass of RGNY Scielo wine, light bites from By Hand Catering, rainbow cookies, doughnuts from No Fo Do Co, a glitter make up bar, and music.

This column has changed from its original and print versions to correct Jonathan Bromberg's pronoun to they and an error in a press release regarding Rita Cantina. The restaurant does not offer wine during its happy hour.