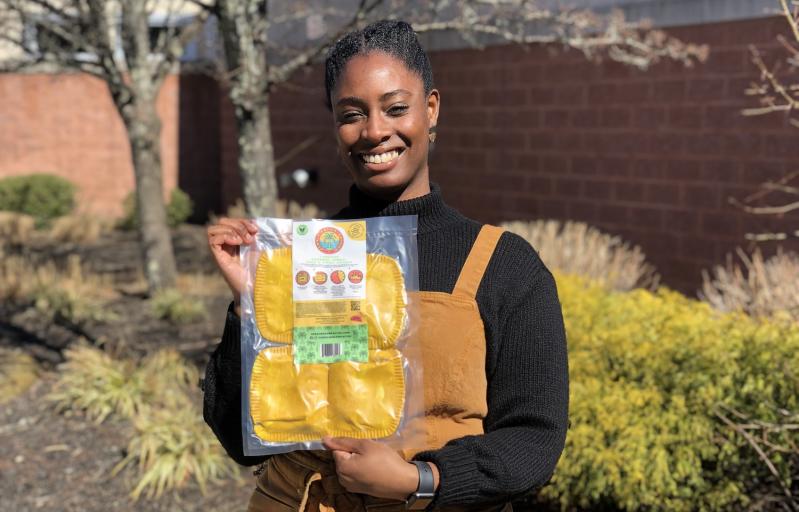 For Alayah Hewie, as it was for so many food business entrepreneurs, March 2020 was a turning point.

When the pandemic hit, she had been busy testing recipes for Jamaican patties with hopes of launching her Rena's Dream Patties brand in a bigger way. "I've always loved Jamaican patties," Ms. Hewie said. "I think they're the perfect food."

Instead of quashing her plans, the pandemic motivated her to move ahead with them in earnest. Before that, she said, "I wasn't really comfortable selling, but for some reason Covid gave me the energy to start a Square website." That allowed her to take credit card payments. She began slowly, selling three flavors of frozen patties in boxes of four and six through her Instagram account, turning out about 60 a week.

She used a hand-crank pie and turnover machine, "and I had to work hours in the kitchen to get 60."

By last summer she was making Rena's Dream Patties in batches of 300 and selling them at farmers markets in East Hampton (opening for the season on Sunday), Springs, and Riverhead and at a handful of retail locations including Schiavoni's Market in Sag Harbor and Serene Green in Noyac.

She offers six different fillings now -- curry coconut kale and sweet potato, chickpea and potato curry, curry chicken, spicy beef, mild beef, and cheeseburger. Each utilizes the same flakey pastry crust and draws upon the savory and piquant traditions of Jamaican cuisine, with an East End twist. "I wanted to utilize the local food system here and support local farms. I try to source as locally and sustainably as possible."

Ms. Hewie lives in Bridgehampton, but grew up in East Hampton. The name of her business, and, really, the patties themselves, are a tribute to her late grandmother Rena Hewie Stoutt, who in 2011 opened Jamaican Specialties on North Main Street in East Hampton. The shop brought Caribbean pantry and grocery items as well as the spice-infused flavors of traditional Jamaican cuisine to loyal customers across the South Fork for three years.

Ms. Stoutt, who was born in Jamaica, worked in banking but had long dreamed of opening her own market or restaurant. When she did so at age 63, Ms. Hewie was there to help, working alongside her until Ms. Stoutt fell ill and died in 2014.

After her grandmother died, Ms. Hewie wanted to continue her legacy, but wasn't quite sure how at first. Though she has worked around food in one way or another for most of her adult life, she admitted that she wasn't much of a cook when she was younger. "I had a grandmother who cooked so well and my mom cooked every single night for me and my brothers and my sister. I never needed to learn."

Then, while working as a cafe associate at the East End Food Institute's South Fork Kitchen at Stony Brook University's Southampton campus, she began to experiment with patty recipes.

At Jamaican Specialties, "We used to sell a lot of Jamaican patties," Ms. Hewie recalled. "We were buying them from a major distributor based in the Bronx. . . . I wanted a patty that was healthy and more natural and fresh. I didn't want to use enriched flour."

The institute offered commercial kitchen space to other startup food companies, and the people who ran them were generous with their advice, Ms. Hewie said. Her experiments with the pastry portion of the patties led her to a recipe that is dairy-free while still being delicate and flaky, so the vegetable patties are also vegan.

When she was ready to grow the business, she connected with Stony Brook University's Food Business Incubator in Calverton, which offers food startups like hers help with scaling, packaging, labeling, marketing, and distributing their products. "Everything just lined up and I just had no excuse but to try."

The program has a shared-use commercial manufacturing kitchen, plus space for readying the products for market. "I loved how it had a long-term plan for startups," Ms. Hewie said while showing a visitor around the space early this month. "You can kind of grow within the building."

The Covid-19 pandemic pushed many small food producers like Ms. Hewie to turn side gigs and passion projects into bigger ventures. Before Covid, there were 20 food businesses working out of the facility, today there are 73, said Yvonne Schultz, the incubator's manager.

"There are so many companies here at so many different levels," Ms. Hewie said. "I learn a lot from the other companies. It's almost like a family."

Rena's Dream Patties remains a side gig for Ms. Hewie. She also works as a catering assistant at Stony Brook Southampton Hospital, under the dietitian. Catering assistants help see that the patients get fed and that the things they're eating while in the hospital square with their dietary restrictions. "I've always been drawn to food. If it doesn't have anything to do with food, I lose interest."

But if she could see Ms. Hewie turning out these delicious Jamaican treats with recipes she developed herself, "My grandmother would have been surprised." It's fair to say, she would also have been very proud.