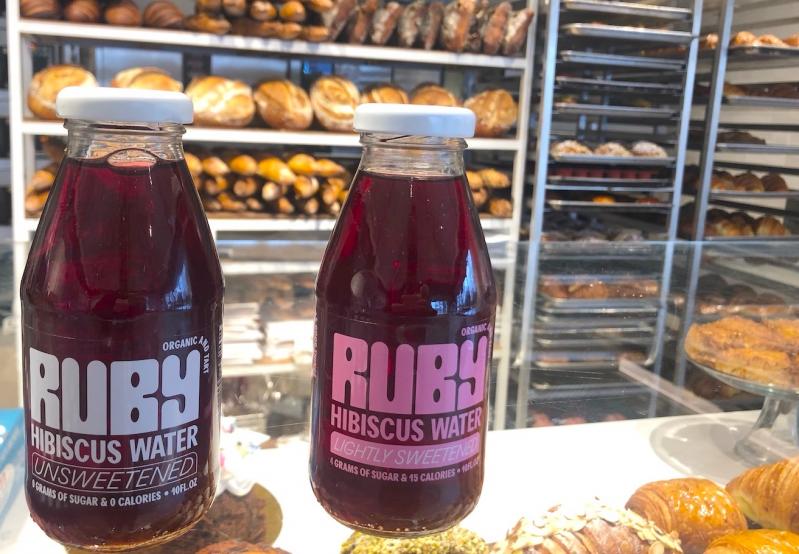 When Noah Wunsch started brewing hibiscus flower-infused water, he didn't set out to make it marketable as a business. He was simply thirsty for something that didn't have a lot of sugar, which had begun to slow him down as he aged.

Fast forward about two-and-a-half years, and Mr. Wunsch formally released Ruby, his own take on hibiscus water, this week at Carissa's Bakery in East Hampton. He hopes it will be the first of many East End spots to carry his tart, easygoing drink.

"For me, it solved a problem," said Mr. Wunsch, who grew up a summer resident of East Hampton and whose family lives here now. "I was experiencing sugar crashes and I thought, 'This is insane. I'm reliant on this substance . . . and it's not healthy.' So, I started looking for ways to satisfy that sugar craving."

The hibiscus joins nasturtiums, dandelions, honeysuckle, squash blossoms, purslane, and other edible flowers with health benefits. It is known for antioxidants, electrolytes, and a bit of Vitamin C. In 2019, the Journal of Advanced Pharmaceutical Technology and Research published a study of the effects of the Hibiscus sabdariffa plant on hypertension, finding that drinking two cups of hibiscus tea daily is "effective in managing blood pressure in stage one hypertension along with lifestyle and dietary modification."

"Looking at the better-for-you beverage market, I found these drinks have a ton of benefits that are great but also have a lot of sugar in them that counters the benefits," Mr. Wunsch said.

He played around with different blends, experimenting with hibiscus strains from Hawaii, China, Fiji, Mauritius, Madagascar, and India, and trying out various hot and cold-brewing methods. He began sharing it with friends, who would "come back and ask me to make it for them in bigger batches." That was the indicator that it had potential. He called it Ruby because of its red color "but also, it felt friendly."

Mr. Wunsch ultimately created two varieties, a no-sugar version with hints of green apple, cranberry, cherry, and pomegranate, and a version with a touch of cane sugar along with notes of berry, Fuji apple, and pomegranate. It also mixes well with vodka, mezcal, and tequila, and acts as a palate cleanser with food. Mr. Wunsch likes to drink it after he has coffee.

Part of Ruby's charm is the whimsical cast of characters who live in what he calls the "Rubyverse" -- friendly little gnomes and other smiling creatures, drawn by an artist named Sharmila Banerjee. Mr. Wunsch also shares a weekly email newsletter "to let people into the brand to show them what's inspiring us." A 12-pack of 10-ounce bottles is $45. More information is online at ruby.fun.

Mr. Wunsch, 32, has a background in art, creative writing, and startup technology and graduated from the New School in New York City in 2011. He is now putting his efforts into Ruby full time.

"My goal is to go back to that conversation in better-for-you beverages. We are in an obesity epidemic in America," he said. "On an annual basis, medical bills associated with obesity issues are over $200 billion. The key driver of overconsumption of sugar is sugary beverages. We're trying to change the narrative that tart can be fun."