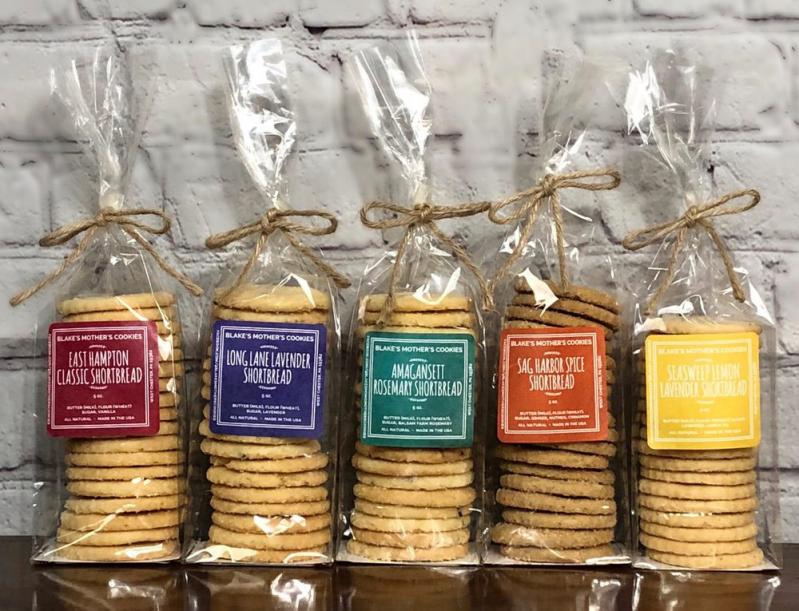 Originally just rosemary-flavored, Blake’s Mother’s Cookies have branched out into spice, lavender, classic, and Seasweep, which is flavored with lemon. The cellophane bags are compostable.
By Isabel Carmichael

Classic English shortbread is one of those acquired tastes. Some people find the cookies cloyingly sweet, a caloric bomb of sugar and butter; others delight in their crumbly density.

Loraine Houston, despite having “had a rosemary shortbread cookie a year or two before I started making them, and thought I’d never tasted anything more delicious,” was in the former camp, at least until she determined to produce a less sweet, less dense version, just for her own enjoyment. She Googled a recipe, and that was the start of what has now become Blake’s Mother’s Cookies.

Ms. Houston is no amateur in the kitchen. A former chef who attended La Varenne, a famous cooking school in Paris, and then cooked in restaurants and for private clients on the island of St. Thomas for 20 years, she now lives in Chester Springs, Pa. She has been a part-time resident of Amagansett from childhood.

In the summer of 2016, the son whose name is on the package was working at Balsam Farms on Town Lane in Amagansett. Blake took his mother’s shortbread cookies, baked that summer at South Fork Kitchens, to work to share, and right away everyone wanted more.

The chef refuses to call herself a baker. She is, rather, a “savory cook,” she said. Take the shortbread: “I don’t like them dense or too sweet, so I changed it up a bit, added more butter, whipped the hell out of it,” and didn’t compress the dough as much, she explained.

For a time she produced the shortbread in a small 12-by-16-foot incubator kitchen, baking 500 packs of cookies each week and driving them up herself from Pennsylvania to Amagansett, where they were sold at Balsam, Cavaniola’s, Stuart’s, and Amber Waves. Then a friend who was making “iSwiches” (gourmet ice cream sandwiches) bought a 3,000-square-foot building, gutted it, and put in a custom manufacturing kitchen, which she shares with Ms. Houston, another baker, another ice cream maker, and a nutritional snack food maker.

During the holidays, Blake’s Mother’s Cookies are sold in short bites, or minis, in reusable cotton gift bags with jolly holiday images on them. The bigger cookies — biscuits, the British would call them — are now being sold in compostable cellophane up and down the East Coast: in New York State, New Jersey, Pennsylvania, Delaware, Connecticut, and, surprise!, at the New York Botanical Garden. Pretty soon both the bites and the biscuits will be available on Amazon.