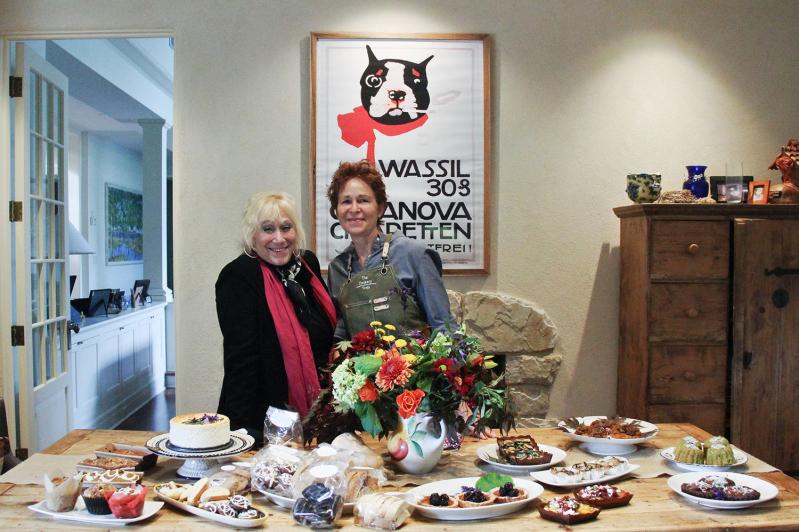 The Cookery, a partnership formed by Cynthia Sestito and Trudy Craney this summer, has been so well received at farmers markets that they are looking for a storefront from which to sell their delicacies.
By Isabel Carmichael

Twelve-plus years after they first met, an experienced restaurateur and an Emmy and Grammy Award-winning soprano have embarked upon a collaboration that was so well received this summer at the Springs, East Hampton, and Sag Harbor farmers markets that they're now looking for a storefront. Their business, the Cookery, has only been open since June, but it's already turned out hundreds and hundreds of homemade delicacies, from pignoli-rosemary-lemon biscotti to savory lunch tarts, and acquired an impressive website, thecookerybycynandtrudy.com, as well.

The restaurateur, Cynthia Sestito, a dress designer in a former life, gave it up in the mid-1980s to become a chef, and eventually opened a restaurant in Sag Harbor called Webb City where Tutto Il Giorno is now. On opening night, she recalled recently, there was an expectant queue all down the block. She jumped into the business headlong from there, owning five establishments of her own and opening nine for clients -- securing the proper permits, hiring the staff, creating the menus, and doing all of it while cooking for private parties (Jay-Z and Beyonce among them). She's been featured on "Top Chef" and on the Netflix show "Cooking With Cannabis," and has a cannabis cookbook coming out next spring.

The soprano, Trudy Craney, met the restaurateur through Match.com, though not directly. Ms. Sestito was looking through the site on behalf of a close friend, a widower, and spotted a head shot of a woman in her 40s whose husband had died. "I think this is the one for you," she told her friend, Allan Feldman. And she was right: Ms. Craney, who also teaches singing (on Zoom, now) and Mr. Feldman were married, and the two women have been friends ever since.

Like Ms. Sestito, who learned to cook from her mother, Ms. Craney would watch her family cooking together as a child in Brooklyn, especially her Italian grandmother, whose ricotta cheesecake she's been making for 30 years. As a professional cook, her partner was qualified to use the East End Institute's South Fork Kitchens on the Stony Brook Southampton campus, but Ms. Craney had to take an online course under the auspices of the U.S. National Restaurant Association that taught a broad overview of food preparation and safety. The license she earned is good for three years.

Credentials in hand,  she set about testing recipes, even finding a source of hand-scooped ricotta in New Jersey for her cheesecake. Ms. Sestito, meanwhile, mills her own flour from nuts and seeds. Between the two of them, all sorts of treats, from gluten-free rosemary-ginger-lemon muffins to delectable desserts, can be picked up on weekends at the farmers markets in Sag Harbor (Saturdays) or East Hampton (Sundays), or ordered online.

"As horrible as these times and Covid are," said Ms. Sostito, "they have forced Trudy and me to be creative and have inspired us to start a new, viable business, one that brings comfort in a most basic way to us and to people in the same position -- and that's love and the warmth of food."