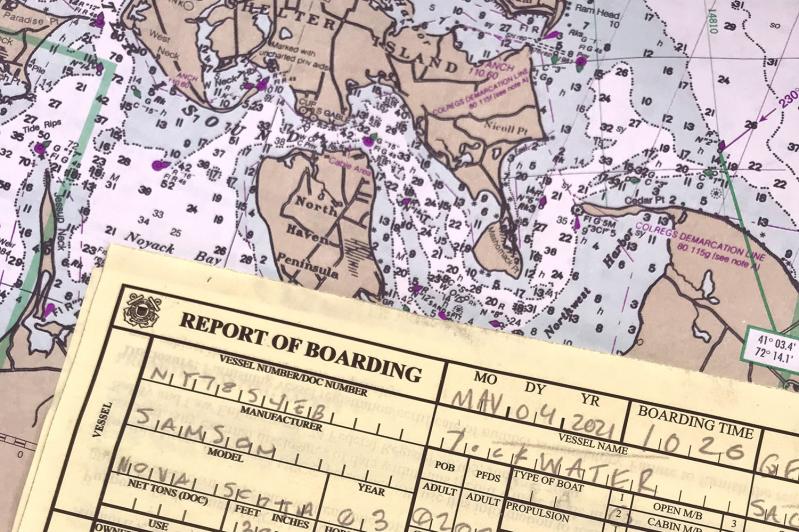 It's been a very long time since I have been pulled over by the police for a possible roadway infraction. Despite a lead-laden, size 16 right foot, I've received only one speeding ticket in my life. Not bad, I think, for over 40 years behind the wheel.

So, it was a bit of a surprise that I was stopped on the water last Tuesday morning by the Coast Guard near the Cedar Point lighthouse by the entrance to Gardiner's Bay while piloting my boat to check on my lobster traps. I know I wasn't speeding, as my boat plows along at a sluggish 13 knots, but I made an immediate stop when I saw the telltale flashing blue lights of the patrol boat that took course directly toward my bow.

"Have you been boarded in the past year for a safety inspection?" one of the four guardsmen bellowed to me while I stood on the stern deck. My simple answer was "no." In less than a minute, the high-speed boat, captained by Senior Chief Petty Officer William Harris, a boatswain's mate and the officer in charge of Coast Guard Station in Montauk, dropped two of his officers aboard my starboard side to conduct their inspection and a check of my paperwork.

Founded in 1790, the Coast Guard wears a lot of hats. It's a maritime, military, multimission service unique among the United States military branches for having a maritime law enforcement mission with jurisdiction in both domestic and international waters. It operates under the Department of Homeland Security during peacetime, which can be transferred to the Department of the Navy by the president at any time, or by Congress during times of war. Needless to say, the Coast Guard is serious and is not to be taken lightly.

Also known to those along the docks as Coasties, the unit has over 40,000 active-duty personnel, as well as a similar number of auxiliarists and civilian personnel. As one of the country's six uniformed services, the Coast Guard motto is Semper Paratus -- Always Ready.

Thankfully, I was ready for their boarding. I was not cited for any violations, but I was advised to keep my life ring and rope in an open space so that it can be more easily deployed in an emergency. Very sound advice. I was also told that while it's okay to keep old flares on board, they should be properly marked and that they usually expire after three years. Another good reminder.

The officers conducting the inspection were extremely well-versed on all safety protocols and were exceedingly polite. It felt reassuring to have them aboard to ensure I had all I need to be safe on the water.

The inspection lasted about 15 minutes and I received a copy of the report. I was advised to hold onto the paper, as it serves as proof of my inspection if I am asked to be boarded again in the next 12 months.

After expressing my appreciation for their time and service, Harris and his team sped off to the west. I assume they would do a similar check on some other unsuspecting boats. As a reminder, and before the Coasties sidle up to your boat, I would advise everyone to refresh themselves on what is required on your respective crafts at the Coast Guard web page, bit.ly/3bgLmQw. Better to be safe than sorry, especially when on the water. Semper Paratus, indeed.

As for the fishing scene, it has gained significant momentum all the way from the Shinnecock Canal to Montauk. I even got in on the action on Saturday morning by landing a Peconic Bay hat trick: porgies, bluefish, and a keeper striped bass. The porgy fishing in particular, just west of Jessup's Neck, was as intense as I've ever seen, with fish broaching the three-pound mark.

"The fishing has really been terrific of late," agreed Ken Morse at Tight Lines Tackle in Sag Harbor. "Porgies have been outstanding, and more bluefish and striped bass have shown up."

"It's a bluefish bonanza with lots of big fish roaming around many areas from shore, including near Accabonac Harbor, Gerard Drive, and Louse Point," said Harvey Bennett at the Tackle Shop in Amagansett on Sunday evening, while he was in the process of smoking several of the oily-fleshed fish chips that he caught the day before over hickory. For those in the know, smoked bluefish has few rivals on the taste scale.

Bennett added that squid have shown up in nice quantities at the local docks and advised those looking to enjoy a meal of fried calamari to get out soon, as the voracious packs of bluefish are likely to quickly scatter the schools of cephalopods. "Bluefish love squid as much as humans do," Bennett said.

The veteran tackle proprietor also said that with lilacs now in full bloom, weakfish, also known as sea trout, have shown up in areas to the west. "And don't forget the porgies," he noted. "There are running large in both size and quantities in Noyac and Peconic Bay."

Over at Mrs. Sam's Bait and Tackle in East Hampton, the owner, Sebastian Gorgone, was grinning from ear to ear behind the counter on Monday recounting how good the fishing is. "Oh man, the big bluefish are here big time," he said. "Gerard Drive and areas working south towards Napeague have been the hot spots on plugs and metal lures. It's been crazy."

Bluefish and small striped bass have made an appearance in Montauk, but most of the angler attention focused on fluke, which opened for the season last week. "The fishing is off to a decent start," said Capt. Mark Ryckman of the Montauk Star, a full-day open boat that sails out of Star Island Marina. "As the waters warm up, it will get even better." Ryckman estimated his fares landed over 150 shorts on Saturday's trip, with a fair number of keepers up to seven pounds in the mix.

Over the winter, Ryckman sold his old boat and purchased a sleek 85-foot Lydia, a classic party boat-style that was originally built in Stuart, Fla. "She rides like a brand-new Cadillac and drifts perfectly for fluke," he said of his new craft. "She is so comfortable, fast, roomy, plenty of seats inside, and a full galley. I couldn't be more pleased."