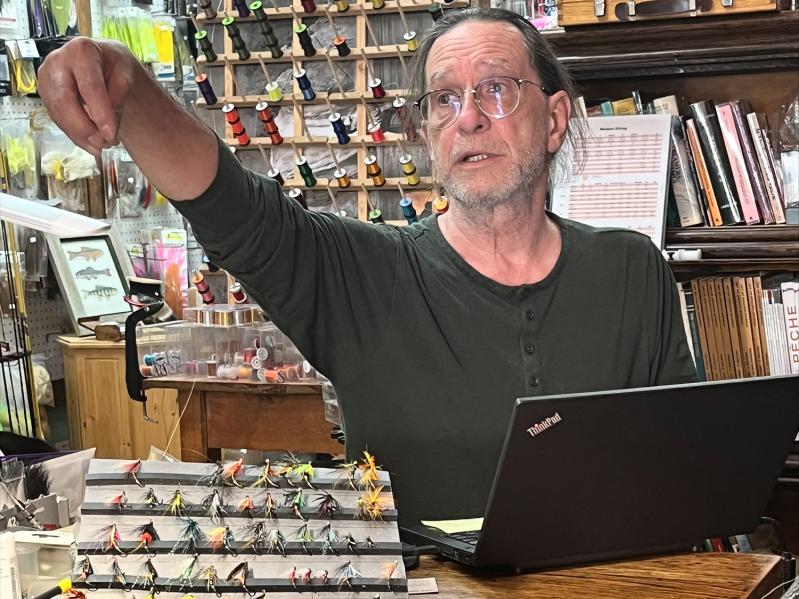 Richard Rioux of Quebec City takes pride in what he offers in his fly-fishing shop.
Jon M. Diat
By Jon M. Diat

Richard Rioux, the owner of Le Coin du Moucheur (The Flycatcher’s Corner) greeted me warmly in French as I entered his fly-fishing shop in Quebec City on Friday afternoon, but seeing that I was struggling with my rudimentary French, he quickly switched into full English language mode to make the conversation easier.

“Where are you from?” he asked as he motioned me to sit down at a wooden table in the center of the store where fly-tying equipment was on display along with dozens of handcrafted, colorful flies to catch anything from brook trout to the highly prized Atlantic salmon. The flies were almost too beautiful to be used. Truth be told, some of what he makes is to be worn on the lapels of jackets and suits. Snazzy indeed.

When I told him that I was from eastern Long Island, near Montauk, he leaned back in his chair and smiled broadly. “Ah, some really great fly-fishing for striped bass there. It’s a very popular place.”

Rioux, 71, owns the oldest fly-fishing store in the province. The store originally opened in the early 1980s; he took it over 15 years ago.

“My father was in the insurance business when I was growing up, and he loved to fish when he could,” he said. “But I was too young to go on many of the trips.”

Ironically, Rioux truly got hooked on fishing while on a trip to Old Orchard Beach in Maine. “I was standing there watching a gentleman on the rocks casting out and he was catching striped bass,” he recalled.

“I was just amazed,” he went on. “He asked me if I wanted to catch one and he lent me his other fishing rod. He was the nicest person. We were using slimy clams for bait, but we caught plenty of bass. I will never forget it.”

Rioux noted that the popularity of fly-fishing exploded in Quebec and other areas when the movie “A River Runs Through It,” starring Brad Pitt, was released in 1992. “When that movie came out, everyone wanted to try it,” he said. “And it has remained popular ever since.”

Surprisingly, Rioux said that despite the cold and dark winters in Quebec, business is brisk. “It’s actually a very busy time for me, as anglers are gearing up for the season ordering equipment, and buying or making flies.”

Rioux said that his specialized shop is “not like larger tackle shops or department stores,” and that “I only sell products I would only personally use. I’m also too poor to buy cheap!” he laughed, as I walked back to my car after a hearty handshake. A new friend was made that day.

After our visit to Quebec City, we were supposed to drive to Prince Edward Island. Alas, Hurricane Fiona brought its full fury of devastation to the island of 164,000 residents. Most of the province still remains without electricity. The side trip had to be scrubbed for another year.

A few days along coastal Maine is now on our itinerary. There are lots of tackle shops there to get some local insight and hear some fish stories.

On the local fishing scene, the stiff northeast winds and rain over the weekend put a damper on fishing efforts. Prior to the blow, action on striped bass and bluefish, as well as for porgies, sea bass, and false albacore at Montauk was good. Tuna were still hungry offshore. How quickly the fishing will rebound after the winds subside remains to be determined.

Want to catch a fluke? You better act fast as the season concludes on Sunday. Some nice catches were landed before the winds took over.

As one season closes, another one is ready to commence. Those who pursue blackfish are getting primed for the opening of their respective season.

Those who drop a hook baited with crab in Long Island Sound can retain three fish over 16 inches starting on Tuesday. The rest of Long Island waters open up on Oct. 15 with a four-fish limit.

I still scratch my head in bewilderment wondering how New York fishery managers came up with such quirky rules and seasons for blackfish. And don’t get me started on the totally wacky (and unfair) season and bag limits instituted on black sea bass, a fish that’s at record high population levels. But that’s for another story.