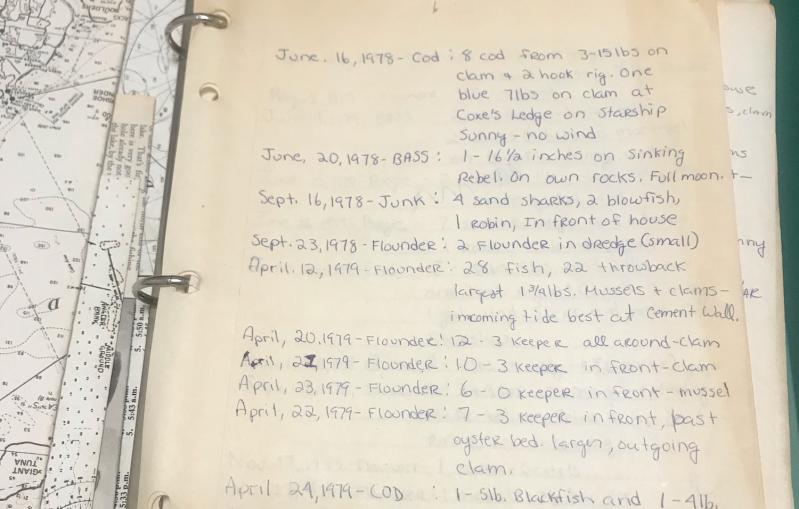 Downstairs in our house on North Haven I have a room devoted to all things fishing. When you enter and turn on the lights, it feels like a mini retail tackle shop ready to open its doors for business.

On one wall sits a pegboard that’s devoted to various hooks, lures, jigs, and rigs. Another side of the room showcases several racks of rods and reels standing at attention, ready to be used at a moment’s notice. Rods even hang horizontally on the ceiling. I also have several drawers below the counter that contain just about everything else anyone could possibly use. My credit card has certainly been severely abused over the years.

I really like to spend time in my tackle room, usually after dinner. I get a kick out of tinkering and puttering around making rigs, cleaning and servicing rods and reels, or figuring out what items I still need (if that’s even possible). I enjoy the solitude of doing what some may consider to be trivial and mundane.

The other night, I came across my first fishing logbook, started back in 1978, in which I began to inscribe my saltwater exploits when I was 15 years old. It felt much like watching the movie “Back to the Future” (minus the silver plutonium-enriched DeLorean motorcar), with Marty McFly entrusted with a rod and reel.

My first entry in the green-plastic three-ringed binder was on June 16, 1978, when I caught eight codfish aboard the Viking Starship. The fish, landed on a two-hook rig baited with skimmer clams, ranged in size from 3 to 15 pounds. I noted that we were fishing at Cox’s Ledge, a 30-mile ride to the east of Montauk, and it was a warm sunny day with no wind. I still remember that trip. It was also my first solo excursion for cod, and I was ecstatic with my catch.

Back then, pursuing codfish was a yearlong business for Montauk’s Viking Fleet. Alas, that’s no longer the case, as the fishery has fallen flat on its face over the past few decades. The cod are gone for the most part. Even Marty McFly and Emmett “Doc” Brown can’t change that.

In another entry — May 16, 1984 — I recorded 25 flounder in my bucket when I ventured aboard the Wilhelric II, an open boat that sailed from Long Wharf in Sag Harbor. Under the guidance of Capt. Artie Lach (a most colorful man of the seas that I should describe in greater detail in a future column), we fished on the north side of Orient Point, before we motored off south to Tobaccolot Bay on the east side of Gardiner’s Island. The fishing was fast and furious, no matter the location.

My largest flounder that day weighed in a shade under four pounds — a true snowshoe as locals would commonly describe it. Yet, I did not win the pool. There were other larger flatfish landed. Alas, such fishing for flounder is nothing more than a distant memory. Sadly, the youth of today would not be able to discern the difference between a flounder and a frisbee.

I have several dozen pages of notes on my fishing excursions of days gone by. Back then I considered it a chore to take time to make such notations of success or failure. I also wondered how it would ultimately serve me. But now I finally know.

Reading my reports from several decades ago rekindled many great memories of days I was most fortunate to have enjoyed. I certainly don’t remember every trip (I stopped making entries in 1992), but it was a nice stroll down memory lane. It made me smile and appreciate a time when things were a bit slower and simpler. And the fishing was darn good too. It was a nice trip back in time.

Back to the present day, the current fishing scene is winding down with every new cold front that pushes down from the north. That said, the action is good when the weather allows.

“The striped bass fishing out at Montauk remains excellent,” remarked Ken Morse at Tightlines Tackle in Sag Harbor. “And the action along the ocean beaches continues to hold up, with a few keepers in the mix too.”

Morse is running a holiday sale at his shop. Topping the list is a $1,000 gift certificate that can be had for only $750. In addition, rod and reel combos are 15 percent off, while rods themselves can be had at a 10-percent reduction, along with just about anything else in the store. Tight Lines is closed on Tuesdays and Wednesdays, and will be open until Dec. 20, before Morse takes a break for the holidays.

Capt. Savio Mizzi of Fishooker Charters in Montauk has taken advantage of some brief interludes in the weather to capitalize on the excellent run of stripers mixed in with some giant-size bluefish. “The fishing has been nonstop when you can get out,” he said.

Sinker bouncers at Montauk also continue to do well on bottom dwellers such as blackfish, porgies, and sea bass, along with a sprinkling of codfish. That’s right, a few cod can still be had if you are lucky.

We welcome your fishing tips, observations, and photographs at  [email protected].