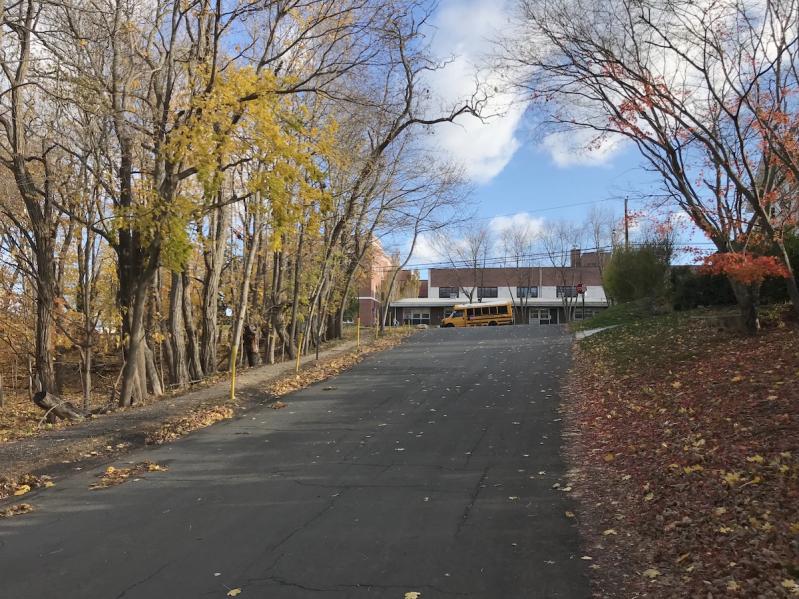 A view of Marsden Street looking toward Pierson Middle and High School in Sag Harbor.
Christopher Gangemi
By Christine Sampson

Southampton Town is willing to make good on its offer of $6 million from the community preservation fund toward the joint purchase with the Sag Harbor School District of land on Marsden Street, but on at least three conditions.

According to Tommy John Schiavoni, a Southampton Town Board member, the town board will agree to schedule the required public hearing if the school district will commit to installing a natural grass surface and dark skies-compliant lighting for the sports field it hopes to build on the site. The district must also agree to put forward "a good-faith cost estimate of the buildout," Mr. Schiavoni said, calling it "only fair" to taxpayers.

"We have extended an offer," Mr. Schiavoni, a former Sag Harbor School Board member, said by phone on Wednesday. With community preservation fund purchases, he noted, "we get to put on some covenants and restrictions."

The hotly debated Marsden Street athletic field proposal was first announced in September when the school district put on hold a bond vote that would have covered upgrades to the athletic facilities at Mashashimuet Park, where most of its fall and spring teams practice and play games. In November, Sag Harbor voters gave the school district the green light to spend money from its facilities capital reserve account, totaling $3.25 million, toward the property purchase and closing costs.

The original plan, as communicated to the press by a town attorney at the time, was for the Southampton Town Board to hold a public hearing — required before community preservation fund money can be spent — in October. That did not happen, as two versions of the narrative emerged.

"We started with a public park. They changed it to public school infrastructure," Mr. Schiavoni said. School officials have maintained all along that they said "athletic field."

According to the councilman, the conditions were communicated orally by Southampton Town Supervisor Jay Schneiderman in mid-December, a few days before a Dec. 21 community forum during which school officials answered questions from residents.

Sandi Kruel, the Sag Harbor School Board president, said on Wednesday that "there have been conversations, but we have nothing in writing from Southampton Town at this point" regarding Marsden covenants and restrictions. "We're still in negotiations," she said.

The district had invited the town board to the Dec. 21 forum, "but unfortunately they were unavailable," Ms. Kruel said.

She reiterated assurances made by Jeff Nichols, the school district superintendent, during Monday's school board meeting: There will be another public forum soon, most likely next week, for all parties to come together for discussion.

"I know that we'd love to have more conversations," Ms. Kruel said.

Mr. Nichols said by phone Wednesday that the district had already agreed to adhere to dark-skies policies in its efforts to be "good neighbors." He also said he has had additional conversations more recently with Mr. Schneiderman pertaining to the athletic field surface. The district has discovered a hybrid natural-synthetic product that may be a nice compromise, Mr. Nichols said.

"We'll look to have this product presented at the next forum so the community can learn more about it," he said.

Meanwhile, close to 300 people in the community have signed a change.org petition urging the Southampton Town Board to schedule the public hearing. The petition was created jointly this week by the Sag Harbor Elementary School PTA and Pierson Middle and High School PTSA.