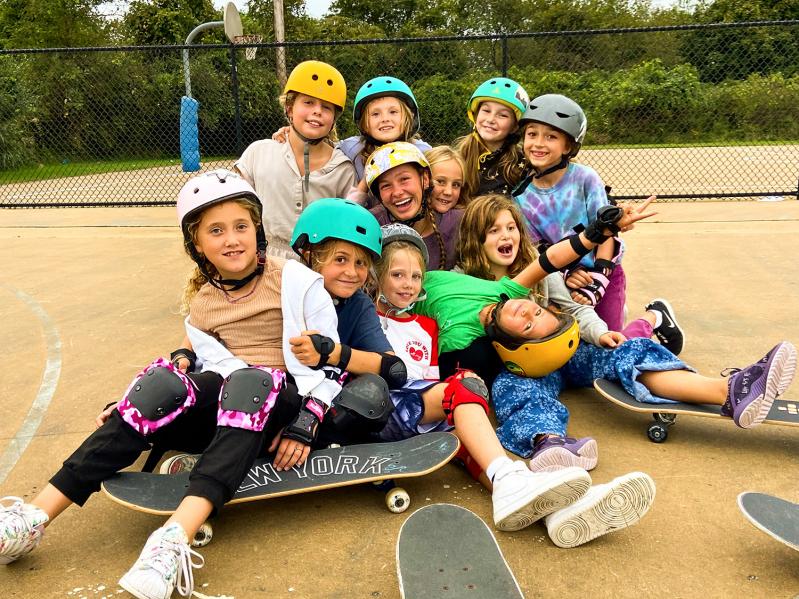 A whole lot of Loving: Jacky Loving surrounded by her young clients, who come to her for lessons in skateboarding, surfing, and other more adventurous sports
Kyle Ferguson
By Judy D’Mello

Nyjah Huston, an American professional skateboarder and a multiple world champion and X Games winner, caused a huge ruckus back in 2013 when he told an interviewer that “Some girls can skate, but I personally believe that skateboarding is not for girls at all. Not one bit.”

Today, sports like skateboarding and surfing have gained substantial mainstream traction, but they still remain male-dominated. Which is why Jacky Loving, a German-born, Montauk-based, skater, surfer, paddleboarder, hiker, and all-round adventure-seeker, prefers to live by a Beyonce quote instead: Girls run the world.

Not that Ms. Loving discriminates. Last year, she founded Loving Adventures, offering group and private classes for girls and boys on the East End, aiming to teach them life skills through outdoorsy and challenging sports. On her Instagram feed, each little square reveals videos of kids — some as young as 5 — dropping in on a skate ramp, paddleboarding in the bay, catching waves, being part of a human pyramid on the beach, even practicing goat yoga.

Even just five minutes of “green exercise” can produce rapid improvements in mental well-being, especially for children, according to a study published by the American Medical Association in 2015. Free and unstructured play in the outdoors was proven to boost problem-solving skills and focus. Socially, it improved cooperation, flexibility, and self-awareness; emotionally, it helped reduce aggression and increase happiness.

There’s a photograph on Ms. Loving’s Instagram feed that perfectly captures the pure pleasure of being in nature: A young girl is seated high on a tree limb, eyes closed, head resting against a solid trunk, her face soaking up the rays of sunlight poking through the branches. Every fiber of her body seems to be at peace. In the post below, Ms. Loving wrote, “There is magic in watching a child indulge in nature. I won’t lie, I am always worried children won’t enjoy hiking and get bored quickly. Then I get to witness the opposite. They continuously make new explorations, ask many questions, and learn from being present in the environment.”

Even on a rainy morning, she can be found with her charges on the beach. Earlier that day, for example, she had three children under 12 at the ocean. The surf wasn’t great at Napeague beach in Amagansett, so they all jumped on their boards and chased a breaching whale. When it started raining, they used their surfboards to build a tent. Beneath it, they played games and enjoyed a snack.

“I used it as an opportunity to teach them about the weather conditions, about which direction the wind is coming from, and what that does to the surf. We talked about the difference between a wind swell and a groundswell. So, a little education, a little fun, and a little nutrition,” she said with a smile.

Ms. Loving first came here about seven years ago and fell in love — “First with a guy, then with the place.” She married the man and took his name — Loving — and kept it after they divorced. They’ve maintained a good friendship since, she said.

She stayed on, working as a nanny. Word spread that Ms. Loving had a special gift with young children, and when schools shut down during Covid, a couple of local families hired her to oversee their kids’ remote schooling.

“I’ve literally never experienced someone as gifted at teaching and communicating with children,” wrote Adam Calderon in an email about Ms. Loving. His 8-year-old daughter was one of the three children under her tutelage during the worst of the pandemic.

Ms. Loving said she welcomed the opportunity to immerse herself in childhood education and began reading a stack of parenting books, “learning how I can be my best around children.” While she followed the school curriculum, she would incorporate, whenever possible, outdoor activities. “So, instead of sitting at home and writing out three plus two, we would go on a hike and pick up some rocks and sticks, and use them to learn how to add.”

It was during these outings to surf, hike, and skateboard, that she discovered the benefits of children?s interacting within a small group and bonding while tackling challenging activities.

Mr. Calderon, a Springs resident, added in his email that “I feel like teaching girls (in a safe way) these kinds of extreme sports is breaking barriers. And I’ve seen the influence on many children, particularly girls like our daughter. And [Jacky] makes an effort to do things for the community, and not just for the rich summer folks.”

In fact, Loving Adventures has partnered with Project Most, the nonprofit organization that offers extracurricular enrichment programs for local children, to provide twice-weekly skateboarding clinics at the Neighborhood House in East Hampton. Ms. Loving hopes to offer similar clinics at the Montauk Skatepark once it opens.

Additionally, she is awaiting her permit from East Hampton Town to set up a surf camp at the ocean. “I see girls being more interested in learning from another female. And something I’ve observed is that there aren’t many female-led surf schools. It’s still so male-dominated. I’m trying to have a small group clinic of up to eight children that’s female-run. Having that little motherly attention towards it.”

Big into cross-training, Ms. Loving will often incorporate other activities, like learning to stand on balance boards that she sets up on the beach. Or, she might come to your house and get the children slacklining in the garden — as in walking over a flat piece of webbing with some elasticity, that’s suspended between two trees. Or, there’s always goat yoga at Corwith Farms in Bridgehampton, for a yoga session in the company of baby goats.

“I like to do a mixup of everything,” said Ms. Loving, displaying a fresh-faced healthy glow and the beatific smile of someone enjoying a free-range life.