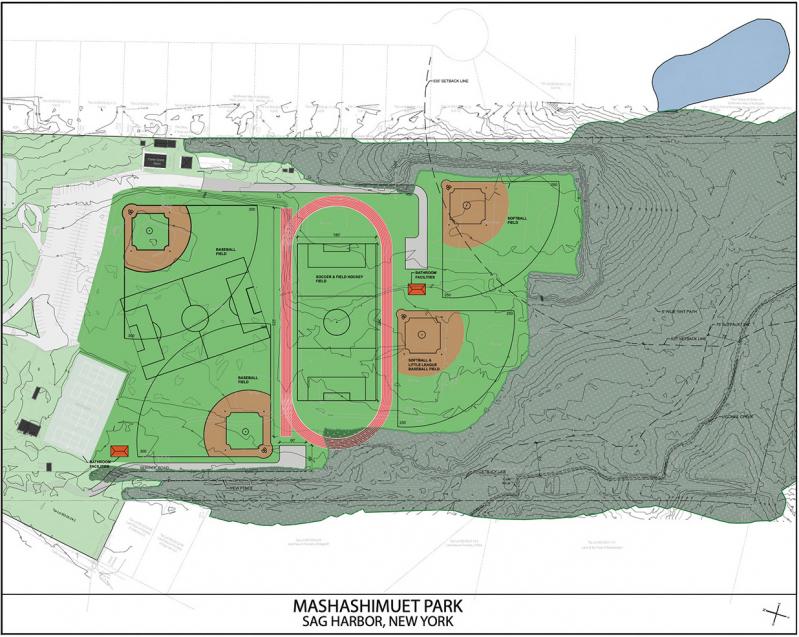 “A little bit more back-and-forth dialogue with the community would be appreciated,” Ben Gregor told the Sag Harbor School Board on Monday, as one of several parents who spoke about the $13.5 million overhaul of Mashashimuet Park that the school and park administrations have proposed.

Mr. Gregor, a parent of three Sag Harbor students, said he is concerned about losing two fields for the community’s Little League program, which had 250 players this season. Estimating that the proposed track would cost two years’ time and disrupt soccer and baseball in the process, he said he wished the district had held work sessions so that community members could share their comments.

“The plan that is at hand is kind of missing the mark for what best suits the school athletes,” Mr. Gregor said.

The Star previously reported that the school administration and park board collaborated to come up with a plan that includes not just renovated grass fields for baseball, softball, soccer, and field hockey but also a rubber-surface track, lighting, upgraded bathrooms, a safer bus drop-off area, sound system, Wi-Fi service, repaving, and safety upgrades — all within the current 13-acre developed footprint within the 45-acre park, so that forested areas don’t need to be disturbed.

Separately, the park board is taking on a renovation of the grandstand, a significant structure in village history. A long-term lease between the district and park is also in the works but has not been publicly released yet.

Mr. Gregor and other parents are also concerned that athletic facilities at the schools themselves, not just the park, are not being addressed in the proposal. Brent Green suggested that an artificial turf field be considered for the field behind Pierson Middle and High School, which had been revamped in past years. The field hockey team in particular, some parents said, needs an artificial turf field in order to safely play the game.

Jordana Sobey, a board member, reminded Mr. Green that “the public voted against turf” several years ago. Indeed, in December of 2016, voters cast 1,016 ballots against a synthetic turf project and 135 in favor of it.

“Artificial turf has changed” since then, Mr. Green said, calling it a “viable option for athletics. Many of our community members and other schools are using artificial turf.”

Kerry Perri, who in a recent email to other parents had suggested that the athletics program and facilities should be “discussed in the aggregate,” asked the school board whether the proposed $13.5 million bond would also offer “flexibility to apply those proceeds to other improvements at the school itself.”

Sandi Kruel, the school board president, said it covers only the proposal at Mashashimuet Park. “We are well aware of the facilities here that are in need, and we’ll be having discussions throughout the year on that,” she said.

Later in the meeting, the school board voted 6-to-0, with Ronald Reed, one of two newly elected members, abstaining, to formally schedule the Mashashimuet Park bond referendum for Sept. 29, a Thursday. (It happens to be the same day as the John Jermain Memorial Library budget vote.) The lengthy text of the legal notice can be found in full in the “Board Docs” database at sagharborschools.org.

“I just wanted to go a little bit more over a couple of items,” Mr. Reed said, when Ms. Kruel inquired about his abstention.

The board also approved a spring break trip to Italy for students in April 2023 at a cost of $5,085 per student.

Mashashimuet Park's History and Future
A Conference for Young People to Create Solutions
Get Outside, Get Moving
END_OF_DOCUMENT_TOKEN_TO_BE_REPLACED